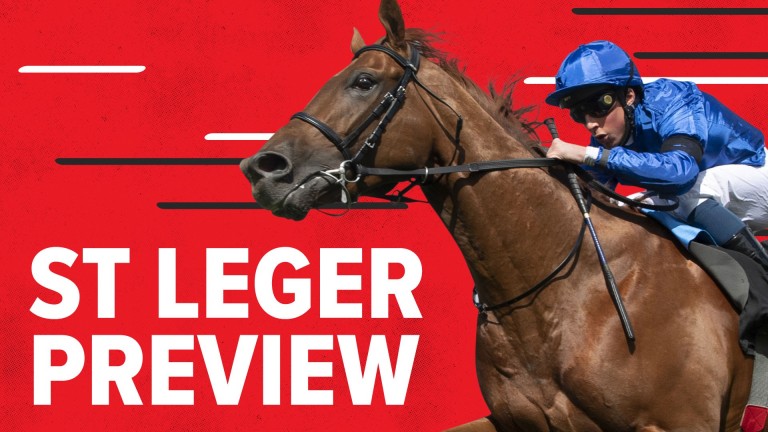 Charlie Appleby has described Hurricane Lane as the "class horse" in the St Leger field with the Godolphin trainer strong in the belief his colt will stay the extra trip.

A son of Frankel, who sired Leger winner Logician two years ago, Hurricane Lane has suffered defeat only once in six starts and that came when third in the Cazoo Derby when he was undone by a lack of experience and also lost two shoes.

Godolphin are seeking a seventh St Leger success with Hurricane Lane, and Appleby, who has yet to win the Doncaster Classic, believes the likely odds-on favourite possesses the right attributes for the 1m6½f contest. 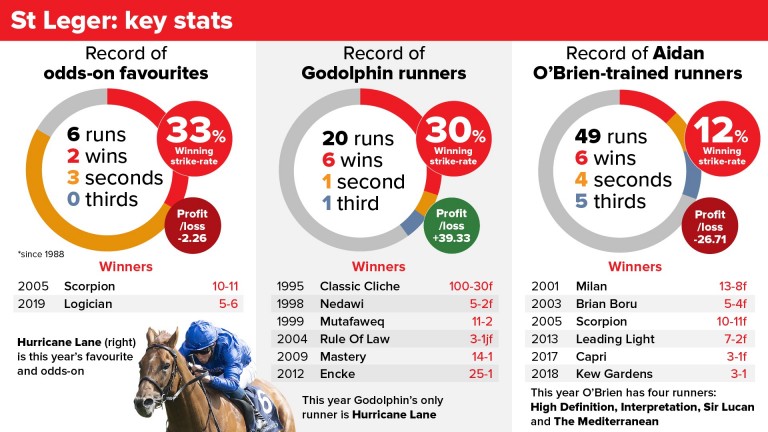 "Will they stay the extra two furlongs? Obviously, it's the big question for all of them. In his case, I think he will," the trainer said.

"He goes into the Leger with rock-solid form. We feel there is enough evidence there to say he will stay. He's the class horse in the field.

"After travelling to Ireland and France, he's mentally stronger and more mature, and he is ready for this."

Aidan O'Brien will be out on his own as the most successful trainer in British Classics history should one of his four runners claim St Leger glory.

Snowfall's victory in the Cazoo Oaks in June put O'Brien level on 40 wins with John Scott, who had set the bar for 158 years.

The Ballydoyle maestro has won the St Leger six times, which is some way short of Scott's record 16 wins, and shuffled his pack earlier this week by supplementing High Definition at a cost of £50,000.

The mount of Frankie Dettori with Ryan Moore riding at Leopardstown, High Definition was the long-time favourite for the Cazoo Derby, but did not make it to Epsom after finishing third in the Dante Stakes at York.

Having disappointed on his last two starts in the Irish Derby and Great Voltigeur, High Definition will wear first-time cheekpieces for his first try at a trip beyond 1m4f.

"The season hasn't gone right for High Definition so far," said O'Brien. "Obviously little things have happened and he hasn't shown his true form on the track as of yet. He stumbled early in the Irish Derby and maybe lost his confidence a little after that.

"He had a little rest after that and went to York. He's done very well physically for that. He looks like a horse who will stay further." 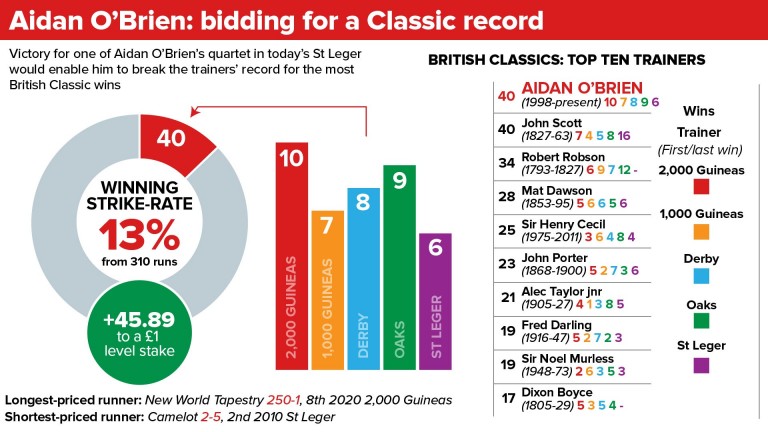 O'Brien snapped up Hollie Doyle for her first ride in the St Leger on Interpretation, who is unbeaten in three starts this season and proven at the trip, with James Doyle on Gordon Stakes runner-up Sir Lucan and Wayne Lordan riding Great Voltigeur second The Mediterranean.

O'Brien added: "Interpretation has been progressing with every run and got the trip lovely at Leopardstown last time. He's a lovely, uncomplicated and tough horse.

Donnacha O'Brien, trainer of Fernando Vichi
He's in good form. He has a bit to make up on the fancied runners, but he stays well and I think the track will suit him. We're hoping he has an each-way chance.

Richard Hannon, trainer of Mojo Star
He's got a brilliant chance, he wants this trip and the nice galloping track will suit him immensely. He's fine on any ground. The favourite's a very good horse and is one of the best-looking horses you'll ever see and Charlie's done a great job with him. But Charlie's beaten me in two Derbys this year so I'd love to get one back.

Johnny Murtagh, trainer of Ottoman Emperor
He learned a lot at Goodwood and we learned a lot about him as well. It was the first time he was racing with crowds and it was a whole new experience for him. It did him the world of good. He was a big baby but he has grown up. He has to improve, but mentally he has grown up a lot. He could improve into a very nice four-year-old. He's got the size, he's got the scope. I feel like Hurricane Lane is going to be very hard to beat. He's rated 120 and he's won an Irish Derby. 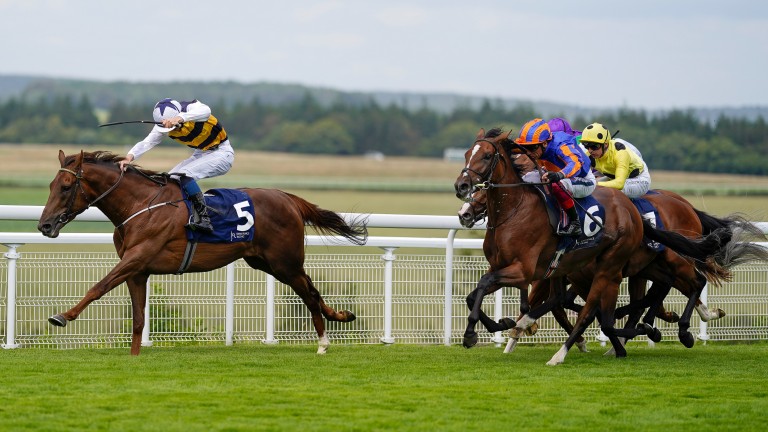 Rob Hornby, rider of Scope
He's got a bit to find and I'd love to see a lot of rain to make it a real stamina test as that's going to be to his advantage. It was a really good run at York last time as he was finding the line strongly. This trip is going to be spot on. I'll be riding him positively, going forward to expose any stamina doubts in the others.

Tom Marquand, rider of Youth Spirit
All his form ties in nicely with the horses you want it to. His only bad run ever was in the Derby and he's shown since that was a blip. The trip is a question mark, but it is for quite a few others. He's shown he's reliable, tough and has a good attitude, which are good attributes going up to this trip.

FIRST PUBLISHED 6:00PM, SEP 10 2021
After travelling to Ireland and France, he's mentally stronger and more mature, and he is ready for this