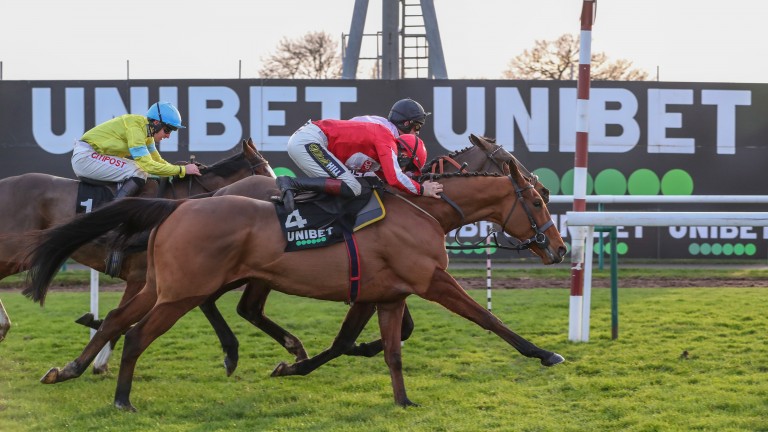 Ballyandy (nearside) : will find the ground less testing than when he won at Haydock last winter
John Grossick (racingpost.com/photos)
1 of 1
By David Carr UPDATED 8:20AM, OCT 18 2020

Switching this from mid-season to early-autumn in 2016 has ensured better ground – at a track which can get extremely testing in winter – and done no harm to the quality of runner either.

High-class hurdler the New One defied a BHA mark of 160 in 2017 while subsequent Champion Hurdle second Silver Streak was a snip off just 139 the following year.

This year's topweight Ballyandy (154) might have had better prospects on the old date, as he has run many of his best races when the ground is soft enough to bring his stamina into play.

He will do well to give the weight to up-and-coming youngsters with a string of ones to their name.

Progressive pair Marine One and Milkwood have proven themselves in good shape with recent victories and will handle this surface.

Buzz, Millers Bank and Thebannerkingrebel are among others who can be expected to take a step forward this term but it would be dangerous to underestimate Lightly Squeeze.

He won three times in the mud last winter but was running a huge race on a sounder surface in the Betfair Hurdle at Newbury, in front  when he fell at the final flight.

A good third on the Flat at Haydock last month suggests he's none the worse for that experience – and ready to resume upward progress. 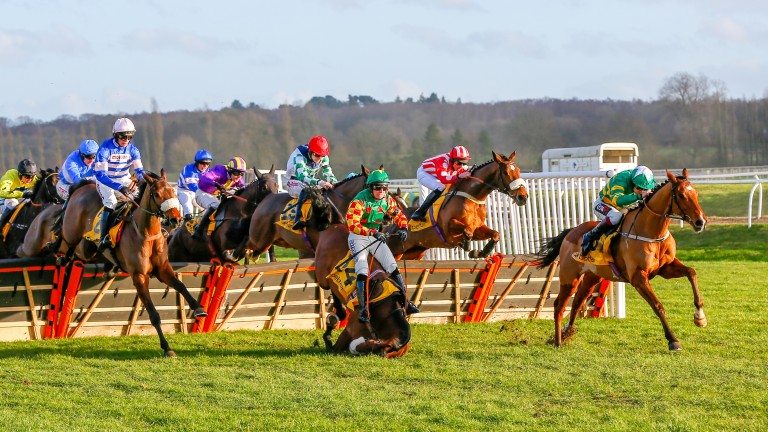 Alan King, trainer of Sceau Royal
He's had a little wind operation which might eke a little bit of improvement. He’s quite difficult to place as he'd have too much weight in a handicap over fences but has a lower mark over hurdles, which is why he's starting here.

Jamie Snowden, trainer of Thebannerkingrebel
He's in great order. He had a good novice season over hurdles, he goes well fresh and a mark of 141 is workable.

Neil Mulholland, trainer of Milkwood
He's had a nice preparation and we're very happy with him. He did it well on his reappearance and I hope the ground will suit him better this time.

Alex Hales, trainer of Millers Bank
He's a nice horse but whether or not a mark of 140 is a true reflection I don't know – there's only one way to find out.

Harry Fry, trainer of Lightly Squeeze
He's none the worse for his fall in the Betfair, he was progressive last season and we'll see if he can progress again. He was running a big race and if he can run to that sort of level it would give him a good chance.

Paul Nicholls, trainer of Ecco
I'm pleased the ground has been drying out as that should help him. I think 10st 6lb looks a nice weight for him and he should have a good chance.

Nicky Henderson, trainer of Buzz
After having a busy time with Hughie Morrison he did well for us last season. He has quite a high rating but he looks super.

Watch live races through the Racing Post website. Log in to your bookmaker account via the bookmaker button at the top of the page and look on the racecards for eligible races. Click the red 'Watch live now' icon and they're off! Find out how here
https://www.racingpost.com/news/latest/want-to-watch-live-racing/453890

FIRST PUBLISHED 6:00PM, OCT 17 2020
He was running a big race and if he can run to that sort of level it would give him a good chance

Double delight for Munir and Souede as If The Cap Fits and Sceau Royal strike Grade 1 winners do battle in a cracking novice chase worthy of a Gold Cup winner Verdana Blue and Silver Streak bid for repeat wins in a star-packed feature Analysis and trainer quotes as Barrington Court bids to continue rapid rise Analysis and quotes for the Silver Trophy, the weekend's feature jumps contest