Borice lands the 2019 Tote Galway Plate under Luke Dempsey - his trainer Gordon Elliott is looking for a hat-trick in 2020
Patrick McCann
1 of 1
By Richard Forristal UPDATED 2:52PM, JUL 29 2020

At this moment in time, as the dull parameters to which the sport of racing are confined still feel raw, the mechanical sense of routine is palpable when there should be colour and vibrancy in abundance.

Galway in the height of summer is supposed to be played out to a packed gallery, but the Ballybrit backdrop will be without any of the revelry with which it has become synonymous over the last century and a half. That’s as it is.

Nevertheless, there will still be eight winners on Wednesday. It won’t be shrouded in bedlam, but, for those greasing the wheels, there will be triumph and despair at every turn, same as there ever was.

We don’t know for how long the coronavirus is going to impact our lives to the extent it has done thus far. Regardless, though, when we look back on 2020 in years to come, there will be a Galway Plate winner on the record. That, for now, is the primary consolation.

Who will earn that privilege is a whole other matter, but it has the makings of another belter of a contest.

Gordon Elliott has farmed three of the last four Plates. His main hope Galvin has been declared a late non-runner but the trainer also saddles The Big Lense, one of four – from as many different trainers – vying to secure a seventh Plate victory for JP McManus, 42 years after Shining Flame provided the first.

McManus is also responsible for the Joseph O’Brien-trained Early Doors, who has all the hallmarks of having been laid out for this feature. Second here on his chasing debut a year ago, he won the Martin Pipe at Cheltenham before that off a rating of 145.

Off 139 now, it’s easy to see why comparisons have been drawn with McManus’s last Plate hero Carlingford Lough, although it’s worth noting John Kiely’s horse had a wealth of handicap experience over fences. Early Doors doesn’t have that, so he will need to have his wits about him under Mark Walsh, who won the race aboard Tom Mullins’ Bob Lingo in McManus’s silks in 2012.

Although nothing has been publicly confirmed following Barry Geraghty’s retirement, Walsh is effectively McManus’s first-choice rider in Ireland. Victory would constitute quite the start to that arrangement. 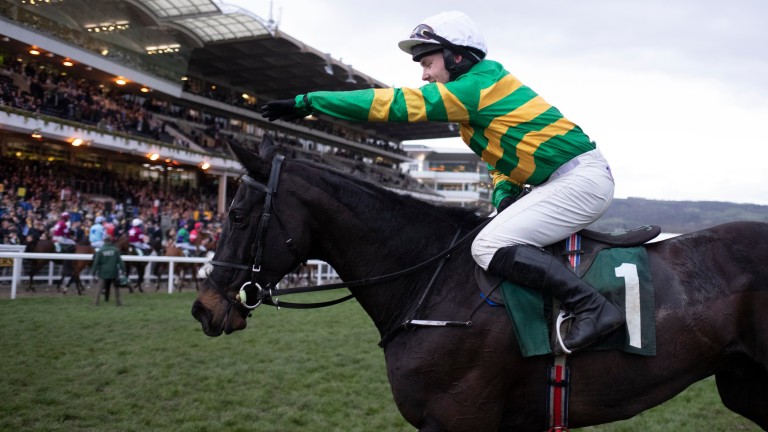 Willie Mullins, for all of his domination of the steeplechasing ranks, so far has just a solitary Plate on his crammed CV, that being Blazing Tempo’s 2011 triumph under Paul Townend.

He will saddle McManus’s Blazer this time, and, while the market suggests Easy Game is the Closutton maestro’s first string under Patrick Mullins, Townend is pencilled in for Royal Rendezvous.

Another significant jockey booking is Rachael Blackmore aboard Spyglass Hill, whose trainer Henry de Bromhead has won the race twice since 2015 and also has Sub Lieutenant here.

Blackmore established herself as the big-race queen last season, plundering six Grade 1s with tremendous zeal. This is the unequivocal summer highlight of the jumps season, so expect her to be there in the thick of it. In her element.

FIRST PUBLISHED 6:00PM, JUL 28 2020
You’d think a fourth for Elliott might put him in the hunt as the race’s most successful trainer, but Paddy Sleator farmed nine up to 1976