The Buzz horse: is the Cesarewitch winner able to follow up in Ascot Grade 2? 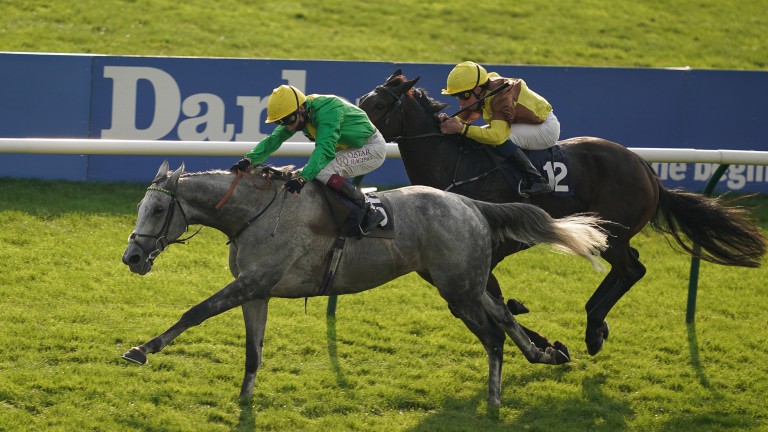 Buzz (left): got the better of Burning Victory in the Cesarewitch
Alan Crowhurst (Getty Images)
1 of 1
By Graeme Rodway and David Milnes UPDATED 7:51PM, NOV 19 2021

There has been a bit of a buzz about Buzz since he won the Cesarewitch at Newmarket last month, but let’s not forget he was a 155-rated hurdler competing off a Flat mark of just 96 and was therefore entitled to win as he did judged on his Grade 1 jumps form.

Buzz probably didn’t even need to improve, yet his price tumbled for the Stayers’ Hurdle. This is a tougher test and we should learn more about his Grade 1 prospects in this Grade 2.

Buzz has run in only one Grade 1 over hurdles and it looked a weak one as well. That was the Aintree hurdle in April when he finished runner-up, meat in the sandwich, between the winner Abacadabras, who perennially falls short at the top level, and 147-rated third Millers Bank.

A Racing Post Rating of 157 for that run suggests Buzz only reproduced his Betfair Hurdle fifth in order to finish second in a Grade 1 and nine of the last ten winners of this bettered 157. Buzz could still improve, but he is short of the standard often required to win this event.

Goshen isn’t short of the standard on his best, but he definitely falls short on his last two runs, which include a wild hanging incident at Cheltenham and a below-par effort at Punchestown.

It’s getting harder and harder to know what to expect from the Gary Moore-trained five-year-old, but his highest RPR of 165 at Wincanton last season sets the standard.

Song For Someone was the recipient of the lowest RPR (157) of all winners of this race in the last ten years when successful last season, but he did record 159 at Cheltenham in December.

He struggled in two runs after, though, and wind surgery isn’t a positive. His trainer Tom Symonds is just 1-21 with runners having their first start since an op (-£14 to £1 level stake).

The final point regards Molly Ollys Wishes. She is the only mare in the line-up and gets the generous 7lb mares’ allowance, minus a 4lb penalty for her Listed hurdle win at Wetherby.

If you had backed all mares in Grade 1, 2, or 3 hurdles which weren’t handicaps or confined to mares in Britain since the start of 2020, you would have found six winners from 32 runners (18 per cent).
Race analysis by Graeme Rodway

Buzz 'back to his day job'

Buzz will find taking on just four rivals different from his previous assignment in the Cesarewitch Handicap at Newmarket last month when he faced 31 opponents, but connections hope for a bold show on his return to hurdling.

The grey broke the Willie Mullins monopoly in the Rowley Mile marathon when coming late to win by a length and a half in the 2m2f test, and he tackles just a furlong further on his first start over jumps since finishing second in the Grade 1 Aintree Hurdle in April.

James Stafford, spokesman for owners Thurloe For Royal Marsden Cancer Charity, said: “While Buzz was going up in the ratings as a hurdler in the 150s, it seemed to be logical that his Flat rating of 96 was something we could work on. The Cesarewitch was a valuable race and thankfully it came off, which was exciting for the whole team.

“Buzz is back to his day job now, but it’s a bit different with only a few runners and hopefully there’s some pace in the race.

“Even with a run on the Flat under his belt, it’s no forgone conclusion and the ground could be an issue, as it is for everybody at the moment. It’s probably tacky around the back and fast up the straight, which is not ideal.

“This looks a good starting point for him over two miles and three furlongs, then we could look at stepping him up in trip, but we didn’t want to go three miles to begin with and then have to drop him back.”

Gary Moore, trainer of Goshen
Any more rain would be nice but I don't think we'll get any and I see the trip helping him on this better ground. I don't see any reason why he won't stay. Whether he's good enough, we'll see. He's sure to come on for the run but he's as fit as I can get him at home. He's working as well as ever and if he were to run well, it would give us more options for the rest of the season.

Tom Symonds, trainer of Song For Someone
He won the race last year, so it made sense to start him back off in it, although he came in a bit later this year as we had him hobdayed in the summer. It looks a stronger race than last year and hopefully the ground isn't too quick, but he's in good shape.

Nigel Twiston-Davies, trainer of Guard Your Dreams
We're looking forward to it. It's a step up in class for him but he couldn't have won any better the last time at Cheltenham. I'd like to think he's improved for that run and he's got some good form in the book.

Dan Skelton, trainer of Molly Ollys Wishes
I give her a little squeak. Obviously Buzz is going to be hard to beat, but we've got a run under our belt and I think she's more effective going right-handed than left. She gets weight being a mare but it's a good race.
Reporting by David Milnes

FIRST PUBLISHED 6:00PM, NOV 19 2021
I think she's more effective going right-handed than left. She gets weight being a mare but it's a good race

Royal Ascot capacity to be reduced this year to offer an 'improved experience' Another Aramax? Boodles favourite Britzka out to cement Cheltenham credentials Which handicap hurdler does the trainer believe to be 'very well handicapped'? Is Constitution Hill as good as he looks? What times tell us about a rising star Horse of the Year Probabeel invited to run in Queen Anne Stakes at Royal Ascot