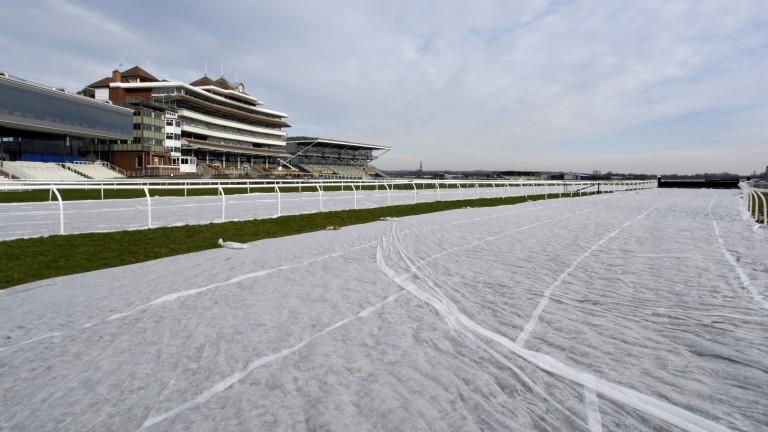 Newbury: frost covers have been down since Friday
Edward Whitaker
1 of 1
By Peter Scargill UPDATED 9:42AM, FEB 27 2018

Saturday's big-race fixtures at Doncaster and Kelso are already under threat with heavy snow and freezing temperatures forecast.

Kelso is due to host the Grade 2 totescoop6 Premier Kelso Novices' Hurdle and Listed totepool.com Premier Chase, which could feature the likes of American and Bristol De Mai.

Anthea Morshead, clerk of the course, said: "We're forecast a lot of snow later in the week and freezing overnight temperatures. The temperatures also won't get up much above freezing during the day.

"On the forecast we're pessimistic, but we're talking to the BHA about potentially saving the fixture for the following week."

The William Hill Grimthorpe Chase takes place at Doncaster on Saturday and clerk of the course Roderick Duncan said: “The course has been covered since Friday and there's significant snowfall and freezing temperatures forecast.

“The worry is if the daytime temperatures don’t get up high enough to thaw whatever we get on top of the covers. Unless there’s significant improvement in what we’re forecast for Friday and Saturday, we have to view the meeting as at risk.”

Covers are also down at Newbury, where the Greatwood Gold Cup is the Saturday highlight. Like Doncaster, they are also due to race on Friday.

Richard Osgood, clerk of the course, said: “We've had covers on since Friday to stop any frost getting into the ground. The temperature is set to drop all week so we’ll have to see how we are in a few days. We're also at risk of snow on Thursday.”

There will be no turf racing in Britain until at least Friday (Clonmel is scheduled for Thursday in Ireland) after the weather forced officials at Catterick, Musselburgh and Ludlow to cancel their meetings on Tuesday, Wednesday and Thursday respectively.

Even the all-weather cards have not been completely immune to the effects of the cold snap, as Tuesday's replacement all-weather fixture at Chelmsford had to survive a check on the morning of racing with amber weather warnings in place.

The BHA has scheduled 'bumpers for jumpers' fixtures on the all-weather at Southwell on Friday and Newcastle on Saturday.

Paul Johnson, BHA head of racing, said: "Hopefully they'll provide an opportunity for those horses ready to run, as well as keeping the show on the road for the betting public.

"Our thanks go to the Levy Board for their continued support and Arena Racing Company for their assistance in scheduling these extra fixtures."

FIRST PUBLISHED 6:16PM, FEB 26 2018
The worry is if the daytime temperatures don’t get up high enough to thaw whatever we get on top of the covers

Return of owners to racecourses scheduled for March 29 as BHA sets out roadmap Doncaster willing to stage pilot event despite £250,000 hit last year Warren Greatrex expresses frustration after son picks up seven-day riding ban Punters think Venetia Williams pair can upset favourites in Graded events Could history repeat itself with novices the way to go in the Betfair Hurdle? Last week's loss is this week's gain as top-class action builds to Ascot Chase