You might have thought the miracle recovery Jack Kennedy performed to stay on Robin Des Mana and win a race at Clonmel would not be repeated for a while.

Think again though, as two stunning saves came along in quick succession on Saturday.

First, Tony Kelly looked more acrobat than jump jockey on Captain Mowbray at Wetherby and then Shane Shortall also did his prospects of a post-riding career with the circus no harm at Aintree.

Kelly, riding in Wetherby's novice handicap chase, seemed set for a smooth victory on the Rebecca Menzies-trained Captain Mowbray, but any thoughts of calculating his winning slice of the £6,000 prize went out the window when the son of Shami made a mistake two out, nearly ditching his rider. 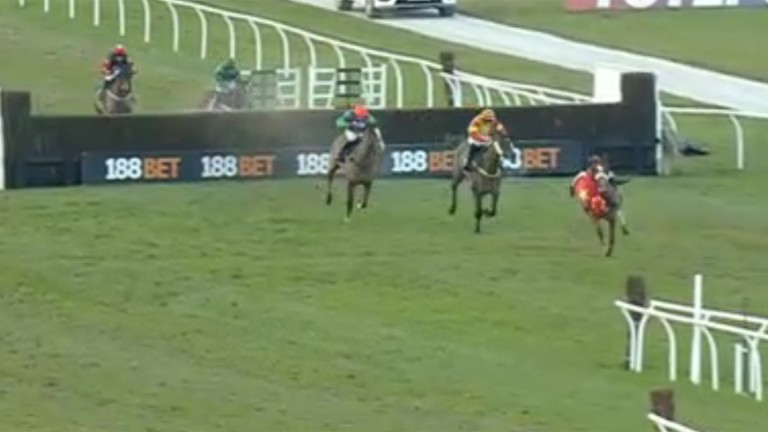 How did he do that? Kelly is all but unseated by Captain Mowbray
RACING UK

The 28-year-old was able to regain his balance, but with irons lost and whip dropped, the duo's cosy advantage was relinquished to Big Meadow, who jumped the final fence in the lead.

However, he was soon joined by Kelly and Captain Mowbray, who rallied for a three-quarter-length verdict after £5.32 was matched at prices ranging from 95-110 on Betfair.

Reflecting on the dramatic incident, Kelly said: "It was the first time that Captain Mowbray had been in front in his life at the second-last and he went through it as he was having a look around. I was hanging on to the breast girth at one point and I lost both pedals but he was still facing the right way, which helped when I managed to ease myself back up.

"I've had similar incidents in the past but never got back up to win. The horse has been a bit unlucky throughout his career but we got lucky in spades today."

At Aintree, Shortall was not quite as successful as Kelly and Kennedy, but his efforts in finishing fifth on Grey Waters in Aintree's juvenile hurdle for fillies should not be underestimated.

Hang on a minute! Shortall shines in the saddle, sort of
Martin Lynch / racingpost.com/photos

Riding the three-year-old for Joseph O'Brien, Shortall found himself clinging desperately to the grey's neck after the last hurdle.

A departure looked inevitable, but the jockey managed to defy gravity and regain his balance on the daughter of Mastercraftsman, who was well beaten despite Shortall's spectacular save.