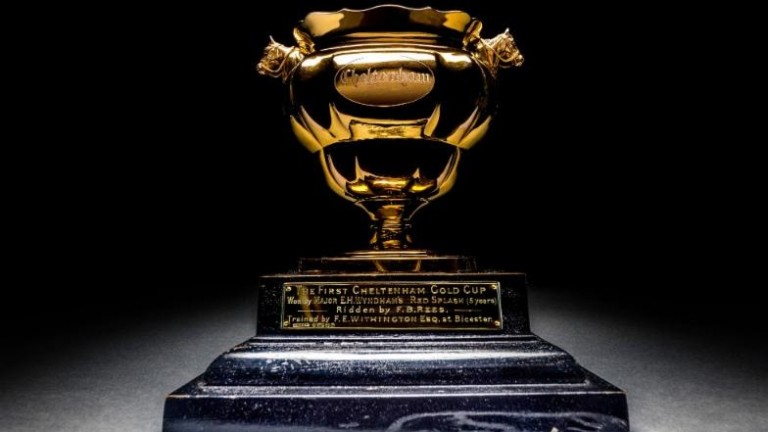 The original Cheltenham Gold Cup will be presented as a perpetual trophy to the winners of the festival highlight after the racecourse was reunited with the prize.

First presented in 1924, the trophy has been in the bank vault of its previous owner since the 1970s. However, it will now be mounted on a plinth bearing the names of every horse to have won the contest.

Weighing 644g, the history of the original Cheltenham Gold Cup – made of nine carat gold and plated with 18 carat gold – is unclear since it was awarded to connections of winner Red Splash.

Yet after being approached by the former owner, Cheltenham took the opportunity to bring the trophy back into the fold for the first running of the race sponsored by Magners in 2019, making it the first time the Cheltenham Gold Cup has changed since 1972.

Ian Renton, the Jockey Club’s regional director for Cheltenham and the south west, said: "To bring the first ever Cheltenham Gold Cup trophy back to its rightful home and to use as the perpetual trophy really demonstrates the rich history and heritage of the race.

"It's a beautiful, decorative trophy – dating back almost 100 years – and it will sit perfectly on the winner's podium come March next year, when we crown the next Magners Cheltenham Gold Cup champion."

Jason Ash, chief marketing officer at C&C Group plc, owners of Magners Cider, added: "We have no doubt that the history, heritage and prestige of this great race will be enhanced through the reintroduction of this beautiful cup as originally presented back in 1924.

"On behalf of millions of National Hunt fans in Britain, Ireland and beyond who are already turning their thoughts to next year's festival, we would like to congratulate the Jockey Club on bringing the original Cheltenham Gold Cup back home to Cheltenham."

FIRST PUBLISHED 6:00PM, SEP 28 2018
We have no doubt that the history, heritage and prestige of this great race will be enhanced through the reintroduction of this beautiful cup