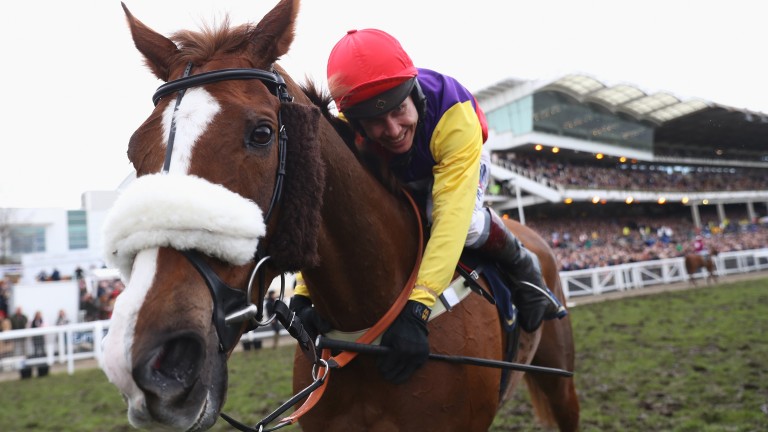 If there is one thing Native River loves, it is attention. Whether that is jumping emphatically, leading the field in some of Britain’s greatest chases, or just popping his adoring white-blazed face out of his stable door, he simply loves having all eyes on him.

While he may be gentle and calm at his Dorset home, on the racecourse he is ruthless. Supplementing his supreme natural talent is a mind perfectly designed for the job of a National Hunt racehorse – fearless, courageous and simply brilliant.

Joe Tizzard, assistant to his father and trainer Colin, has shared a close relationship with him throughout his career and says: “He’s as soft as soft in the stable and he always wants a stroke no matter who it is – he’d nuzzle into anyone. He’s lovely to ride but you know he’s got that class about him.

“On the racecourse he’s just mentally tough and I don’t think people realise how great that can be in horses. He comes back for more every time, even in those big gruelling races.”

That view is shared by his regular rider Richard Johnson, who says: “He’s a great horse to have – he tries very hard both on and off the racecourse. He’s uncomplicated, a lot of horses need the race to be run a certain way or can get upset by things but he’s just very straightforward. He’s ideal for a jockey.”

“You’d have to say his attitude is his best asset. He’s naturally talented, without a doubt, but it’s the attitude which makes the difference between winning and losing those sort of races. He jumps and stays very well but it’s his mind which is the main thing.”

Garth and Anne Broom, who go under the banner Brocade Racing, have owned him from the day they first met him. Although they very nearly missed out on their future Gold Cup winner.

Garth Broom reveals: “Tom Malone rang us up out of the blue and said ‘I’ve got a nice horse down here but it’s not your normal type, just come and have a look at him’. He was only a few miles away so we thought we’d take a look at him, we only really went out of courtesy. 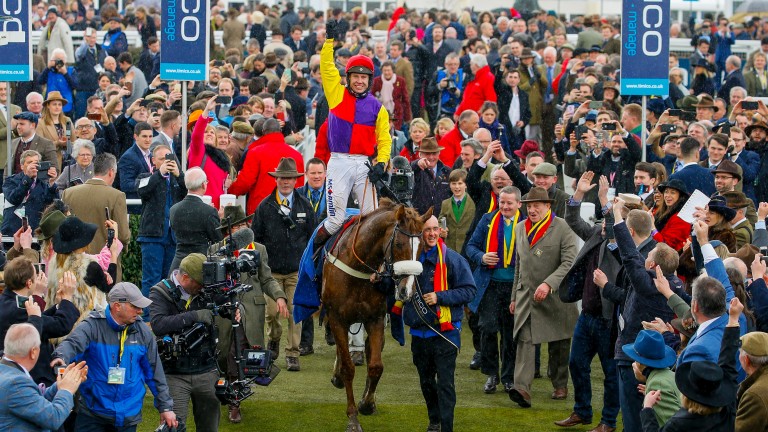 Native River is led back in after winning the Gold Cup
Mark Cranham (racingpost.com/photos)

“As soon as Tom brought him out we really liked him. He was so athletic and an absolutely beautiful mover so we thought we’d take a risk on him. We weren’t expecting anything, we thought he’d be okay. I suppose it must have been fate.”

Due to his part-owner’s first name he was given the nickname ‘Garfield’ by the team at Venn Farm stables, and his connections had to be patient before the strapping chestnut – renown for his striking four white feet – could fulfil his mighty potential. His best win as a novice hurdler was a Listed event at Exeter, while the following season over fences had mixed fortunes.

“He turned up to us as quite a weak horse but was just very progressive from his bumper into his novice hurdle season”, adds Tizzard. “He stepped up when he was a novice chaser and that’s when we started to realise he was very good. He’d filled out physically and just kept improving.”

In his novice chasing campaign he won a Grade 2 event at Newbury but was denied a Cheltenham Festival win when second to Minella Rocco in the National Hunt Chase. He quickly made amends at Aintree, but Broom knew he was only just getting started.

“When he won at Aintree we knew he was a serious horse,” he says. “Because he ran in the four-miler people thought he was a bit of a slogger. He was always a little underestimated but we saw what he was capable of in the Hennessy [now the Ladbrokes Trophy] and Welsh National. I thought they were two amazing performances.

“We aimed him for the Gold Cup, but when he finished third we thought that was our chance. We were gutted we didn’t get second but we were happy. You normally only get to the Gold Cup once, I’m glad we were wrong!”

Satisfaction from that Gold Cup third would become euphoria for Native River’s camp just one year later. His 2018 Gold Cup was a moment of bravery of the highest calibre. Native River battled with a warrior-like determination to deny the strong-travelling, and hugely talented, Might Bite. This was his crowning moment and he certainly deserved it. 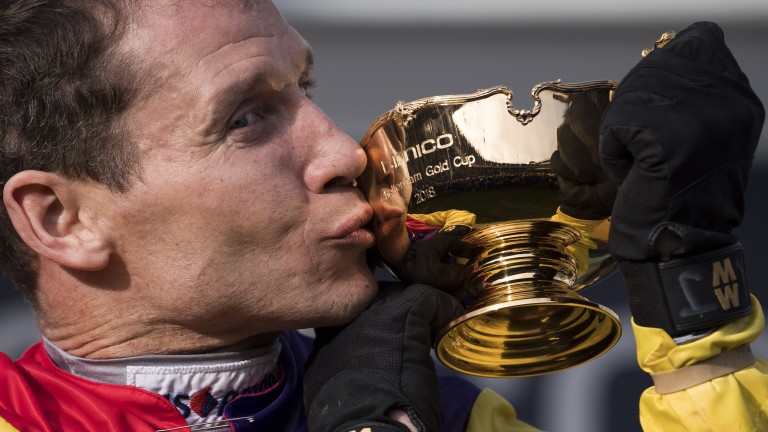 Richard Johnson has racked up an incredible 3,715 British jumps winners, but perhaps the 2018 Cheltenham Gold Cup is his finest.
He reflects: “The Gold Cup is the most important day of the year so it was a really special day. Those final few fences were brilliant, you wish you had more rides like that. Every time I asked him he just kept responding. I will never forget that moment from the second-last up the straight. It was the moment you dream about.”

It was a race for the ages. In years to come it will be remembered as the Native River/Might Bite Gold Cup such was the battle that unfolded and Joe Tizzard remembers that life-changing afternoon in March, but admits it was all a bit of a blur.

“Funnily enough I was chatting to a friend in the paddock during the first circuit, I was watching it but not too seriously,” he says. “With a lap to go things had really heated up and I started to believe, I knew all of the way he just wouldn’t stop galloping.

“I worried Might Bite was going to outpace us, and even down the hill he looked hard on the bridle, but between the last two we knew what he could do. He’s as hard as they get so it was just incredible. There’s a lot of hard work that goes into what we do, so it was a dream come true.

“The day was a bit of a blur – not because we’d been celebrating too hard – just because things seemed to happen so quickly. It was the next day in Virginia Ash [pub] where things started to sink in. There were about 1,000 people who’d come along to congratulate us and the horse, it really hit home what we’d achieved.”

Meanwhile the Brooms continue to relive the win: “I still don’t think we can quite believe we’ve won the Gold Cup, even now,” adds Broom. “We’ve watched the race back so many times!”

After a confidence-boosting win on his only start this year at Aintree, Native River heads to Newbury this weekend looking for a third win in the Betfair Denman Chase. The optimism remains sky high, with a fourth attempt at the Gold Cup on the cards next month.

Tizzard says: “The [2018] Gold Cup left it’s effect on him last year, he performed to a high standard but not quite his best. This season he’s back in and much better in himself. He’ll have to take on younger horses at Cheltenham but he’s in great form and he deserves to be there.” 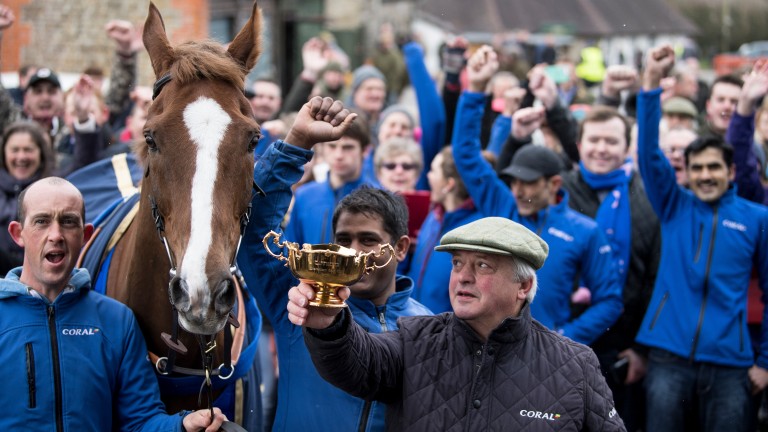 Regardless of what happens next, Native River and his passionate allegiance of supporters know he owes them nothing.

His beaming part-owner concludes: “He’s the most genuine horse you could wish to have and has just been an amazing horse to own. He’s so soppy at home, he loves his big cuddles but on the racecourse he’s a different character, he’d run through a brick wall for you. We’re so lucky to have him.”

Tizzard shares the feeling: “We love him. With his big white blaze and his four white feet you can never miss him. He’s such a pleasure to have in the yard, he really is.

Johnson is desperate to return from injury in time to ride him at Cheltenham again, and is full of praise for Native River: “He’s been in three Gold Cups, winning one and finishing in the top four twice – to get to another one is an incredible feat in itself. He’s a dream for the owners, I know they love having him. He’s a favourite in the Tizzard yard and he’s a favourite of mine too.”

Amy Nichol from Oxfordshire got in touch to tell us what the 2018 Gold Cup winner means to her . . . 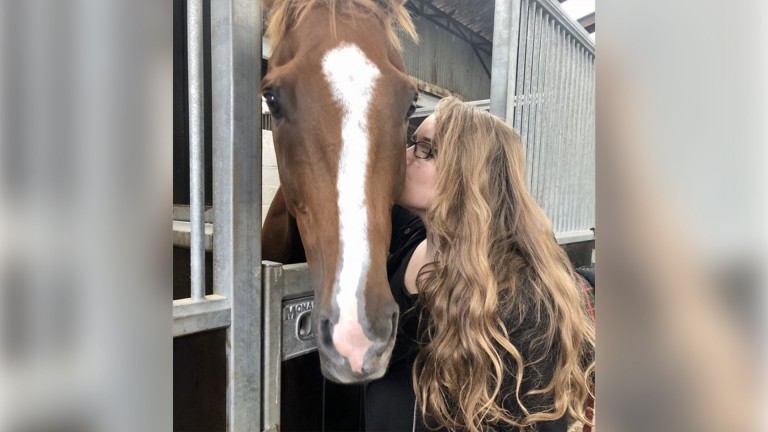 There is nothing better than a racehorse who wears his heart on his sleeve and tries to run the finish out of his rivals, and no horse does that quite like Native River.

A relentless galloper and exuberant jumper, he’s a horse you can’t bare to see lose.

He’s hugely consistent and that’s what makes him so special – watching him win is always exhilarating.
His Cheltenham Gold Cup win on heavy ground was simply amazing.

Most would shy out of such a challenge but he relished the test as he and the gallant Might Bite went at it like gladiators.

Might Bite was a fantastic horse, but a flick of the tail coming up to the line told the King George winner exactly where he stood.

He’s a horse who looks like he’s having fun out there, and that’s what every racing fan loves to see.

GET INVOLVED! Let us know why you love next week’s Fans’ Favourite LALOR and we will print the best. Email Weekender@racingpost.com or Tweet @RPWeekender

FIRST PUBLISHED 10:00AM, FEB 6 2020
We love him. With his big white blaze and his four white feet you can never miss him

Lady Bowthorpe: 'Even on Newmarket Heath, people know who she is' Bollin Eric: 'He just had natural ability - he could do anything'