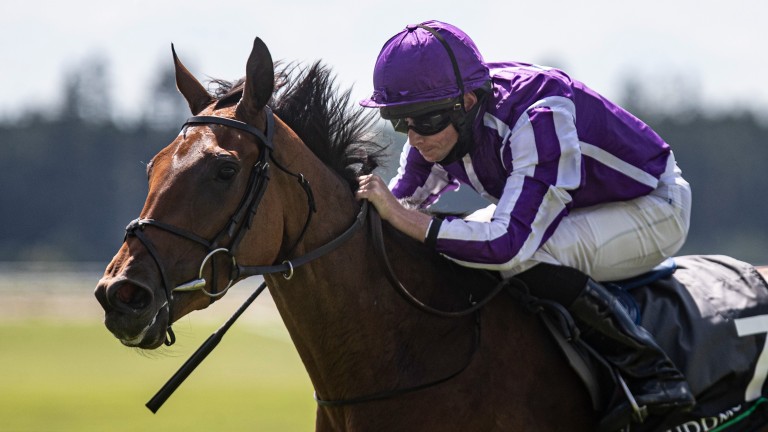 Snowfall: won her second Classic of the season in the Irish Oaks on Saturday
Patrick McCann (racingpost.com/photos)
1 of 1
6:00PM, JUL 19 2021

Two high-class three-year-olds dominated when it came to star performances last week as Hurricane Lane roared to victory in the Grand Prix de Paris and Snowfall shot clear in the Irish Oaks.

Also successful in the Irish Derby, Hurricane Lane, representing two per cent of stables, earned 29.1 points for his commanding effort at Longchamp, while 0.1 per cent of teams had Prix de l'Arc de Triomphe favourite Snowfall, who registered 58.7 points.

The way Mehnah went about her business in a Listed event at Killarney suggested she could soon be moving up in grade and her effort resulted in 16.2 points for 1.4 per cent of Ten To Follow stables.

She races in the familiar blue silks of the Shadwell operation, whose Mutasaabeq outclassed his Haydock rivals for 12.2 points. He was the most-picked winner of the week with 18.6 per cent of players counting on the smart three-year-old.

Just 0.4 per cent of teams relied on Golden Pal, who is 17.25 points better off after landing a Grade 3 at Saratoga.

The same number of stables were with Hackwood Stakes winner Happy Romance (30.3 points), while just six stables identified old favourite Accidental Agent, who had not got his head in front since his shock Queen Anne triumph in 2018 but got back to winning ways at Newmarket, earning 27.4 points in the process.

Valia, a Group 2 winner at Longchamp, also got in on the act, earning her 0.2 per cent of supporters 22.95 points and another French fancy to shine was Victor Ludorum, who was way too good for his rivals in a Group 3 at Chantilly. He carried the hopes of 0.6 stables and provided them with an 18.8-point haul.

2021 Prix de l'Arc de Triomphe: essential info for the big race at Longchamp Alpinista’s European adventure takes her towards the summit in Ten To Follow How Adayar and Hurricane Lane could ruin each other's Arc prospects 'He holds some brilliant form' - Marquand excited about Arc dark horse Alenquer What's on this week: all eyes on quality Arc as Longchamp takes centre stage Adayar v Hurricane Lane: our experts disagree on who is the better Arc candidate