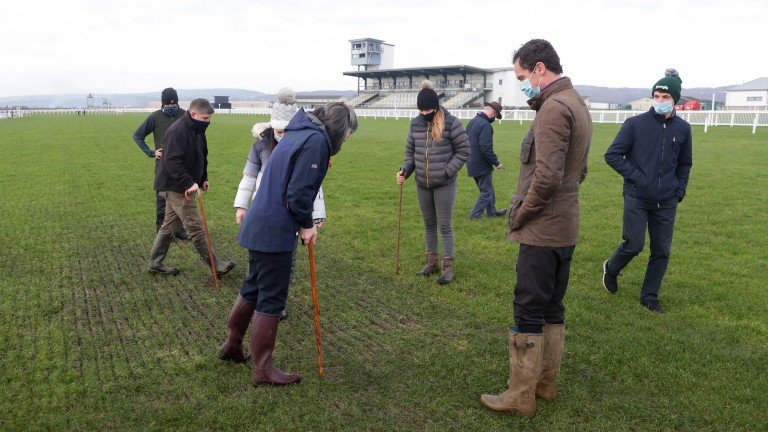 Jockeys, trainers and officials observe the course during the fourth inspection at Ffos Las
Getty Images/Pool
1 of 1
By Matt Rennie UPDATED 12:28PM, JAN 8 2021

Jamie Snowden claims trainers and jockeys were happy for racing to go ahead when Ffos Las cancelled its meeting on Thursday just minutes before the trainer was due to saddle his only runner of the day.

The Welsh track had survived three inspections before a fourth was called at 12.15pm with jockeys, trainers and their representatives as well as the clerk of the course and the BHA stewards in attendance.

After lengthy deliberations between the parties, the decision was made to cancel the seven-race card because of a frozen track half an hour later – 13 minutes before the opening 2m novice hurdle was due off at 12.58.

Comment: impossible not to sympathise with racecourses – but they must be more decisive (Members' Club)

Snowden, who was set to be represented by Sandaroc in that race, was disappointed with the manner in which the fixture was cancelled.

"It's frustrating to call it off minutes before the first race when the jockeys and trainers were happy for it to go ahead," he said. "If you did not want to run your horse, you didn't have to, and we were certainly all keen to see it go ahead. It's especially frustrating at this time of year in the current crisis.

"It is what it is and welfare must absolutely come first, there is no doubting that. We felt it was okay though, which is frustrating." 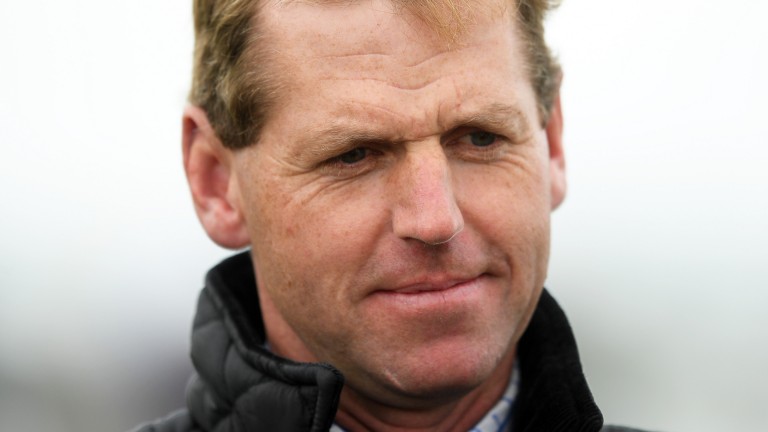 Jamie Snowden: "It's especially frustrating at this time of year in the current crisis"
Getty Images

The trainer did not make the six-hour round-trip from his Lambourn yard, but his representative at the track also felt the track was suitable for racing.

Snowden added: "My travelling head girl Alex Walters was there, walked it with the jockeys and trainers who said they were happy with it. The stewards said some trainers weren't happy with it, but they saw the track at ten o'clock as opposed to seeing it at half past 12, which is when we were happy for it to go ahead."

The stewards ordered racing to be cancelled due to concerns about frost in the bypass areas of fences which had not sufficiently thawed out in time for racing.

Clerk of the course Dai Jones also expressed his disappointment in not being able to stage racing and explained why it was not cancelled earlier.

"We're very disappointed and it's totally gutting, but you can understand both sides of the argument," he said. "We gave it every chance and unfortunately the temperature did not rise as it was forecast to this morning.

"Initially we didn't have the bad frost overnight, but from 6.30am it went back into a cold snap to -2C. It was supposed to rise from nine o'clock onwards up to 4C but the sun went back behind a cloud for half an hour. Unfortunately, it didn't come back out in time.

"When I walked it with the BHA inspector and stewards earlier, they decided it would be best to give it more time. The racing line was fine, it was outside the fences in a couple of places where if we needed to bypass a fence or there were any loose horses, they were worried frost would still be in the ground."

Jones also defended the decision to call off the fixture at such short notice before the first race but understood the dismay among trainers.

He added: "If I didn't think there was a chance of it going ahead, I wouldn't have risked people travelling here. I fully understand how far it is, I've had to travel a long way here before too and it isn't the nicest.

"If we didn't have a good chance this morning, we would have stopped it. We were confident in the forecast, but unfortunately it's come back to bite us."

Members' Club: how to become the best punter you can possibly be

FIRST PUBLISHED 4:34PM, JAN 7 2021
It's frustrating to call it off minutes before the first race when the jockeys and the trainers were happy for it to go ahead

Christophe Soumillon loses job with Aga Khan after Saint-Cloud incident 'This Derby entry ran a debut race full of promise' - last week's tracker horses 'We really need some rain' - Daly 'terrified' as dry ground hurts preparation 'He deserved a win' - track specialist Flint Hill does it again for Jefferson 'If I didn't have this place I don't know how I'd make it back' Can class-dropping Just Fine give King Charles his first winner?