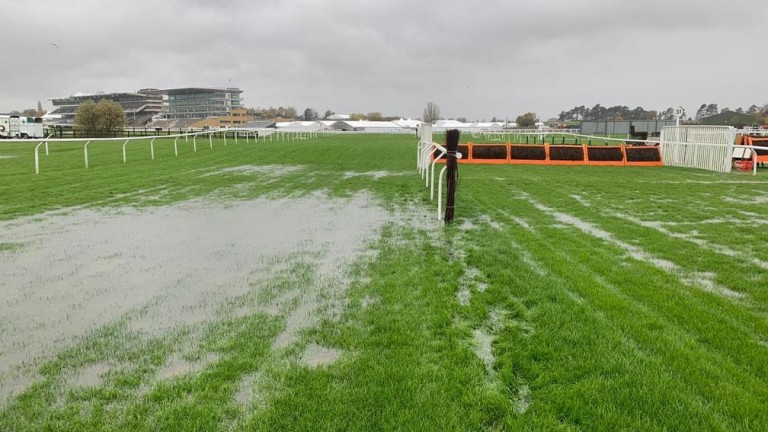 Cheltenham: the opening day of the November meeting has been cancelled
Cheltenham Racecourse
1 of 1
By Graham Dench UPDATED 8:59AM, NOV 15 2019

Clerk of the course Simon Claisse is optimistic the remainder of Cheltenham's prestigious November meeting will go ahead after upwards of 37mm of rain in 18 hours left parts of the track flooded and forced the abandonment of Friday's card at lunchtime on Thursday.

Claisse has only once seen standing water to compare with it, but the weather forecasts are encouraging and he believes the track can still stage "two days to savour", although it must first pass a 3pm inspection on Friday.

He said: "I'd be optimistic if the forecast is correct. We should see the back of the rain by the end of this afternoon, and then not expect any more than a few showers on Friday.

"We will do whatever we need to do to ensure that we give Saturday and Sunday the best chances of going ahead, and if we have to make some adjustments that's what we'll do."

The Met Office broadly concurred with Claisse's assessment. A spokesperson said: "Over the next 48 hours it won’t be as horrible but it will be cold. The rain pushes away to the north east on Friday and it will be mostly dry during the day. Although there is always the chance of a light shower they’ll be spits in the wind really.

"There will be some showery rain on Friday night into Saturday morning, most likely between 5mm and 8mm, but then it should brighten up and there may be some sunshine. However, the cold will be emphasised by a north easterly wind."

Claisse added: "We reckon that 30mm of rain in 24 hours is the maximum we can take and we were expecting a maximum of 25mm, but depending on whereabouts you are on the track we have been hit by between 37mm and 42mm, or some 37,000 gallons per furlong of the course. However you look at it, it's a lot of water."

The news that two of Friday's races have been rescheduled over the weekend, both with their original prize funds, offers some comfort to connections of those involved, and it's great news for racegoers.

The Ballymore Novices’ Hurdle will be run on Saturday at 12.05 as the first event on an eight-race card. The Glenfarclas Cross Country Handicap Chase will be run on Sunday at 1.15 and will be shown live on ITV Racing, which will be starting its broadcast on ITV4 early to include coverage. As a consequence, the conditional jockeys' handicap hurdle has been brought forward to start proceedings at 12.45. 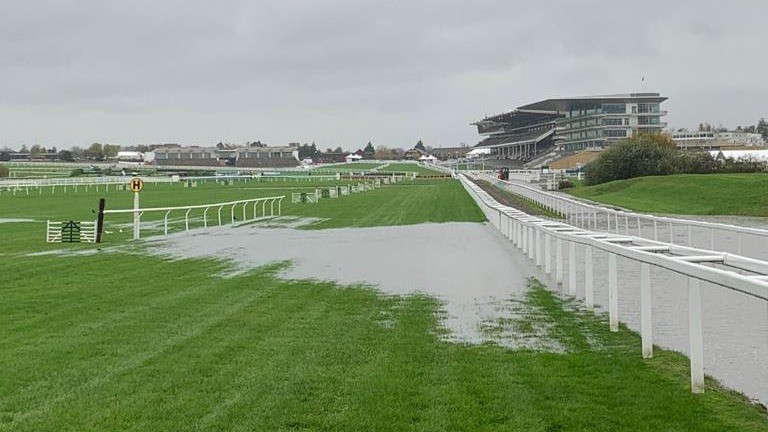 Standing water on the track at Cheltenham

Claisse said: "If we go ahead there's no question we can look forward to two cards to savour. They were excellent cards anyway, with the BetVictor Gold Cup attracting a maximum field, but they are even stronger now with the additional races and I must thank the BHA, the sponsors, ITV and everyone else involved for facilitating the transfer so quickly."

Outlining where the worst hit areas are, Claisse said: "The worst of it is through the middle of the track, which is the bit that sits lowest. If you think in terms of the second-last hurdle and the chase course opposite it, and of the landing side of the second fence of a two-mile chase or the first hurdle in a two-mile hurdle. That's all under water, and we have a service road down to the two-mile start which is under about three foot of it.

"That will all subside by the morning, but while we can race through standing water, as we did last month, it can become unstable in places a day afterwards when it's soaked into the ground, so that's what we need to make an assessment of before any decisions can be made."

Trainers to keep on side for Cheltenham's November meeting

Clued up: why the November meeting is the best guide for the Cheltenham Festival

The last time Cheltenham was hit by comparable rainfall was one summer, when Gloucestershire's lowest lying areas were flooded.

Claisse recalled: "Back in July 2007 Gloucestershire was hit by five inches of rain overnight and we were without mains water for three weeks. I've not seen more water on the track since then, and it's the first time since I've been here that we've lost a day of the November meeting."

Friday's abandonment came around two hours before the scheduled inspection at 3pm and it was not long before confirmation arrived of the rescheduling of two key races. 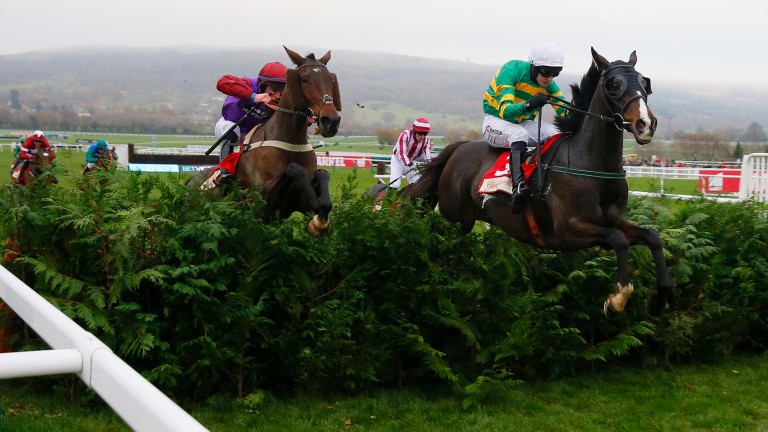 Paul Johnson, head of racing for the BHA, said: "It’s obviously very disappointing to lose a day’s action from Cheltenham, but we are pleased to be able to save these two important races.

"We are grateful to the racecourse, sponsors and everyone involved, in particular the Horserace Betting Levy Board, and ITV for allowing their Sunday broadcast to start earlier and take in the Glenfarclas Cross Country Chase as a result."

Initial entries stand for both races, but trainers must re-declare at 10am on Friday.

Those with pre-purchased tickets and car parking will be refunded, while the Tattersalls Cheltenham November Sale will now take place in the Tattersalls Sales arena at 1pm on Friday.

Anyone who is committed to being in the area and is at a loose end will be made welcome at Swindon greyhound stadium, which offers free entry for a 12-race card that starts at 11.11am.

The last time Cheltenham was cancelled due to waterlogging was on New Year's Day in 2013. Then, as on this occasion, an inspection was due to be held at 3pm on the previous day, but the abandonment was announced much earlier in the day. The difference on that occasion was that it was a one-day meeting.

New Year's Day in 2013 was a particularly significant date in the racing world, as it was the first time the new-look Channel 4 team headed by Clare Balding was due to broadcast from the track.

Instead the team decamped to Nicky Henderson's Seven Barrows stables, from where a two-and-a-half hour show took in racing from Musselburgh instead.

FIRST PUBLISHED 1:12PM, NOV 14 2019
I've not seen more water on the track since July 2007, and it's the first time since I've been here that we've lost a day of the November meeting