Latest WILL TO WIN

James Doyle: Crystal Ocean was classy, tenacious and a joy to be a part of 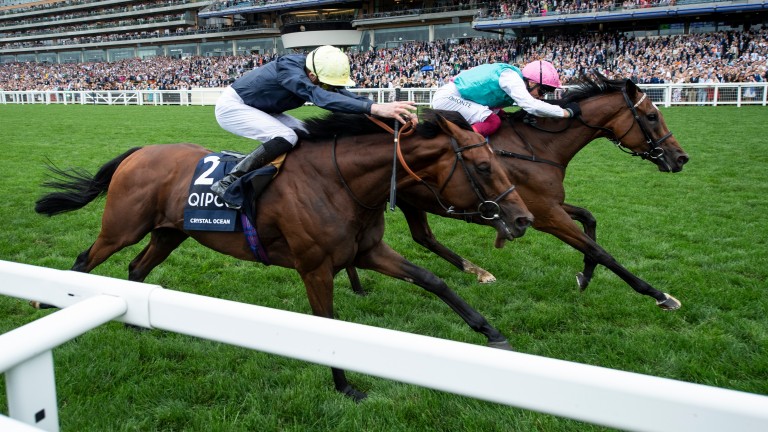 James Doyle on Friday hailed Crystal Ocean as a competitor whose class and talent was only bettered by his sheer determination to try his very best in races.

Crystal Ocean's racing career ended on Thursday after he sustained an injury on the gallops in Newmarket, although the five-year-old was saved for stud following surgery to insert screws into a hind leg.

That injury means Doyle will not get a third chance to ride Crystal Ocean, with the duo finishing second in the Juddmonte International and the King George VI & Queen Elizabeth Stakes when they narrowly failed to defeat Enable in one of the sport’s great head-to-head battles.

"It was devastating news to hear but the plus point is that it's fantastic he can hopefully go on to enjoy a fruitful career at stud," Doyle said.

"He was an absolute gentleman to have anything to do with. He looked after you every step of the way when you were riding him and he was a jockey’s dream to ride.

"He was very straightforward and a push button ride – anyone could ride him really. His tenacity and determination was like no other in a finish as we saw in the Juddmonte International and the King George."

Doyle had encountered Crystal Ocean’s determined streak when defeating him in last year’s King George at Ascot, but it was the first-hand experience the jockey had when riding in the same race in July that provided greater appreciation of the horse’s desire to succeed.

Crystal Ocean: James Doyle enjoyed some fine days in the saddle on the five-year-old
Martin Lynch
He said: "It was really exciting to pick the ride up on him in the King George and we knew the task we had ahead of us with Enable, but we would give it all we could.

"We felt it would be a very difficult task to try and beat her, but we weighed up the best options to give her a run for her money and we certainly did that and he really gave his all that day. You could just see by his head carriage that he wanted it as much as anyone and that he really wouldn’t give up."

Crystal Ocean finished in the first three on each of his 17 starts, winning eight of them, and Doyle was keen to highlight the horse's ability as well as his toughness.

"Any horse who finishes in the frame in every start in their career is unbelievable and he had that record," he said. "His form figures are unreal and he really did have a tremendous amount of talent. I loved riding him."

FIRST PUBLISHED 2:56PM, SEP 13 2019
He was an absolute gentleman to have anything to do with. He looked after you every step of the way when you were riding him