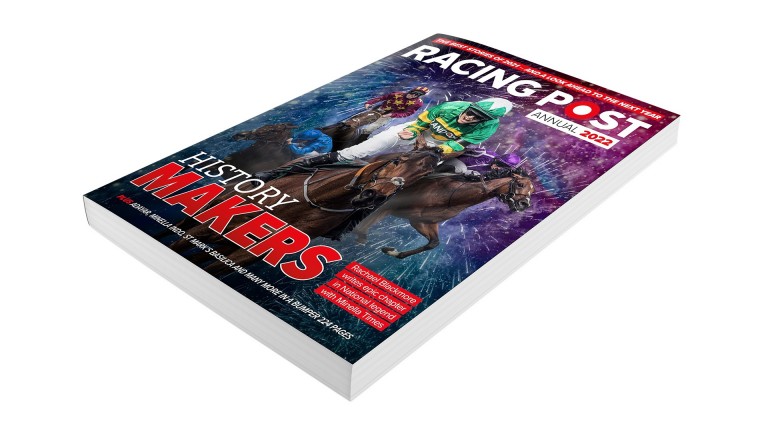 It takes something special for racing to be taken from back pages on to the front, but that is what happened in April as Rachael Blackmore's landmark Grand National victory was lauded by media outlets across the globe.

In becoming the first female jockey to win the world's most famous race, Blackmore's achievement transcended racing to become one of the great sporting stories of modern times, so it comes as no surprise to see her striking a celebratory pose atop Minella Times on the front cover of the latest Racing Post Annual.

This is the 11th edition of the comprehensive end-of-year highlights reel, containing in-depth articles by racing's finest writers and perfectly illustrated by the likes of award-winning photographers Edward Whitaker and Patrick McCann.

There's really only one place to start, and Richard Forristal sets the tone by reflecting on Blackmore's unforgettable spring when she went from the Cheltenham Festival's leading jockey to the most historic of Grand National winners.

Forristal writes: "By the time Aintree rolled around in April, Rachael Blackmore had already conquered the world once. For jump racing's most luminescent star, however, the world was not enough."

Similar sentiments apply to Henry de Bromhead, who also rewrote the history books during a magical few weeks. The County Waterford trainer is the common theme throughout the start of the annual, as following the opening article on his stable jockey Blackmore and National hero Minella Times, the focus switches to his Cheltenham holy trinity – Honeysuckle, Put The Kettle On and Minella Indo – before a delve into the man behind the miracle.

David Jennings begins that with the words: "Our annus horribilis was Henry de Bromhead's annus mirabilis. The year we want to forget is the one he wants to remember. As lockdown lingered he was looting every big prize going." 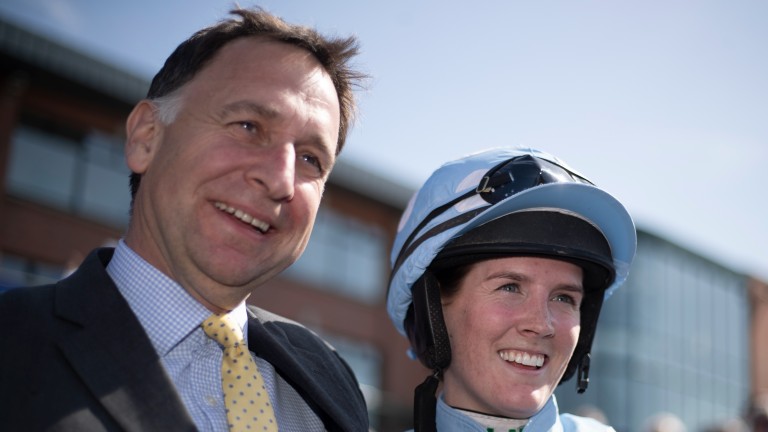 Any racing year can be succinctly split into two parts – Flat and jumps – but for 2021 you can also read crowds and no crowds.

The jumps action in the first half of the year was played out predominantly in front of empty stands, with eerie scenes at the Cheltenham Festival and Aintree's Grand National meeting.

In his introduction to the annual, editor Nick Pulford notes the importance of racing's heart and soul returning in the summer when he says: "Of course, this was also the year crowds were allowed back on racecourses in ever-increasing numbers to enjoy at least some of these delights. Whether or not you were lucky enough to be there when Stradivarius won at York or St Mark's Basilica triumphed at Leopardstown, we hope the annual will bring those stories to life and rekindle happy memories."

There are lots of other high points to remember and they are eloquently revisited and extended upon in the chunky 224-page blockbuster. Some of the equine stars to rejoice in include Godolphin's Classic heroes Adayar and Hurricane Lane, the Gosden stable's money-spinning pair Mishriff and Palace Pier, the remarkably tough Poetic Flare and emerging force Baaeed.

Away from the powerhouse operations, the Group 1 breakthrough of Lady Bowthorpe, owned by music agent Emma Banks, had all the narrative of a film script with jockey Kieran Shoemark's tale of redemption and trainer William Jarvis's return to the big time.

Towards the end of the book, eight pages are reserved for the horses and people likely to be making headlines in 2022. What chance we'll see some of them on the front of next year's Racing Post Annual?

FIRST PUBLISHED 6:00PM, DEC 4 2021
Any racing year can be succinctly split into two parts – Flat and jumps – but for 2021 you can also read crowds and no crowds

'Hard to see Kempton winner Mister Fisher threatening Allaho in Ryanair' From Kempton to Warwick, the big-race front-runners just kept on keeping on 'This was something to enjoy in our retirement - we're spending the pension!' Peter Scudamore: 'I'd have loved to continue riding but we weren't earning' Henry Daly: 'It was a nightmare - if you got yourself worked up you'd go nuts' Getting an edge at Meydan: your complete guide to the Dubai World Cup Carnival
Bookmaker
Price
E.W. Terms
bet365
Open Account
Ladbrokes
Open Account
William Hill
Open Account
Coral
Open Account
Paddy Power
Open Account
Betfair
Open Account
Sky Bet
Open Account
Sporting
BetVictor
Boylesport
888sport