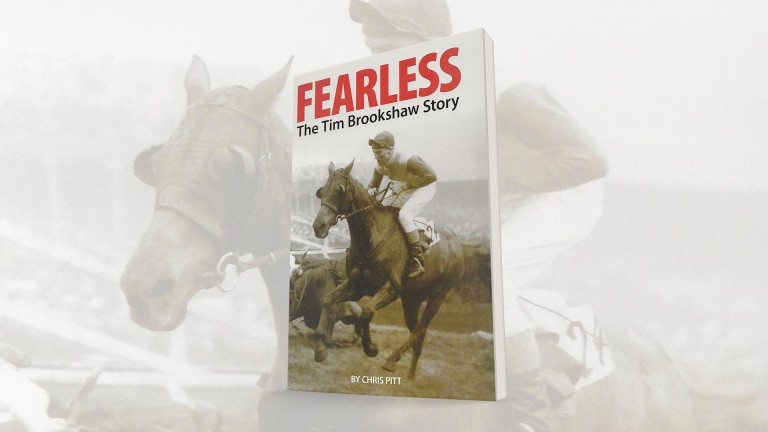 Fearless: The Tim Brookshaw Story by Chris Pitt is available to buy from the Injured Jockeys Fund for £14.95

Tim Brookshaw was a champion jump jockey who broke his back in a race-riding fall in 1963 and, through sheer willpower, defied paralysis to walk and even ride again.

This bravest and toughest of jockeys had ridden a finish without stirrups when a close second in the Grand National, and Chris Pitt's painfully honest biography does full justice to his inspirational story.

From a prosperous Shropshire farming family, Brookshaw rode in point-to-points, turned professional in 1950 and became champion jump jockey in 1958-59 with 83 wins, beating Fred Winter by nine.

His winning rides during his championship season did not include the performance for which he is best remembered – his epic ride on Grand National runner-up Wyndburgh.

One of his irons broke at the second Becher's, so he kicked out his other foot and rode without stirrups for the rest of the race, being beaten only a length and a half by Oxo and Michael Scudamore. The next morning he commented merely that he felt "a bit stiff".

He was a horseman more than a jockey, with a style that was unpolished by modern standards but obviously effective.

He didn't need the money because dairy farming was his main occupation even when he was champion jockey. He would milk his 50 cows in the morning, go racing in the afternoon if it was scheduled, and then return to do various jobs on his farm near Market Drayton.

His career was long on quantity of winners but short on quality. He scored just a single Cheltenham Festival victory and had only one ride on his sole top-class mount, Mill House, winning a handicap chase on him at Cheltenham in April 1962.

Brookshaw was paralysed from the waist down at Aintree in December 1963 when his mount crashed through the wing of a hurdle. His fall, and that of Paddy Farrell in the Grand National three months later, led to the creation of the Injured Jockeys Fund.

In those days paraplegics were routinely told they would never walk again, but with abnormal determination – "I'll bloody show them" – he was back on a horse within eight months, won a silver medal in the javelin at the Tokyo Paralympics the following October, was walking with the aid of two sticks and a calliper within 18 months, and resumed hunting.

Fearless makes the private lives of his family read like a soap opera, with infidelities, vendettas, divorces, alcoholism and suicide.

The Tim Brookshaw depicted here was not a nice man. Difficult to live with, he had a long-running feud with his brother Peter, who owned an adjacent farm and was himself a Cheltenham Festival-winning rider and father of Grand National-winning trainer Steve (Lord Gyllene).

Brookshaw was aggressive and, even after his accident, could still fight effectively if he got his opponent on the floor. He once knocked his brother unconscious, dragged him outside and left him on the side of the road. He even fell out with his son and daughter.

His truculent nature probably aided his partial success in overcoming his semi-paralysis. The muscles in his legs were of very limited use and he would climb stairs by pulling himself up on his knees, refusing all offers of help.

He trained under permit from 1966, schooling his horses himself, and later set up as a public trainer, although poor business skills limited his success in that sphere.

He was able to take part in a charity race at Navan in 1977 but died in 1981, six days after breaking his neck in a fall from a horse he was about to exercise. He was 52.

Chris Pitt takes the authorial warts-and-all approach to extremes, but his portrayal of flawed iron man Brookshaw makes this a refreshing change from most jockeys' biographies.

'I could have been dead quite easily - but I recovered and I'm back again' 'Some days I say I'm going to pack up - but training horses gives me a purpose' 'There's some screaming behind me' - what it's like to win the Galway Hurdle Neil Callan: 'I moved my family to Hong Kong - now it's my turn to respect them' 'I love owning horses - but not being able to get a bet on might drive me away' Canford Cliffs: 'He was one of the best racehorses in the last 50 years'
Bookmaker
Price
E.W. Terms
bet365
Open Account
Ladbrokes
Open Account
William Hill
Open Account
Coral
Open Account
Paddy Power
Open Account
Betfair
Open Account
Sky Bet
Open Account
Sporting
BetVictor
Boylesport
888sport