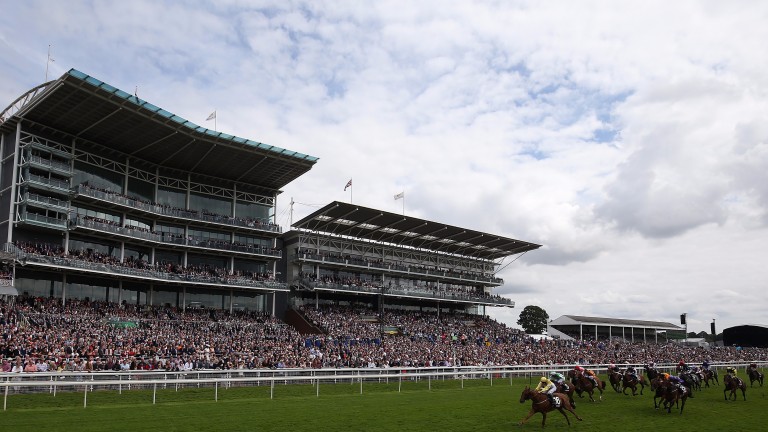 1 The Betfred Ebor, the centrepiece race at York on Saturday, is Europe’s richest handicap on the Flat. The race is often seen as a precursor to the Melbourne Cup and is York’s oldest and most famous race. Last season it was won by Heartbreak City and sparked memorable scenes in the winner’s enclosure. This year’s race has total prize-money of £285,000, with £177,413 going to the winner.

2 The Ebor name derives from the Roman word Eboracum. The moniker was given to the city by the Romans who set up camp around AD 71. When the Ebor Handicap took place at Newbury due to waterlogging in 2008, the race was renamed the Newburgh Handicap, after the town’s original Norman name.

3 The Group 1 Juddmonte International Stakes is Britain’s highest-rated Flat race, based on three-year official average ratings. Having been won by horses such as Frankel, Sea The Stars, Giant’s Causeway and in 2016 Postponed, it is easy to see why. It is held on the opening day of the festival.

4 During the four-day meeting you will often hear the track being called the Knavesmire, the name given to the large, marshy area on which it is built. The Knavesmire is part of Micklegate Stray, one of the four Strays of York – areas of open land covering more than 800 acres within the City of York. It is joined by Bootham Stray, Monk Stray and Walmgate Stray. The Knavesmire, which is vulnerable to flooding, boasts the racecourse, a school and a number of sports clubs. It was once the venue for the York gallows, used for public executions.

5 The Ebor Handicap was first run in 1843 and was won by Pagan at 6-1 under Slim Templeman. The owner was Colonel Craddock, who won £200 in prize-money. There has been one dead-heat in the race in 1930, when Coaster and Gentlemen’s Relish were unable to be separated.

6 Racing went into a decline in the first half of the 19th century at York, and Doncaster became more popular. In 1842 the York Racecourse Committee was created to reverse this decline and a year later the Ebor meeting began and has been staged ever since.

7 The ladies take centre stage on and off the track on Thursday. On the track the Yorkshire Oaks is the feature race. It was first run in 1849, but only opened to fillies and mares older than three in 1991. Enable will be going for her fourth Oaks of the season, having won the Cheshire Oaks, Epsom Oaks and the Irish Oaks. Off the track, the best-dressed award is fiercely competitive.

8 The Nunthorpe Stakes is named after the Nunthorpe area in York and when first run in 1903 was a mere low-grade selling race. This changed in 1922, when the revamped version was won by Two Step. This year's renewal sees a tantalising clash between Wesley Ward’s Lady Aurelia and Charlie Hills’s Battaash.

9 The Gimcrack Stakes is named after one of the early great horses. Gimcrack was a tiny grey, only 14.2 hands, and won 27 of his 36 races. He was defeated on his two runs at York but was admired widely, especially in York, where Ye Anciente Fraternite of York Gimcracks was founded in 1770, now commonly known as the Gimcrack Club. A George Stubbs painting of Gimcrack sold for £22.4 million at auction in 2011 and was in the top five most expensive master paintings in the world.

Here's to you Doc, a great and dynamic broadcaster York chief hopeful of bigger crowds despite likely delay to 'Freedom Day' 'He's very much on the up' - progressive sprinters clash on the Knavesmire Less is more: top bookmakers 'disheartened' by return of overcrowded Saturdays