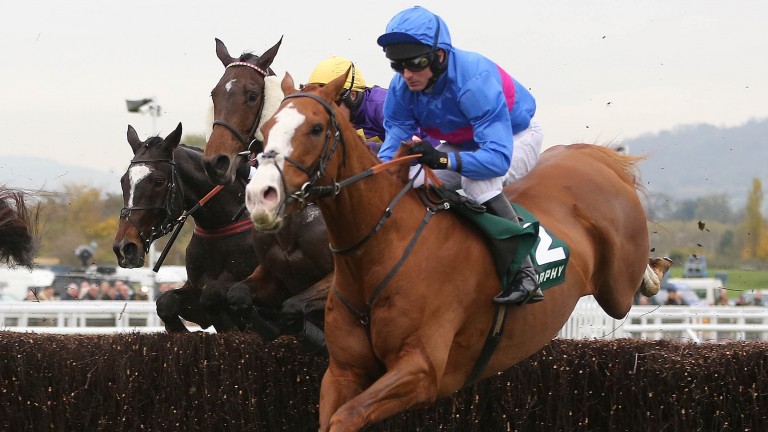 Alvarado: retired on his 14th birthday after running at Cheltenham
GROSSICK RACING
1 of 1
By Richard Birch UPDATED 5:59PM, JAN 2 2019

Fergal O’Brien on Wednesday paid a glowing tribute to Alvarado, his 14-year-old who twice finished placed in the Grand National at Aintree, following the decision to retire him.

"He was the most wonderful horse," O'Brien said. "I was lucky enough that his owners Mr and Mrs Rucker sent him to me during my second season of training.

"He trained himself and was a joy to have around. Paul Moloney got on so well with him, and together they finished fourth in two Nationals and runner-up in the Scottish National.

"He was a bit of an Aintree legend after finishing fourth to Pineau De Re in 2014 and then fourth behind Many Clouds the following year. He won £230,000 in prize-money during his career."

The decision to retire Alvarado, affectionately known as 'Alvin' at O'Brien's yard, was made after he finished sixth of nine behind Beware The Bear at Cheltenham on New Year's Day, officially his 14th birthday.

He won eight of his 36 starts, including a Grade 3 handicap chase at Cheltenham in 2013 under Moloney, beating Knockara Beau by two lengths.

In addition to finishing second to Vicente in the Scottish National at Ayr in 2016, Alvarado finished fourth in the race a year later – again behind Vicente – this time with Brian Hughes aboard.

FIRST PUBLISHED 1:10PM, JAN 2 2019
He was a joy to have around. Paul Moloney got on so well with him, and together they finished fourth in two Nationals