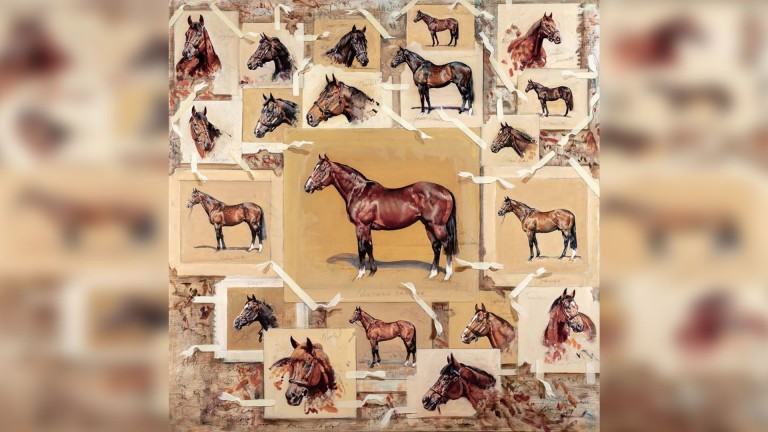 The painting shows the influential sire alongside 19 of his famous descendants, including Galileo, Nijinsky, Nureyev and Frankel, whom O'Sullivan describes as extraordinary and influential.

The celebration of racing history will be shown at Osborne Studio Gallery from November 6-28 in an exhibition entitled Illuminations, which also includes oil paintings of Enable and Frankie Dettori.

O'Sullivan has produced work for the Duke of Edinburgh, Lord and Lady Lloyd-Webber, and the Earl and Countess of Derby. This will be her seventh solo exhibition at the gallery. She was described by Sir Peter O'Sullevan as being "quite simply one of the most original and beguiling interpreters of the power and grace of the horse in the history of equine art".

Royalty and racing at Newmarket

A temporary exhibition exploring King George IV's lifelong relationship with horseracing and Newmarket will be shown in The Moller Gallery at Palace House from November 28.

King George IV: Royalty, Racing and Reputation sheds light on the monarch's legacy as not only a great collector of art but as a prominent and often controversial patron of the sport.

All but one of the 42 featured works of art, including portraiture and comical etchings, are lent from the Royal Collection and provide fresh insights into the life of a man who defined an era.

The objects on display at Palace House connect Newmarket with George IV in many ways: by showing the company he kept, the lives he and his contemporaries led, and the animals they cherished.

The king was undeniably a controversial figure and was famously caught up in a scandal involving his horse Escape in October 1790 when his jockey Sam Chifney was accused of holding his mount back in a bid to win a substantial purse the following day, which he did.

The exhibition includes a satirical etching of this episode by artist Thomas Rowlandson, showing Escape with his legs bound by the motto of the Order of the Garter and George IV imploring secrecy.

FIRST PUBLISHED 6:00PM, NOV 2 2019
This celebration of racing history will be shown at Osborne Studio Gallery from November 6