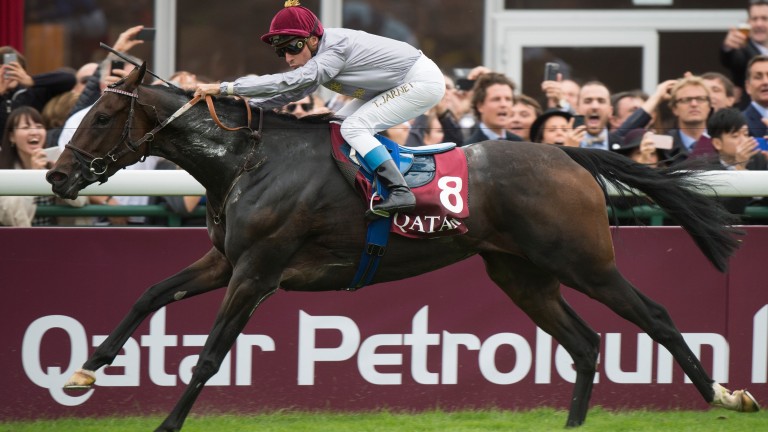 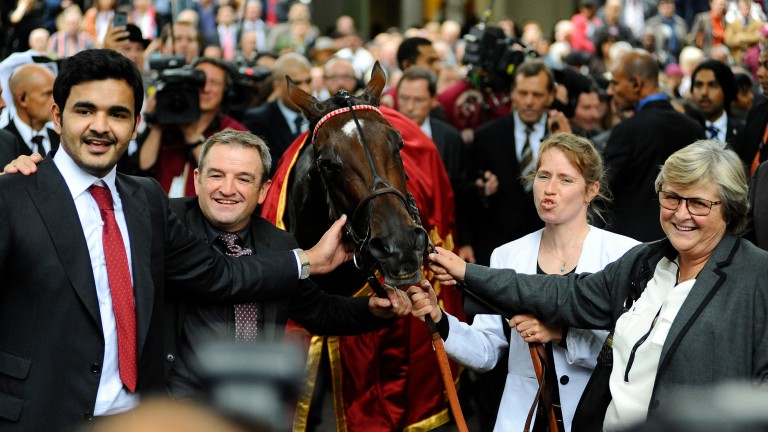 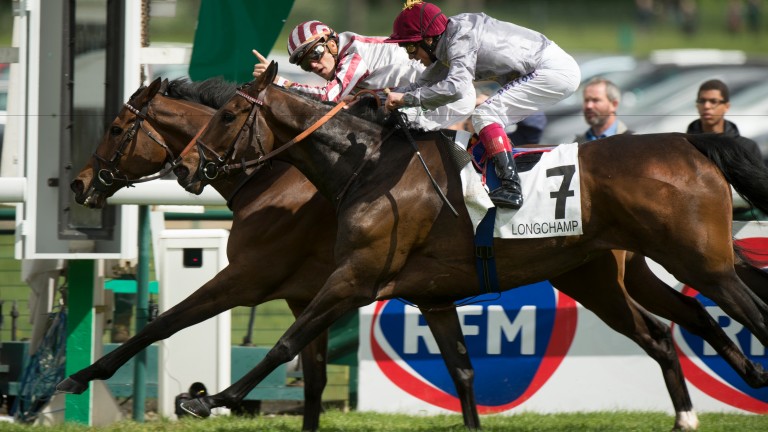 Treve and Thierry Jarnet streak to an historic second Arc success
Edward Whitaker
1 of 3
By Lewis Porteous 10:38AM, JAN 23 2017

Not all champions are flawless in design. Some come with imperfections, mental and physical, and only in the right hands do they reach reach their true potential.

In the last 39 years, Treve is the only horse – male or female – to win back-to-back Arcs, yet the way she went about her business was far from conventional.

Considering she was a daughter of quirky Derby winner Motivator, himself a son of the mercurial but supreme Montjeu, perhaps it is unsurprising Treve was not an image of perfection.

Often awash with sweat on the big days, she was a free-traveller who pulled like a mine train with no breaks, her head hanging awkwardly high in the process. Yet beyond those quirks lay an engine fit for the Rolls-Royce production line. All it needed was to be handled with care.

Treve was an undoubted triumph for the Head family. Bred by Alec Head at the family’s Haras du Quesnay in Deauville and trained by his daughter Criquette Head-Maarek, Treve had just the one run at two, winning over a mile at Longchamp before retiring for the winter.

Her Classic season started with a low-key success at Saint-Cloud, but hopes of running in the Group 1 Prix de Diane were damaged when she returned a sick horse. Time was against her but with the Diane fast approaching, Treve started to come right and Head-Maarek made the bold decision to run.

“Papa thought it was too much,” she says. “There was a stakes race two weeks before but it was too close so I decided to go straight to the Diane.”

The lack of match practice proved inconsequential as on her first start beyond a mile, Treve burst through to lead well over a furlong out to register an impressive victory on just her third career start and first at Group level.

The Prix de l’Opera would surely have been Treve’s for the taking after such an impressive performance, but with Al Shaqab Racing now on board bolder plans were hatched with Europe’s greatest open-age middle-distance race, the Prix de l’Arc de Triomphe, emerging as the preferred end-of-season target.

The decision to stump up the €100,000 supplementary fee was an easy one after she easily landed the Vermeille under Al Shaqab’s retained rider Frankie Dettori for the first time.

Preparing for his 26th consecutive appearance in the Arc, Dettori was cruelly ruled out after a tumble on his way to post for a 0-75 handicap at Nottingham four days before left him with a broken bone in his foot.

Regular rider Thierry Jarnet was reunited with Treve and, in what was widely billed as a strong Arc, she was sent off 9-2 second favourite behind the previous year’s unlucky runner-up Orfevre.

What those present on that crisp autumn afternoon at Longchamp witnessed was not just one of the greatest performances in the race’s history but one of the best middle-distance performances of the modern day.

Considering she sweated up, was trapped wide from stall 15 and failed to settle, it is still hard to fathom how she passed the post five lengths clear of runner-up Orfevre, one the best horses to come out of Japan.

"I thought she had six gears, but she put seven gears on,” says Head-Maarek. “She was never covered up and had to come on the outside but when a horse is that good it makes no difference.”

If that performance still takes some believing, the fact she turned up on Arc day the following year having suffered three straight defeats is even more dumbfounding.

Dettori, having ridden Treve just days before her reappearance in the Prix Ganay, felt she was “unbeatable” according to her trainer, such was her wellbeing at the start of her third season. But in granite-tough veteran Cirrus Des Aigles she met a formidable opponent with race-fitness on his side, and with gritted teeth he inflicted a first defeat on Treve in a humdinger.

Back and foot problems were blamed for two further defeats at Royal Ascot and in the Prix Vermielle, by which time Dettori had been relegated to the subs bench for Jarnet.

"A lot of people said she was gone, she was no good but I asked Sheikh Joaan just to have faith in me,” recalls Head-Maarek.

Rated an 11-1 shot this time in a typically strong Arc line-up, Treve was her usual edgy self in the preliminaries. Awash with sweat by the time she reached the start, she was also back to her old self in the race.

As had been the case 12 months earlier, she took a strong grip but on this occasion enjoyed a much kinder trip around the inside, and when a gap appeared with less than two furlongs to run Jarnet unleashed her trademark turn of foot, sending her clear and into the record books as only the seventh dual winner of the Arc and the first to complete the double since Alleged in 1977 and 1978.

Head-Maarek, winning her third Arc, described the victory as the best of her career and, in a blaze of glory, Treve was retired. Or so we thought.

A conversation with Alec Head when Sheikh Joaan visited his retired champion the day after the Arc appears to have been the catalyst for a dramatic U-turn and six days later came the announcement that retirement was on hold and a quest for racing immortality and an unprecedented third win in the Arc was on.

Free form any ailments, her build-up was smooth this time, Treve winning without fuss on three runs before her date with destiny.

This time it was Jarnet who felt Treve was “unbeatable”, which according to her trainer was the reason he was happy to take up a position out wide, similar to their first success.

On this occasion, however, the history-maker was Golden Horn, with Treve running below her very best. She still finished a close fourth, making strong headway up the home straight, but was unable to claw back the Derby winner.

In truth, beaten just over two lengths by an exceptional champion, with Flintshire and New Bay also in front, meant she lost little in defeat on her final start, with Treve retiring as the winner of nine of her 13 races and more than £6 million in prize-money in the bank.

“For me she was exceptional,” says her trainer. “It is difficult to find a word to describe what she has done and what she means to everyone. Elle est fantastique.”

Vroum Vroum Mag
If this poll were based on versatility, she would surely be fighting it out for top spot. Hurdles or fences, two miles or three, heavy or hard ground, Ireland or Britain – nothing seems to faze her. She has won 11 of her 12 starts since joining Willie Mullins, her sole defeat arrived in the Hatton's Grace Hurdle at Fairyhouse when Apple's Jade won on the bob. She could run in six races at the Cheltenham Festival and would not look out of place in any of them. She is a hotshot hurdler right now, but next season she could be a cracking chaser. The 2018 Gold Cup? Why not. There is nothing this mare cannot do. Following her has been fascinating.
FIRST PUBLISHED 6:00PM, JAN 22 2017
It is difficult to find a word to describe what she has done and what she means to everyone. Elle est fantastique