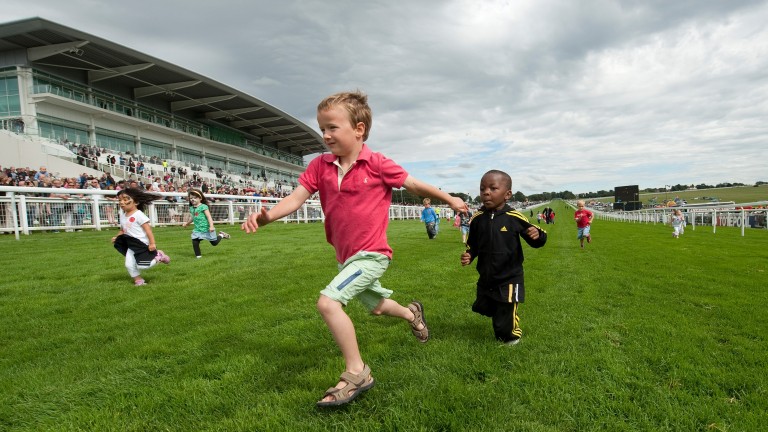 In Scotland the skool holidays have already started, so #StirrUpSummer, the new initiative from Great British Racing, might not make up the ground. Under-18s have been out sniffing glue and smashing up phone boxes for more than a week now and the prospect of a free day at the races might pass them by. Plus it's doubtful if Musselburgh will be on the itinerary and it's raining anyway.

Still, the rest of the UK's learners aren't roughed off yet so there's time for preparatory work. #StirrUpSummer, which might not help with spelling issues, is billed as GBR's "biggest ever national campaign" to encourage families to bring kids free, an attraction of the sport not everyone knows about. Unaccompanied youngsters can take advantage by using the time-tested off-sales ploy of hanging around outside for a helpful adult (not official advice).

Anyway, #StirrUpSummer, which is becoming a chore to type, is a good effort. It's got a bright design and lots of action, it gets sharply to its points, there's not too much to read and it's entertaining.

As the enlightening interview this week with student Adam Powers demonstrated, it's hard enough to get a 20-year-old locked in. "What is a furlong?" Powers asked, not unreasonably, so kudos to GBR for trying to engage with the underage.

On with the product. Budding racegoers can easily find the meetings closest to them, a function that, unlike many similar, works. YouTube vlogger and human energy drink Caspar Lee (awesome) adds focus to his vacuous, pranking lifestyle (awesome) by designing trainers for a horse (awesome).

You (not you, a child) can use a template to have a crack at your own version and win a family VIP day at the track. There are already quite a few in the gallery, where the 'Hoof It!' pair by Lois (13) is clear leader.

You (not you, a child) can find out your hip hop horse name. Mine is DJ Hack, which couldn't be more appropriate, although I'm not going to tweet it. Yesterday it was something else, so there could be hours of fun here. Also on the fun front, there's a Super Mario-style racing game. Lots of jumping.

Then there's some serious stuff about what to do at the races (watch them, mainly, which has got to be more fun than being traumatised by Little Mix admirers). The guide to top jocks registers 20 per cent females, which outstrips a lot of racing media. Very welcome is the rerun of the Kids vs Jockeys interviews, which should not be missed.

To add parent appeal, DJ Sara Cox has been enlisted. Cox used to be a bit of a youth but now she presents Sounds of the 80s on Radio 2. Whether that's prolonging youth, reliving it or giving up on it is moot but she has always been likeable enough. If I was in charge I'd try to get Lady Leshurr. There's someone who connects with under-18s online, not to mention urges them to brush their teeth. But, like with acts for racecourse concerts, slebs of a certain vintage are the more likely to endorse the sport of moribund monarchs.

Cox makes a breezy visit to Windsor for a tour of the facilities and you can't knock her apparent enthusiasm.

She takes time before racing to quiz and electrocute Jamie Spencer and Sean Levey, who know what a furlong is, and how many there are in a mile, but not whether a racehorse is faster than an ostrich. Ouch! Nice little gadget though, if you're into electrocution.

A good website is all very well, but everyone knows you'll best hit up the youth target on something like Instagram (as pointed out, by Alex Donohue, in that enlightening piece). #StirrUpSummer is on it, so what can I add? Twitter and YouTube if you're feeling a bit passé.

Teeny racegoers could be the owners of the future (they'd better be, or we're all screwed), when they will be able to give up vloggers, electrocution and hip hop names to join the ROA.

At the other end of whatever scale we're working on here – and it's a long and winding scale – the ROA livestreamed its AGM on Tuesday. No one got electrocuted and there was a lack of hip hop names. Not even MC Hammer. He might turn up on Cox's show.

It's easy to be flippant about things like the ROA AGM, but at least they bothered. There must be people who want to watch it and they did the event proud, or as proud as you can when most of the captions are about board elections and ordinary resolutions.

The ROA livetweeted it too, and compiled a highlights video with music (not hip hop), although that seems to have disappeared from the site now. It was hard to pay attention to all of it while you were trying to work, but I did hear someone say "the experience must be first class, with a proper lunch", which seems sound enough. Grassroots prize-money, ownership administration infrastructure, Brexit, Musselburgh and drunken behaviour at racecourses were all addressed, and then there was a champagne reception.

It would have been nice if the stream had continued for Nick Luck's post-lunch speech. Still, as anyone who watches YouTube vloggers will know, there's truth in that cliché about having too much of a thing.

There is a lot of handwringing in racing but, from hip hop names to the commitment to proper catering, there is also a lot of well-intentioned effort to provide for its inheritors. As Steve Dennis observed this week, perhaps everyone is fretting a bit much. The sport might endure.