Sales correspondent James Thomas reports from day one in Doncaster 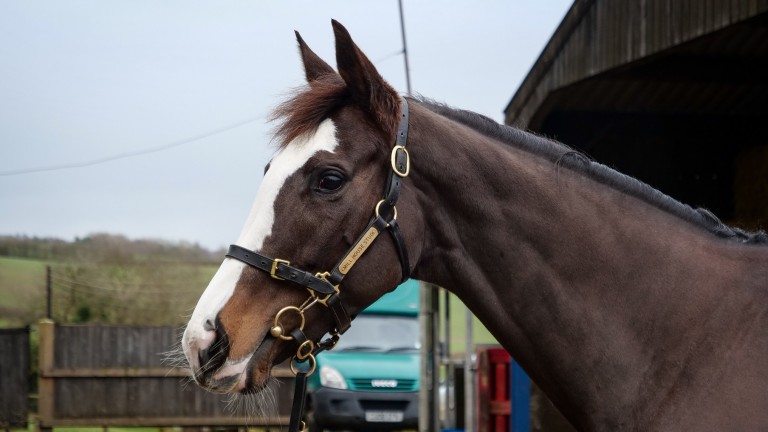 A clearance rate of 51 per cent told the story of selective trade on day one of the Goffs UK January Sale in Doncaster on Tuesday, where the session-topper fetched £150,000 but only 113 of 223 offered lots found a buyer.

The headline act was classy racemare The Glancing Queen, whose seven rules victories include a Grade 2 bumper and a brace of Listed events over fences for Alan King.

Offered by Mill House Stud to dissolve the partnership in whose colours the nine-year-old ran, the daughter of Jeremy joins the powerful broodmare band being assembled under the DahlBury banner by owner-breeder Simon Davies. 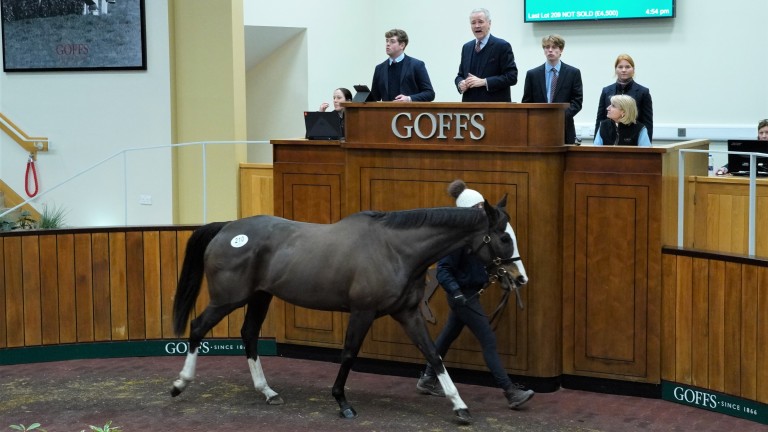 As well as standing Bangkok, Planteur and Walzertakt at Chapel Stud, Davies has put together a blue-chip herd of mares that already includes the likes of Champion Chase heroine Put The Kettle On and Quilita, dam of Triumph Hurdle winner Quilixios.

“She was the standout here today,” said Davies. “She walks really nicely and she adds to the quality that we’re already breeding from. Her pedigree is great, her form on the track is there, she’s top quality.

"I haven’t decided which stallion she’ll be covered by, but it definitely won’t be Planteur because the inbreeding is a little too close. I’ll speak to Roisin [Close, owner and manager of Chapel Stud] before making a decision.”

The Glancing Queen was making her third appearance at public auction, having previously cost Colin Bowe €8,500 as a store before she was resold to Highflyer Bloodstock and Alan King at £80,000 following victory in a Horse & Jockey mares' maiden point-to-point. 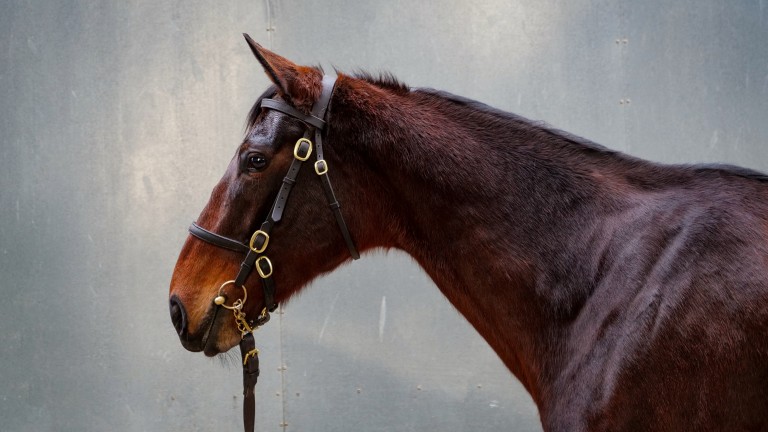 A tricky session of selling ended with a bit of a flurry as a few lots after the sole six-figure transaction Peter Molony of Rathmore Stud secured Cap Soleil on a bid of £75,000. The ten-year-old daughter of Kapgarde was offered in foal to Crystal Ocean and was sold by Throckmorton Court Stud on behalf of Sally Noott, breeder of Constitution Hill.

Cap Soleil won five times during her time in training with Fergal O’Brien, most notably the Listed Abram Mares' Hurdle at Haydock. She is a sibling to five winners, including the Listed winner Prince Picard.

“She’s been bought for a client and will come back to Ireland,” said Molony. “They sell foals so she’s been bought for a commercial operation. Hopefully she’ll have a nice foal that’ll be sold at Goffs next December. These people have been lucky with Crystal Ocean in the past and she was a very good racemare so I’m delighted to get her.”

Trade proved rather more patchy during the National Hunt weanling section of the catalogue, with those by the right sires fairing well but the market taking a more dim view of the progeny of the less fashionable stallions. Just 87 weanlings sold, 48 per cent of the 183 offered.

The leading light was the Walk In The Park half-brother to Dan Skelton’s high-class two-mile chaser Nube Negra, who drew a bid of £75,000 from Gerry Aherne. That price is the highest ever given for a National Hunt weanling at the January Sale.

“With a pedigree like that he’s hard to leave behind,” said Aherne, whose day job is as part of the Coolmore nominations team. “He’s a young foal but a really nice foal. He’ll be kept to race and we’ll see if we can turn him into a racehorse. Dan loves the brother. I spoke to Dan about him at length and he’s bought the sire, the mother, the sister, everything to do with Nube Negra.

“Walk In The Park is very good. We have a lot of young horses by him ourselves and we think he’s special. He’s going to cover plenty of mares this year, he’s getting the best mares around now. He’s not getting any younger so when you get horses like this foal they’re hard to leave behind because who knows how much longer they’ll be on the market.” 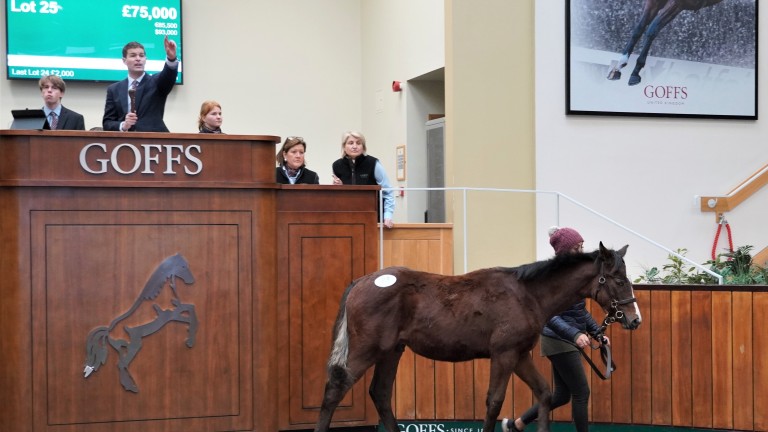 Aherne has been on something of a Walk In The Park buying spree in recent months, with Tuesday’s acquisition his sixth purchase by the Grange Stud resident. The sextet are headed by the colt out of dual Grade 1 winner Shattered Love who became the most expensive foal ever sold at the Goffs December National Hunt Sale when secured at €155,000.

“He’s a bit different to some of the other types we bought, he’s an earlier type, shorter and stronger so he could be a bumper type,” continued the buyer. “Wherever we can maximise his value, that’s where we’re going to go.”

Expanding on the ownership set up behind his recent purchases, Aherne said: “Some are for a syndicate I’ve set up to go racing, but when you buy a horse like him there’s no bother finding someone to pay for him. He’ll go back to Tipperary to be reared. I think we have some very special horses bought in the last couple of weeks so let’s hope there’s another Facile Vega or Min among them.” 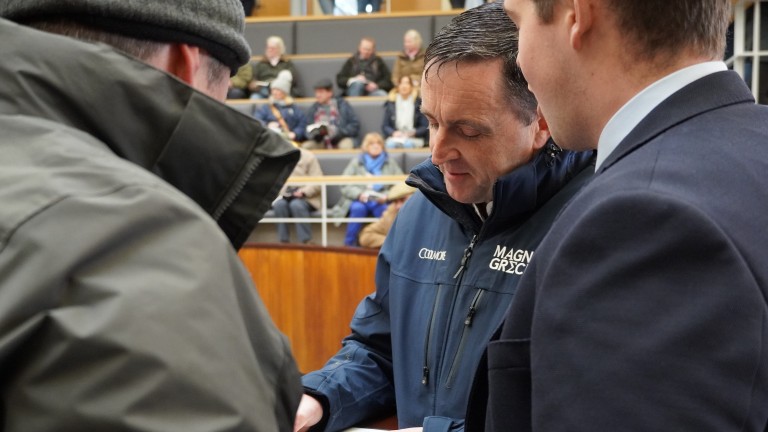 The colt was bred by Nick Skelton and offered by Alne Park Stud, which is run by Grace Skelton, wife of leading trainer Dan. The operation is home to three stallions in Dink, the son of Poliglote who sired the aforementioned Nube Negra, as well as Midnights Legacy and new recruit Ocovango, who spent eight seasons on the Coolmore roster at The Beeches Stud.

Explaining the backstory to the Walk In The Park colt, Grace Skelton said: “We bought the mare at the same time we brought Dink over. She came from the same place, so it was a bit of a job lot! She was in foal to Dink at the time so we also have the two-year-old full-brother to Nube Negra. He’s very flashy, a lovely type.

"This lad was her second foal born with us and I’ve liked him from day one. He’s always been a nice foal and even though he’s quite late, he’s already got plenty of quality. I’m delighted with that price. The mare is in foal to Blue Bresil.”

Alne Park’s trio were among the 19 horses taking part in the Thoroughbred Breeders’ Association's National Hunt Stallion Showcase, which was being held alongside the sale at the Doncaster complex.

Skelton said: “It’s still quite early days but their books are filling up and Ocovango is proving popular. I think we’ll take a few more bookings with them being out and about and visible to the breeding community, who are all here.”

Aherne was back in action later in the session when he outpointed Tom Malone and Jamie Railton at £52,000 for a Blue Bresil colt offered by Yorton Farm. On this occasion he signed the docket J&J Aisbitt/Prospect Stables.

The colt is out of Cedelor, a French-bred Full Of Gold half-sister to the Listed-winning and Grade 2-placed Vieux Morvan. Blue Bresil spent four seasons at Yorton, during which time he bred the brilliant Constitution Hill, before he switched to Glenview Stud in 2020.

“It's a great price and we were lucky to get it,” said Yorton’s David Futter. “It’s difficult today, it’s a select market. Although it’s easy to say when one has just made £52,000 but if you bring the right horse you’ll get rewarded.

"We’re fortunate that we kept a few shares in Blue Bresil as he’s very popular at the moment. The market is very sire-driven, but with Blue Bresil it’s probably warranted because he’s doing it on the track and only from very small numbers.”

Explaining the decision to bring the colt to Doncaster rather than save him for Yorton’s own upwardly mobile boutique sale, which takes place in September, Futter said: “It’s purely cash flow. It’s a massive business we’ve got going at Yorton now and we can’t sit for months without selling as we have a lot of bills to pay before September. We’ve just taken on a new 350-acre farm to help us develop the youngstock side of the business though, so it’s all going great.”

Another stallion whose progeny are in high demand with National Hunt buyers is Nathaniel, and the Newsells Park Stud resident duly supplied the third- and fourth-most expensive foals. The pricier of the pair was the colt bred by Goldford Stud out of the winning and Grade 2-placed Petticoat Tails, with Malone striking a bid of £50,000 on behalf of Abbeylands Farm.

“He’s been bought on behalf of Frannie Woods,” said Malone. “He said to have a look and to tell him which I liked, and I thought this colt was a star. The pedigree speaks for itself, I love pedigrees like that and it’s very rare they’ll let you down. I love Nathaniel too.

"Goldford have been selling good horses for a long time so he’s had the best prep so far. One day he might end up being a champion so it’s lovely to have started the ball rolling.”

Petticoat Tails is one of four winners out of the Grade 2-placed Theatre Girl, which makes her a sibling to the progressive Tweed Skirt, a Listed-placed daughter of Martaline who will bid to gain bold black type in the Pertemps Lady Protectress Mares' Chase at Huntingdon on Friday. In turn, Theatre Girl is out of Fortune's Girl, dam of the Grade 2 Aintree bumper scorer Diamond Sal and Listed-winning hurdler Ring The Boss. 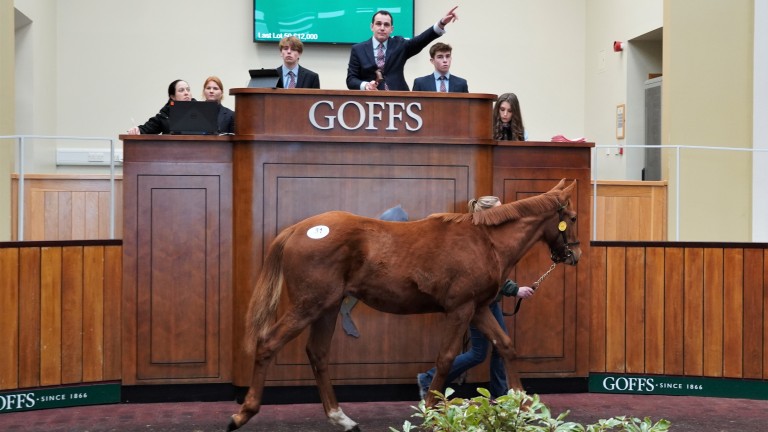 “I bought Fortune's Girl while walking through Dublin airport on the way back from the Derby Sale with Anthony Bromley,” said Goldford’s Richard Aston.

“I told him I’d buy a mare if he knew of one and he said, ‘Fortune's Girl, she could be for you’. I asked how much and he said 12 grand. I remembered her from her racing days as she ran for the Million In Mind syndicate. She had a lovely pedigree and was by Ardross. We’ve bred just about everything on the page.

“We bred and raced Petticoat Tails. She was talented and very tough. She’s at home and has two fillies, one three and one two. The three-year-old by Blue Bresil will come here in May and we’ll probably keep the Getaway two-year-old to keep the family going. We’re racing Tweed Skirt, and Petticoat Tails is back in foal to Nathaniel.”

When asked if he felt there was enough talent to tempt British jumps breeders to send their mares to home stallions rather than going to Ireland, Aston said: “If you’d asked me 12 months ago I might have said no. But I think having access to Nathaniel and now Golden Horn means we’re in a very privileged position.

“Simon Davies’s investment in British breeding is very admirable. Anybody who’s prepared to put their money where their mouth is in terms of British breeding deserves the greatest of admiration. And some luck. There’s David Futter too, and now Dan and Grace Skelton, there’s a lot more choice that's suddenly sprung up. As a British breeder, all I can say is that we’re very fortunate to have people who are prepared to invest.”

Earlier in the session Molony landed another of the Nathaniels on offer when going to £40,000 for the colt out of the Listed-placed Miss Ballantyne consigned by Little Lodge Farm.

“He’ll come back [to the sales] as a three-year-old,” said Molony. “He’s a lovely scopey horse, a great mover. Obviously he was bred by a wonderful breeder in Robert Chugg, who we all miss. I’ve been lucky buying from Chuggy in the past with horses like El Presente. The sire is something a bit special too so I’m delighted to get him.”

The other lot to break the £50,000 barrier was a three-year-old son of Doctor Dino knocked down to pinhooker Johnny Collins of Brown Island Stables at £58,000.

The gelding, who is out of a Medicean half-sister to the Group 2 Prix d’Harcourt winner Air Pilot, was offered as part of the complete dispersal of Mill Farm Stud.

The January Sale continues on Wednesday, with the second session starting at 10am.

FIRST PUBLISHED 7:22PM, JAN 24 2023
The market is very sire-driven, but with Blue Bresil it’s probably warranted because he’s doing it on the track