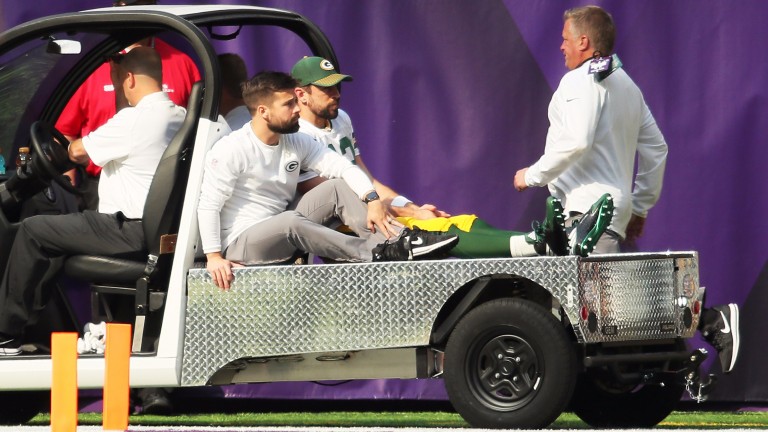 The season could be over for Green Bay quarterback Aaron Rodgers
Getty Images
1 of 1
By Ian Wilkerson 8:57AM, OCT 19 2017

The Chiefs lost their unbeaten record this week, but with few other top teams making much of an impression, their position at the top of the pile was not really threatened. The well-drilled outfit should be ready to go again.

The Patriots move up the chart but they were still given a tough test by the Jets, who were unlucky to have a touchdown ruled out that could have forced overtime. The Super Bowl winners are only just doing enough at the moment and need to push on.

The mood at Pittsburgh should be transformed by Sunday's win over the Chiefs after quarterback Ben Roethlisberger was left questioning whether he still had it after a dismal display against Jacksonville. They are still likely to be a force in the congested AFC.

Seattle move up despite having the week off as rivals had their limitations exposed. The progress the Rams have been making in the NFC West should ensure their focus is maintained and they should push on as just two of their next six opponents have winning records - Washington and Atlanta - and both have to visit CenturyLink Field.

The Falcons were 17 points up against Miami before allowing the Dolphins back into the game. They could have done with that victory being in the bag as New England, Carolina, Dallas and Seattle are among their next five opponents. They need to be back on the ball quickly.

The NFC North looks to be up for grabs now and the Vikings can push right into contention, even though their first choice quarterback, running back and wide receiver are all struggling with injury. The supporting cast have stepped up and they look to be in the division's box seat.

Defeat to the Vikings was a disaster with Aaron Rodgers breaking his collarbone. Quarterback injuries are woeful at the best of times but losing Rodgers is a catastrophe for the Packers. Their Super Bowl hopes could now be in tatters. There is no way they would be underdogs at home to the Saints if Rodgers was fit. Few fans will be looking forward to the rest of the season.

The Eagles are still grinding out victories and quarterback Carson Wentz continued to answer his critics with an excellent performance against the Panthers. A win on Monday night would tighten their grip on the NFC East and their first playoff appearance for four years looks a real possibility.

Others' progress sees the Cowboys slip and while Ezekiel Elliott looks set to play against the 49ers, his potential six-match suspension keeps rumbling through the courts and cannot be anything other than a distraction. It's becoming difficult to concentrate on chasing the Eagles.

Just when it seemed the Broncos were geared to give the Chiefs a real challenge in the AFC West, they slipped up against a second-string Giants line-up. That disappointing result can only suggest that there is still plenty of work to do.

Two good away wins were followed by a loss on their own patch and the Panthers will be desperate to get linebacker Luke Kuechly back from concussion. They also need to get more from their running game if they are to become a real force.

12 Tennessee Titans (up one)
Record: 3-3
Last week: Won 36-22 at home to Indianapolis
This week: 5.5-point favourites at Cleveland

Claiming a victory over Indianapolis was not only timely as a division victory in the ultra-competitive AFC South, but because the Titans look to have a favourable schedule for the rest of the season. Just two of their remaining ten opponents have winning records so if they don't make the playoffs, they'll only have themselves to blame.

With their next two games against inexperienced quarterbacks - they face Chicago next week - a three-game winning streak has come at the right time for the Saints. And with receiver Willie Snead having returned from suspension and injury, their powerful offence could be about to get even stronger.

The Bucs still haven't really found their feet and they had no chance last week after giving the Cardinals a 31-point start. An injury to Jameis Winston is a big concern as well, but they cannot wait much longer to get into their stride.

Oakland's dynamic offence appear to have gone missing and after wins against Tennessee and the Jets, they face Kansas City having lost their last four games. They need to put in a big show to give hope that the slide is not set to continue.

An extra week to reflect on conceding so many points against the Saints is probably no bad thing. They cannot keep relying on Matt Stafford to dig them out of holes if their are to take advantage of Green Bay's injury woes.

Could it be that the addition of Adrian Peterson will galvanise the Cardinals? It may take more than one excellent display from the great running back to suggest the corner has been told, but it could be that the sudden optimism is well placed.

18 Washington Redskins (up one)
Record: 3-2
Last week: Won 26-24 at home to San Francisco
This week: 4.5-point underdogs at Philadelphia

The Redskins squeezed past the 49ers but the schedule is tough from here, starting with the 5-1 Eagles on Monday. If they emerge relatively unscathed from matches against Dallas, Seattle, Minnesota and New Orleans, they could emerge as surprise contenders.

19 Jacksonville Jaguars (down one)
Record: 3-3
Last week: Lost 27-17 at home to Los Angeles Rams
This week: Three-point favourites at Indianapolis

The Jaguars are having problems stringing two decent results together. They followed a Wembley thumping of Baltimore by losing to the Jets and then couldn't follow a win against Pittsburgh with success over the Rams. Their defence can keep them in most games but they need running back Leonard Fournette to shake off his foot injury.

Another team going through peaks and troughs. The Ravens just have to hang in there but if they are out-thought by some unglamorous quarterbacks over the next few weeks, they will kiss their hopes of catching the Steelers goodbye.

21 Miami Dolphins (up one)
Record: 3-2
Last week: Won 20-17 at Atlanta
This week: Three-point favourites at home to New York Jets

Their fightback at Atlanta was admirable and Fins fans will hope it inspires them to better things, but they are scoring an average of just 12.2 points a game, so it is not hard to see where the problems are. Miami have some hard games towards the end of the season, so they need to start moving now.

The Bills have had a week's rest and a visit from Tampa Bay may not look as intimidating as once before. By winning against Denver and in Atlanta, they have shown they are not a team to underestimate. Buffalo could make a move in the next couple of weeks.

The Rams' visit to London is an exciting prospect, but seven of their next eight matches are against teams who head into Week Seven at at least 3-3. We are about to see just how good they are.

They Texans are still coming to terms with JJ Watt's broken leg and a pedestrian win against the Browns gave us little to go on. But they reached the playoffs without their defensive star last season and they look to have a better quarterback in DeShaun Watson, so all is definitely not lost.

Two straight wins have made the Chargers' record look a bit more respectable, but the AFC West is a tough division. We'll know more about their prospects after their clash against the Broncos and a trip to New England. They may be of interest if they can get to 4-4.

Another team who have recovered from a dismal start with a couple of victories, but it is a tough assignment for the Bengals coming off a bye with four of their next five matches coming away from home. They'll hope Andy Dalton will be up to the challenge.

It was a spirited show from the Giants to claim a win over the Broncos, but their team are so banged up with injuries that expectations should be quite modest over the next few weeks. The mood should be lifted by winning their first match though.

28 Chicago Bears (up one)
Record: 2-4
Last week: Won 27-24 at Baltimore
This week: Three-point underdogs at home to Carolina

Quarterback Mitchell Trubisky looks exciting and winning his first match in his second NFL outing should be a huge boost to his confidence. They couldn't force themselves into the NFC North title race, could they? With five games against teams who are 3-3 or better coming up, we are about to find out.

29 Indianapolis Colts (down one)
Record: 2-4
Last week: Lost 36-22 at Tennessee
This week: Three-point underdogs at home to Jacksonville

It has been difficult to pinpoint when quarterback Andrew Luck might make an appearance, but there are big problems on the other side of the ball for a team who have conceded an average of 32.5 points per game. It is difficult to see them making much progress.

There seems to be scope for the Jets to improve as they came close to pushing the Patriots all the way last week. They have already exceeded many expectations by winning three games, but running back Bilal Powell's calf injury is a concern.

Since a 23-3 loss against Carolina in Week One, the 49ers' last five defeats have been by three points or fewer, so maybe they are not that far away. You can't push up the rankings until you start getting some wins, though.

With DeShone Kizer coming back for this week's match against the Titans, Cleveland have made ten quarterback changes in their last 22 matches. And they wonder why they have won just one of those games. Still, there's always next year.