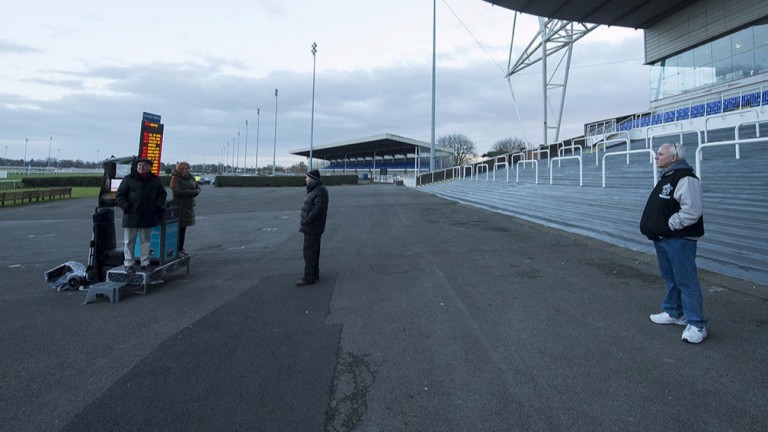 My weirdest Kempton memory was debating the correct pronunciation of scone with Phil Taylor in the days when we officially sponsored the big three-mile handicap chase that takes place in February and which everyone still thinks we sponsor, a benefit Hennessy will enjoy for a couple of decades.

After some good-natured discussion about whether it should rhyme with cone or gone, I asked Sir Clement Freud, who had just returned to the table, for the definitive view. I had assumed he would regard anyone who said it in what he considered the wrong way to be absolutely sub-human, but instead he calmly replied: "Both are perfectly acceptable."

My fondest Kempton memory was Wayward Lad's first King George victory, in 1982. It was my debut at the course and it was magical to see Francome and the seven-year-old grab the first of the gelding's three triumphs in the race.

And yet even though I have only ever regarded Kempton as a fine racecourse and an enjoyable place to visit in the 34 years since I first went there, I find myself surprisingly short of sorrow that the place seems likely to be flattened in four years' time.

Had the Jockey Club announced on Tuesday that it was shutting Sandown I would have been heartbroken. Losing Kempton is more acceptable in comparison.

Obviously I'd rather not lose Kempton or any other racecourse. They are all special in their own ways, but there was never really anything specifically thrilling about going there.

But while I can live contentedly with the transfer of the all-weather fixtures to the planned synthetic track at Newmarket and the dispersal of its other jump meetings to various parts of the JCR estate, the moving of the King George amounts to about 99 per cent of the sadness I feel about the fate of Kempton itself.

There is no doubt the whole jump season will be tarnished by the switch of this epic race some three miles across the Thames to Sandown. It simply will not be the same contest.

Indeed I would go so far as to say the entire face of staying chasing in Britain will change significantly for the worse because Kempton will no longer stage the King George.

Without it we will lose the classiest race of its type. It is the one time you can be pretty much guaranteed three-mile chasers will look like Rolls Royces rather than Range Rovers. Everything now will be a slog until the Betfair Bowl, which, through no fault of its own, is an under-appreciated contest.

I love Sandown but it is an anti-clockwise Cheltenham in that its uphill finish means a slow-motion finish will replace the scintillating test of speed and stamina we are treated to at Kempton.

Perhaps Sandown will consider using its 2m6f chase course to offset the extra emphasis on stamina a 3m King George is likely to provide, but it will still be steep uphill to the finish and probably softer than we are used to. I would sooner have seen the race transfer to Ascot, which is not owned by the Jockey Club but, given it insists the closure of Kempton is for the good of the sport, who cares?

And on the wider issue of whether closing a course as important as Kempton is good for the sport, we have to acknowledge JCR is not awash with money to carry out refurbishments to its other venues, and that the sporting world is ever evolving, which is why Britain no longer has arenas that host jousting, archery and falconry.

What I would say is the closure announcement was not handled with the group's usual elegance. Fair enough, it did not want the headline to be 'We are closing Kempton', but it tried too hard to wrap this bitter pill in sugar.

And then, as people voiced their anguish on Twitter, the PR team kept popping up to remind us it wasn't definitely going to shut, which kind of made it worse, because presumably the only way Kempton will remain open is if the plan to flatten it and build a third racecourse at Newmarket is not executed properly or something goes wrong like a property crash marmalising the value of land in Sunbury-On-Thames.

If that is the case, Kempton might just remain open but it will always be on death row and as one of the sport's best known venues it deserves better than that.

If I am still breathing in 2026 it will be a result, and as such it is hard to get too worked up about things such as how many teams will contest that year’s World Cup finals.

But the expansion of the tournament from its current perfect format of 32 teams to 48 will do little to enhance the event beyond achieving the perfectly laudable objective of enabling as many countries as possible to savour the magic of competing in the finals of a World Cup.

There will be 16 groups of three, with the top two teams making it into a round of 32.

The group stage will therefore be shorter, which is no bad thing, but the knockout stage longer and more random, which diminishes the chances of the best teams making it to the final stages.

It was suggested Fifa could have expanded to 40 teams with eight groups of five, which sounds a better idea but would require the tournament to be extended significantly with 80 matches needing to be played before the knockout phase.

If the increase of finalists to 48 is not ideal as far as the main event itself is concerned, its main impact will be felt in the qualification process, which now threatens to become intolerably dull.

For 14 months the powerhouses in Europe will have to congregate every so often for the formality of cruising into the finals, while in South America it will almost be harder not to qualify than to qualify with potentially six places up for grabs.

All the more reason, therefore, that the Fifa bigwigs finally listen to the Thursday Column and stage a brief qualifying competition in the June of the previous year.

Betting myths need to be busted

It's a close call for the biggest betting falsehood of the week award, with two myths having been prolifically bandied about in recent days.

First up we have the idea that because the rule 4 deduction that is applied to winning bets when a runner priced at 14-1 or shorter is scratched generally favours punters overall it should be regarded as fair game for the bookies to offset the disadvantage by shortening the odd horse that is about to be withdrawn so the deduction is as big as possible.

This could not be further from the truth. If the layers believe they are unjustly treated by the rule 4 format they should attempt to negotiate changes that would make it fairer, rather than shave a couple of points off a horse that has just completed two circuits of the track after bolting.

Misconception number two is that if FOBTs were taxed or limited in such a way that bookmakers' lavish profits on them were hugely reduced they would have to start laying more bets on racing.

This is monumentally illogical and suggests that as things stand betting companies don't need to try to trade racing as profitably as possible because they can just sit back and count the money from the machines.

Why would they do that?