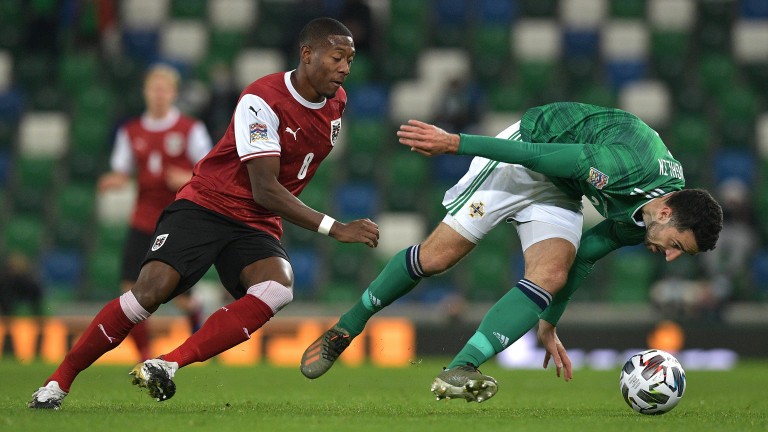 David Alaba (left) provides Austria with real quality in the final third
Charles McQuillan
1 of 1
By Joe Casey 9:54AM, JUN 14 2021

Austria were well fancied at Euro 2016 after an impressive qualifying campaign, but they struggled from the off and were sent packing with just a point to their name as they were beaten by Hungary and Iceland.

Franco Foda’s men will be looking to avenge that disappointment and they have a squad with Bundesliga quality running throughout it, with 21 of their squad of 26 turning out in the German top flight.

However, they made heavy weather of a fairly straightforward qualifying group and have started poorly in their World Cup qualification. In March they drew 2-2 with Scotland and were beaten comfortably 4-0 at home by Denmark.

A routine win over the Faroe Islands between those results has not done much to allay fears over their form leading up to the big tournament.

This is likely to be a last major tournament for captain Julian Baumgartlinger, plus Stefan Islanker and Andreas Ulmer,  and a last chance to improve on their record of no wins at a World Cup or Euros since 1990.

Baumgartlinger is also recovering from a torn cruciate ligament. His fitness will be key as he anchors their midfield and allows the more creative Marcel Sabitzer to flourish.

David Alaba and Christoph Baumgartner also provide quality in the final third and in Sasa Kalajdzic they have a 6ft 7ins target man with 16 goals to his name in the Bundesliga this season. He could keep Marco Arnautovic out of the side, with question marks over the fitness of their mercurial talisman who now plies his trade in the Chinese Super League.

Defensively Martin Hinteregger has impressed at the back for Eintracht Frankfurt this year and will probably be partnered by the experienced Aleksandar Dragovic. But Foda has struggled to pin down a number one goalkeeper and all three stoppers in his squad of 26 have fewer than ten caps.

Austria give the impression that they are not quite the sum of their parts and they will need to be more attack-minded if they are to benefit from their favourable draw.

Manager - Franco Foda: Franco Foda has been manager since 2018 but the fans have yet to truly warm to him.His team selection is perceived as conservative and a bad run could lead to his departure.

Prospects: It is probably between Austria and Ukraine for second place in the group, and if their stars turn up they will be a stern test for anyone. However, their track record in major tournaments does not inspire confidence and progress beyond the last 16 looks unlikely.

Inside info - Andreas Wagner, football journalist: The Austrian squad are eyeing up second place in Group C, with the Netherlands clear favourites to progress.

Their starting 11 will again be built around superstar David Alaba and a lot could rest on their opening game against North Macedonia, which looks a must win.

FIRST PUBLISHED 2:56PM, JUN 10 2021
Austria give the impression that they are not quite the sum of their parts and they will need to be more attack-minded