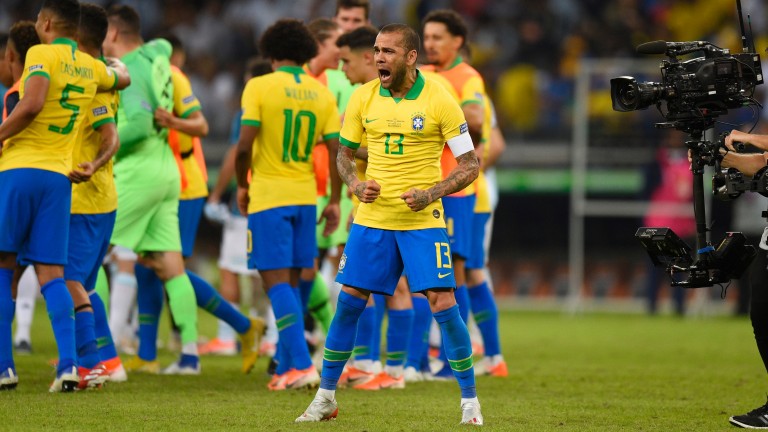 Brazil haven't lost a competitive home game since the 2014 World Cup and deserve their status as red-hot favourites to defeat Peru in the Copa America final.

The match takes place at the Maracana Stadium where Brazil infamously lost 2-1 to Uruguay in the final match at the 1950 World Cup.

However, Brazil have an excellent record at the legendary stadium which was the setting for their 3-0 victory over Spain in the 2013 Confederations Cup final.

Just getting to this final was a triumph for Peru, who are bidding to win the Copa America for the first time since 1976.

The Incas had limped into the knockout stage following a 5-0 defeat to Brazil in Sao Paulo and were given little chance in their quarter-final against Uruguay.

They came through 5-4 on penalties, showing a steely nerve from 12 yards, but for much of the game it was easy to understand why Uruguay were strong pre-match favourites.

It was a hugely frustrating night for Uruguay, who had three goals ruled out and squandered several gilt-edged chances.

But Peru marched on and luck was on their side in the semi-final against Chile which they won 3-0 despite losing the shot count 19-9.

Chile paid the price for some dreadful defending but Brazil are highly unlikely to make the same mistakes.

For much of the tournament the Samba Stars have been happy to win ugly by cutting out defensive errors and demonstrating a clinical touch in front of goal.

They had to do a lot of defending in their 2-0 semi-final success over Argentina but excelled in the penalty boxes (strikers Gabriel Jesus and Roberto Firmino were both on target) and the clean sheet was their seventh in seven games.

Offensively, they miss the outstanding quality of Neymar, who has become their talisman in recent years.

However, they look a more solid unit without the Paris St-Germain player and are likely to finish the job with another focused, professional performance.

Brazil
Filipe Luis (thigh) missed the semi-final against Argentina but may return. Richarlison (mumps) has left the squad.

Peru
Peru are still without Jefferson Farfan (knee), who hasn't featured since the group stage.

Strengths
The great Brazilian teams of the past are fondly remembered for their attacking prowess but Tite's side possess a strong defence underpinned by centre-backs Thiago Silva and Marquinhos.

Weaknesses
Without Neymar they can be a little too predictable and sometimes lack the killer pass. Philippe Coutinho started the tournament brightly but has faded.

Star man
Gabriel Jesus was out of favour at the start of the tournament but his confidence is on the rise after scoring the opener against Argentina.

Weaknesses
Their defence lacks top-quality players and is a concern. Peru's goal led a charmed life in the knockout matches against Uruguay and Chile.

Star man
Guerrero wasn't fully fit at the 2018 World Cup but he looks in much better shape this summer and has netted twice.