Video nasty is tarnishing my love for the beautiful game 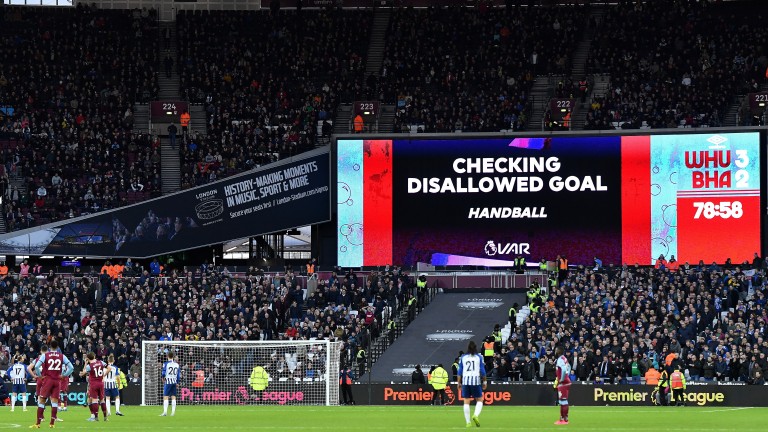 VAR checks a goal during the Premier League match between West Ham United and Brighton
Justin Setterfield
1 of 1
8:41PM, JUL 31 2020

Okay, so it’s clearly going not going to be canned altogether, but there are some vital changes that need to be made to the way video is used to officiate football matches if the deplorable scenes that have dogged the 2019-20 season are not to become a permanent stain on the game.

There was a time when it felt like enough VAR advocates had turned on it to suggest it might get the heave-ho, but then focus understandably turned to a global pandemic and most people seemed to become less hostile towards it.

So it looks like we are lumbered with it, which is a pity because VAR has been even worse than I had feared and has diminished my love of watching football significantly.

I detest its constant interruptions, its ability to find new ways to disallow goals and turn elation to despair, and its unwelcome intrusion into the general narrative of the sport.

It has, as predicted, been the cocktail of VAR plus the new interpretations of the handball law that have been the main problem, along with the completely unnecessary insistence on trying to apply such a forensic analysis of every borderline offside decision.

Lest we forget, offside was designed simply to prevent teams lumping the ball long to a big guy up front. Using a linesman to judge with his expert eye whether or not a player was offside was a perfectly effective way of doing it.

We have never felt it necessary to be so precise about offside decisions. If an attacker looks level to the lino then that’s all we need. The flag either goes up or stays down and the match flows.
Halting play for ages while these idiotic coloured lines are daubed across the screen is sheer madness and has done absolutely nothing to benefit football.

Likewise, awarding penalties when nobody in the ground spotted an offence is a pointless new distortion of the game that has caused so much ill-feeling. Footballers have arms and occasionally they are going to inadvertently make contact with the ball.

We have accepted this just fine down the years but now possessing arms is enough to cause goals to be ruled out if the limbs accidentally touch the ball in the course of a goal being scored. This just isn’t progress.

Obviously I would chuck the whole thing in the bin and go back to how it was when referees and their assistants were deemed perfectly capable of doing the job, but if we have to live with VAR we should use it only to correct obvious errors and eradicate diving (in tandem with longer bans for simulation).

And those in charge of deciding how and when it is deployed must resist all these imbecilic calls for more use of the pitchside monitors for two reasons.

One, it creates even more delays if the ref is obliged to jog over to the sideline to review an incident; and, two, as long as the video ref is qualified, which they always are, there is no reason why they cannot make the decision quickly and without the possible complication of the match arbiter’s ego preventing him reversing the original call.

There have obviously been a few occasions when VAR has corrected a faulty on-field call, and that is why if it is to be persevered with it should be solely in order to step in to clear up those very odd moments when a serious rick has been made.

This has not been a great season for many reasons, chief of which has been the introduction of this hideous, joy-killing technology.

Let’s just hope it is used more sparingly in future because if it carries on like this I doubt I am the only person for whom their lifelong love of football will be massively tarnished.

It was telling that a Watford fan I consoled this week said that at least next season he would not have to put up with VAR.

I have a suspicion I am going to find Jose Mourinho far less easy to dislike in the remaining furlongs of his managerial career.

When he first rocked up at Chelsea he oozed charisma and we all swooned, but as time went on and his standing in the game grew he became increasingly sour and unpleasant.

Now, however, his snarling and moaning seem less objectionable due to the chances of him ever being successful again having waned so much.

He gives it the big 'un about having guided Spurs to sixth place when they were 14th at the time of his appointment but these days, instead of getting infuriated at his chutzpah given they were only three points off fifth place when he arrived at the Lane, we just think ah bless him.

It was actually quite sweet to see him and his coaching colleagues jumping around so ecstatically after at the end of their final game of the season. Selhurst Park was mostly empty but the Spurs staff broke the suburban Sunday afternoon silence in South Norwood as they huddled together in joy at having grabbed the point that took them into next season’s Europa League.

Having reached the Champions League final the previous campaign, sixth place will not have been considered a cause for celebration among most Tottenham fans, and there is also the chance Mourinho will have been trying to provide some sort of happy ending to the Amazon documentary that I have so little desire to sit through.

But on the other hand it provided a nice reminder that for many people the Europa League is worth challenging for.

There was never the general antipathy towards the Cup Winners’ Cup and Uefa Cup that there is towards the amalgamated competition and it would be nice if English fans could embrace and enjoy the tournament rather than regard it as some sort of nuisance.

Nothing beats cash in the hand on race day

If you don’t ask you don’t get, but attempts by the Federation of Racecourse Bookmakers to get the government to reverse its rule that all transactions at those sporting events that have been allowed to resume must be cashless seems doomed to failure.

Even if Parliament had not broken up for summer it is likely the request to allow the four bookmakers who will be standing at Goodwood on Saturday to take cash bets would have found itself extremely close to the bottom of the relevant department’s in-tray.

This is a shame. On-course bookies have had to sit and suffer like so many other people and it seems utterly illogical that cash cannot be used outside but apparently can at indoor outlets.

With 5,000 Goodwood members in attendance as part of a trial to see how crowds can be reintroduced to sport venues, the four bookmakers who accept that chance to take part on Saturday are not expecting to make fortunes. But their earning potential is going to be further limited by the requirement that they must use contactless technology.

There is no indication at this stage that this is part of some sinister plan to insist on cashless trading on a permanent basis, but some layers are concerned and have opted not to stand on Saturday.

Let’s hope the trial is a success in that it shows cash is still king in the ring. I, like many punters, bet far less frequently with bookmakers when I am racing than I used to, but when I do one of the main appeals is that lovely old feeling of getting a wad pressed into your hand after your horse has won.

Tapping your card and being informed your winnings have been sent to your bank account just wouldn’t feel the same, albeit the fact so many young folk regard notes and coins as some kind of quaint concept like Green Shield stamps these days means there will need to be some form of cashless functionality if course layers are to remain viable in future.

Nobody is ever again allowed to discuss unlucky bets. Because there will never be a punter as unlucky as those poor souls who backed Jesse Lingard to go through the entire season without having a goal or an assist to his name.

The forgotten Manchester United man was backed at 66-1 to complete this unwanted feat and after a miserable season for the former England international, his backers were sitting pretty as the last match of the campaign ticked towards its conclusion.

Even when he trotted on to the field as a 77th-minute substitute the odds of the coup coming unstuck were enormous, and they drifted to astronomical when the clock reached 97 minutes and Lingard had neither scored nor assisted.

But then Leicester keeper Kasper Schmeichel decided to attempt to dribble the ball past a United player on the edge of the box. That player was Lingard, who dispossessed him and rolled the ball into the empty goal.

I thought I’d had some bad luck in my betting career but nothing comes close to that. My sympathy goes out to those punters who suffered that ludicrous fate.