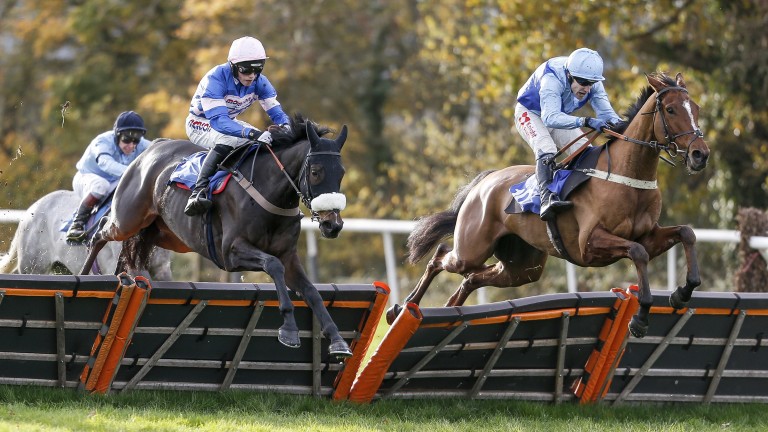 The use of 48-hour declarations for jump races is officially temporary and will revert to 24 when the time is considered to be right
Alan Crowhurst (Getty Images)
1 of 1
4:27PM, JUL 22 2020

A two-day strike by London Underground staff in 2014 was used as a study by academics from Oxford and Cambridge, which revealed that one in 20 commuters who were forced to find a different way of getting to and from work during the disruption maintained their new journey on a permanent basis.

There are likely to be numerous other examples of people and society discovering that changes that were forced upon them during the coronavirus pandemic turn out to be preferable to what they previously did.

It is hard to imagine, for example, that there will be much appetite for a widespread resumption of five weekly return rail journeys from home to work, while it is hoped more eco-friendly ways of travelling and living will improve both the nation’s health and the world we live in.

In sport, not every change that has had to be made during these tumultuous times has been such a success that there are indisputable grounds for retaining them.

I have no desire to see wealthy clubs continue to gain an advantage from their superior squad strength by being able to make five substitutions per game, and nor do I want halves to be halved courtesy of drinks breaks that have mutated into tactical breaks and will, if retained, inevitably then mutate into ad breaks.

Racing has had to adopt different methods of operating, and not all of them will be missed when they are no longer necessary.

But one benefit of the new way of doing things has been the requirement to declare horses two days before all races, rather than just those on the Flat.

This is something that should have been introduced ages ago, and the argument for retaining 48-hour jumps decs has been strengthened by the absence of any problems arising from their temporary implementation.

The case for keeping 24-hour declarations when Flat racing switched to 48 was twofold: that finalising jumps fields earlier was less important because the international betting market had a far smaller appetite for jump racing; and that rain-induced going changes are likelier to happen in winter, creating unwanted increases in non-runners.

Actually, rainfall is distributed far more evenly throughout the year in the UK than most people think, and sudden downpours are as likely to affect Pontefract in August as they are Ludlow in January.

Besides, for reasons of operational convenience, all Sunday jumps cards are already finalised on the previous Friday, so if it can work just fine for one day of the week it can work for the other six.

The benefits of knowing which horses are running a day earlier are not monumental but they are sufficient to justify making the temporary switch permanent.

Global demand among punters for jump racing may not be as strong as for the Flat but that does not mean it is non-existent and a growth in global popularity of British and Irish jump racing would do nobody any harm.

The domestic media, including TV as well as print and online, would also be able to arrange better presentations of cards, create features and build up the races if they had more time to do so.

And while some owners might find themselves on the receiving end of a defection on the rare occasions when a deterioration in conditions genuinely warrant it, many would also surely relish an extra day to assess their horses’ chances and generally get enthused about upcoming contests.

The use of 48-hour declarations for jump races is officially temporary and will revert to 24 when the time is considered to be right because such a fundamental change cannot be made without a full consultation process.

But racing would be better off if all fields were known two days in advance so it is hoped this eventually becomes a positive permanent change.

Cowley brothers are likely to be more successful than rash Terriers

There have been a few examples in recent years of managerial changes that have worked out well despite appearing completely barmy at the time, which is why I lambast Huddersfield with a slight sense of caution.

But their decision to jettison Danny Cowley just after he had completed a superb job in keeping Town in the Championship seems utterly illogical, even though some fans who were initially appalled will be appeased by the probable appointment of Leeds coach Carlos Coberan as Cowley’s replacement.

Cowley arrived in September with the Terriers in disarray, having responded to their relegation from the Premier League by taking just one point from their first six matches.

He and his assistant and brother Nicky, having left Lincoln after three successful years, set about the rebuilding process and put the seal on it with a stunning victory over West Brom last Friday that killed the threat of relegation.

Two days later they were fired. It is hard to know why someone would lose their job for fulfilling the very tasks for which they were recruited, but we have seen numerous illogical football sackings down the years so should not be surprised.

There was much surprise last week when Clive Tyldesley was replaced, rather than sacked, by ITV as their lead football commentator, not least by the man himself, who wasted little time making his feelings known via a video he posted on Twitter.

It made for fascinating, if slightly uncomfortable, viewing. Tyldesley was emotional and unhappy, and he chose to make it crystal clear that it was not his decision and that he was annoyed and baffled.

Nobody likes losing a position they enjoyed and it was evident how much pride Tyldesley had taken in being the station’s main man for so many years.

But even though he acknowledged that many people are losing their jobs at the moment, my main feeling upon reaching the end of his 135-second message was that it would have been more dignified to have kept quiet and just taken it on the chin.

He has had a great run in the ITV gantry and at 65 it should not have been a complete shock that his employer might opt to install someone else, in this case Sam Matterface, as their top commentator.

Tyldesley is a really good operator, as is Matterface, but he never reached national treasure status and perhaps in time he will realise he has had a fine career and is still wanted by ITV for World Cup and European Championship duties, so it could be a lot worse.

As for the Cowley brothers, it will be fascinating to see how they, and indeed Huddersfield, get on in years to come. My money would be on the Cowleys being more prosperous.

Meltdown of golf's incredible sulk DeChambeau was a delight

The highlight of the sporting week was Bryson DeChambeau taking ten shots to complete the par-five 15th hole to miss the cut in the Memorial Tournament in Ohio. It was marvellous.

Under normal circumstances I would feel profoundly sorry for someone enduring such a spectacularly miserable sporting meltdown, but DeChambeau does little to stimulate sympathy.

He first showed what he is all about when rudely offering the briefest, least heartfelt handshake when beaten by Richard McEvoy in the European Open a couple of years ago, since when he has berated a cameraman for having the temerity to film him and generally taken slow play to a new level thanks to his absurdly lengthy technique for lining up putts.

So his quintuple-bogey, which involved some inexcusable ill-mannered dealings with two officials, was a delight to see.

The chunky Californian, who emerged from lockdown looking like the Incredible Hulk, is said to be the future of golf, in which case the sport will lose fans and participants at an even quicker rate than it already is.