Bookies are in fear of early McGregor upset 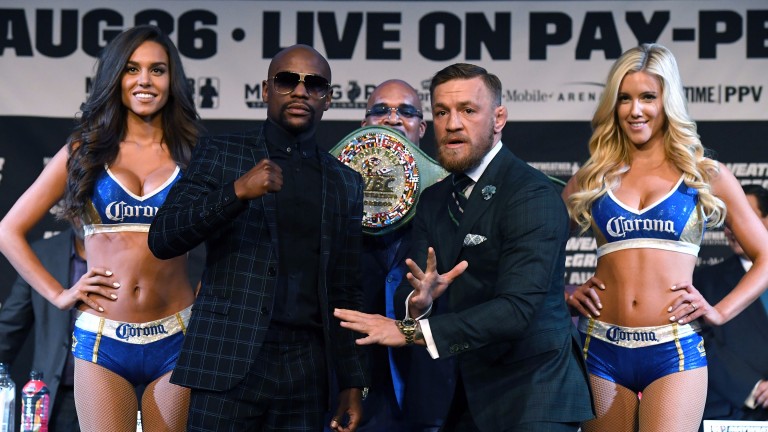 Whether you see it as a fascinating battle between two of the greatest fighters on the planet or a cynical money-grab, Mayweather v McGregor is turning into the sports betting event of 2017, and with small-stakes punters across the world all backing the underdog, a win for the charismatic Irishman would see the bookmaking industry facing one of their biggest ever payouts.

We asked the oddsmakers for their thoughts on the big fight and their best bets.

Who has the weight of money been for?
Steve Freeth, bet365 Leicester, Trump, Brexit, Fury & Bellew – the underdog is king. This is an an incredibly popular fight, and I’ve never seen anything like it. An early victory for McGregor would see our biggest ever sports payout.

Karl Elworthy, BetBright The money has certainly been coming for McGregor in the last few weeks. But I can’t see him getting much shorter in the betting and with Mayweather now becoming a very backable price, I would expect to see some late money coming for him.

Joe Lee, Betfair Just over 70 per cent of total bets have been for McGregor, but we expected a little more given the recreational nature of the audience and our bigger bets have all been for Mayweather so we’re in a neutral position on the fight winner at the moment.

Mike Bell, Betfred Since the fight was announced there have been an unprecedented amount of bets being placed on McGregor both online and in our shops. I thought that come fight week that would start to calm down a bit but if anything it is ramping up even more.

Alan Algar, Betway All the money has been for McGregor in fight-winner market and we are still seeing money for the Dublin man. McGregor by KO, particularly in round one, would be a near-record loss for the company.

Yasmin Leonard, BoyleSports We’ve seen floods of support for Conor. Floyd is of course the overwhelming favourite but Conor continues to be heavily backed and poses a massive liability.

Tommy Young, Coral Up until this week the vast majority of money was for McGregor but some big bets in the last few days have swung it round and now more has been staked on Mayweather. McGregor is still a huge liability though due to the big prices he’s been backed at.

Joe Crilly, Hills It’s been one-way traffic on McGregor from the moment we released the fight in December.

Tom Waters, Ladbrokes We’re taking ten times as many bets on McGregor to win the fight, but hopefully the big money will come for Mayweather. McGregor in rounds one, two and three are the worst results in the book.

Paddy Power, Paddy Power 80 to 90 per cent of the bets taken have been for McGregor so if he wins it will really take the bookies’ pants down, not just here but in Vegas too.

Chris Ingham, Sky Bet McGregor without a doubt. Fans are really getting behind the Irishman and hoping he shocks the world. We’re starting to see bigger stakes coming for Mayweather, but come fight night McGregor looks like he will still be way ahead in terms of stakes.

Tai Beck, 188bet Conor McGregor. His odds are now half what we opened up at.

Wayne Lincoln, Sporting Index From day one, all the money has been for McGregor. We can’t give Mayweather away at the price.

What have been your most popular markets?
bet365 If McGregor’s wins he wins early according to the punters – we have telephone-number liabilities for those early rounds.

BetBright McGregor in the winner market has by far proved the most popular. Punters also seem convinced he can end the fight by KO or TKO.

Betfair The winner market is by far our most popular in terms of bet count and volume staked. A market which has been driving a lot of interest is Gone in 60 Seconds – plenty of punters are showing significant faith in McGregor to get the job done quickly.

Betfred The round-betting markets for McGregor will see massive liabilities. McGregor to win in round four has been the most popular bet due to his prediction during the media tour where he said that he will KO Mayweather in four.

Betway McGregor’s talk of an early knockout is resonating with his supporters. Round-betting and KO victory for Conor have been the most popular aside from the winner market. A popular big-priced special has been McGregor to win the first four rounds on points.

BoyleSports Round betting has been exceptionally popular as McGregor has said he will KO Mayweather inside either two or four rounds. Punters are particularly getting behind these markets.

Coral Round betting and fight winner are far and away the most popular. Punters really fancy McGregor early on.
Hills McGregor to win by KO or TKO in the early rounds. Round four is our worst result.

Ladbrokes We’ve had lots of bets on individual round betting. To be knocked down and win has also been popular as punters hope for an entertaining fight.

Paddy Power Everyone is backing Conor in the early rounds so we are hoping Floyd avoids that big left hand.

Sky Bet With Conor being an attractive price just to win the fight, the winner market has been the most popular. As time has gone on and he has started giving his predictions, we has seen money come heavily on the round markets, as well as customers creating their own bets on how they think the fight will play out.

188bet One of our enhanced specials is ‘fight to end within 59 seconds’. We’re holding the price but the liability is increasing rapidly.
Sporting Index Fight supremacy and total minutes have been very popular.

Do you think Conor McGregor stands a chance?
bet365 I didn’t originally, but now yes. The money tells us that it’s maybe not the mismatch that many thought it would be. McGregor is younger, fitter, bigger and hungrier.

BetBright A very slim one. I can see McGregor getting frustrated and Floyd playing with him. His best hope is a KO in the first half of the fight but Floyd would have to make mistakes and that’s something we have never seen before. I was leaning towards a Mayweather decision but as the fight gets closer I can see McGregor being stopped in the mid to late rounds.

Betfair McGregor is not a boxer and this is a boxing match against one of the best fighters of this generation. It’s difficult to see how he does stand a chance, but punters believe otherwise.

Betfred It’s a tough ask. Barring any freak injuries as we saw in the Haye v Bellew fight I just don’t see how he can win. Mayweather has been in with the best boxers on the planet and has never been beaten so for him to lose to a man having his first professional boxing fight is unlikely to the least. That being said anything can happen in boxing and that’s what makes it so exciting. Nobody gave Buster Douglas a chance against Mike Tyson and we all know what happened there.

Betway Conor’s reach and height are both superior to Mayweather’s. Crucially, Floyd is a 40-year-old man with some injury concerns, and it’s worth noting David Haye was a ‘sure’ thing not six months ago. Shocks do happen.

BoyleSports Nobody in the boxing world thinks he stands a chance but his legions of supporters do and I agree.

Coral No. It’s a world-class boxer against a total novice. McGregor is great at what he does but he is not a boxer and even if Mayweather is rusty after two years out he will still have too much.

Hills It would be a huge surprise to me if McGregor was to beat the greatest defensive boxer of all time in his first pro bout, even taking into account Mayweather’s age and ring rust. The American may be at his most vulnerable in the first couple of rounds.

Ladbrokes McGregor does stand a chance, but at the current odds he is ridiculously short and no value whatsoever. Mayweather’s age and inactivity could play a part, and McGregor will bring a totally unorthodox style to the ring. A powerful left hand and a good chin means McGregor has a puncher’s chance.

Paddy Power Mayweather has been one of the most strategic boxers over the years and as long as he doesn’t do anything stupid Conor won’t get a look-in.

Sky Bet McGregor’s best chance is to catch Floyd in the first few rounds before he’s managed to get into his rhythm. After being out of the ring for two years there’s a chance Floyd may have some ring-rust. Once it gets past three or four rounds Floyd will begin to take over.

188bet A chance yes, there’s always a chance in boxing. But I don’t see any value at all in his price now.

Sporting Index He has a puncher’s chance but that’s about it. It’s the best boxer of the last 20 years against an exceptional MMA fighter in a boxing fight. That says it all.

If you had one bet on the fight, what would it be?
bet365 A late victory for Floyd is the best outcome and that’s what my money would be on.

Betfred Mayweather by KO, TKO or DQ. Floyd has said that if this fight goes the distance it will be seen as a victory for McGregor and I agree. Look for him to go for the stoppage as the fight goes into the later rounds.

Betway Mayweather is faster, more experienced and more skilled. He has always been adaptable and will be able to handle an early McGregor onslaught. Mayweather can take advantage of a tiring McGregor and record a KO in rounds ten to 2.

BoyleSports Mystic Mac has been on the money on more than one occasion so I’d back him to shock the world.

Coral Mayweather in rounds one to six looks good to me. I can’t see McGregor going deep into the fight.

Hills Despite his low KO percentage over the last decade Mayweather should be on a different level to McGregor as a boxer and a win in rounds 5-8 appeals.

Ladbrokes Mayweather will get his timing after four rounds or so, and the referee will stop Conor on his feet between rounds seven and nine.

Paddy Power My money will be on Mayweather by KO or TKO, not massive odds but very likely to happen.

Sky Bet Mayweather to win between rounds seven and 12.

188bet Mayweather to win between rounds four and six.