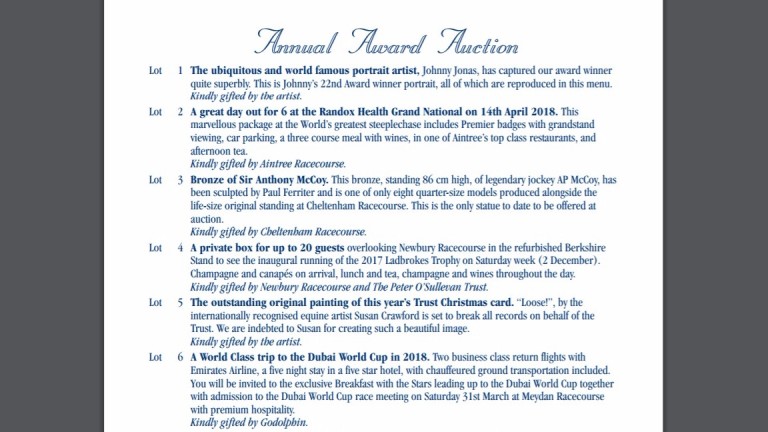 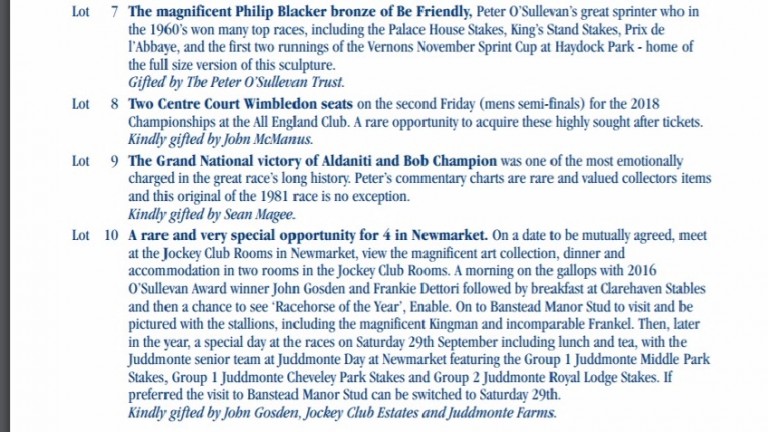 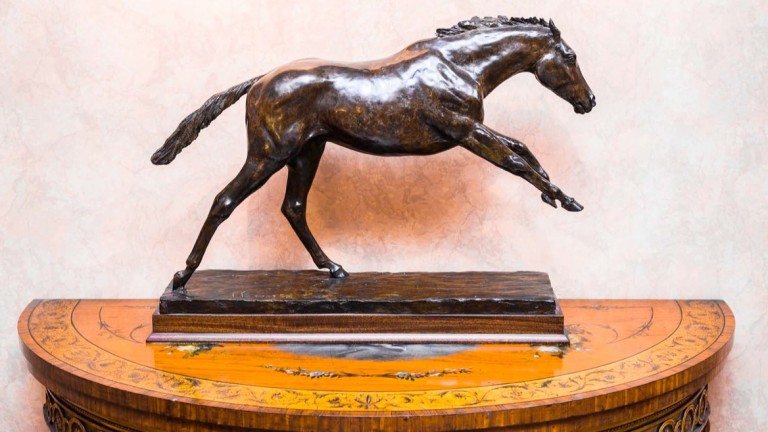 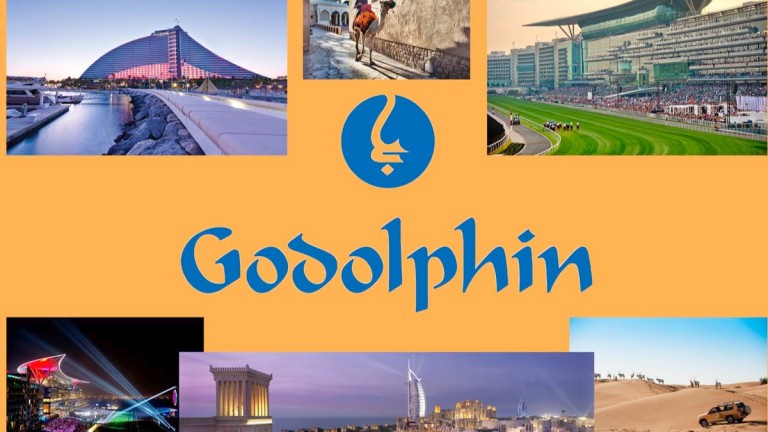 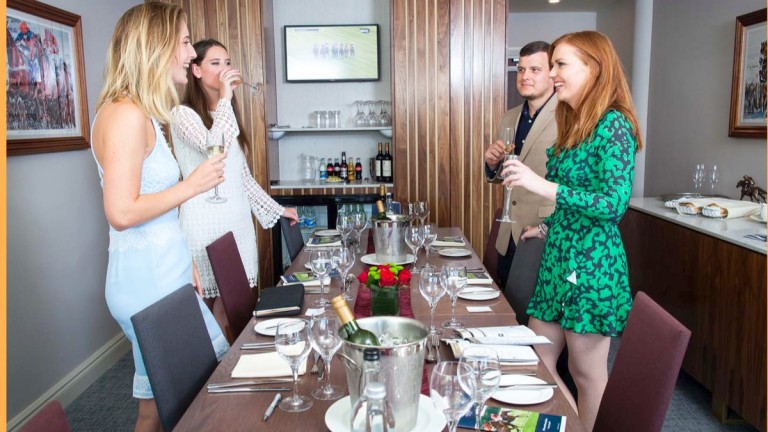 A money can’t buy morning with John Gosden and Frankie Dettori on the gallops in Newmarket, a trip to Banstead Manor Stud to visit Frankel, Kingman et al, and a day’s racing as guests of Juddmonte.

That is arguably the star among ten lots up for auction at the Sir Peter O’Sullevan Charitable Trust annual lunch, at the Dorchester Hotel in London a fortnight today.

The winning bidder and their party will experience two exceptional days courtesy of the trainer – who won the prestigious Sir Peter O’Sullevan award in 2016 – and Enable’s owner-breeder Khalid Abdullah.

Nigel Payne, chairman of the trustees, said: "We've one exceptional lot at the end, which is four people to breakfast at John Gosden’s and have a morning on the gallops with him and Enable, followed later in the year by a trip to Banstead Manor to see Frankel and Kingman, and then onto the races at Newmarket.

"It’s been donated by John and Juddmonte and really is the sort of experience money can’t buy."

Other lots that have historically done well include Godolphin's donation of a premium hospitality trip to the Dubai World Cup and a pair of debenture tickets for men's semi-final day at Wimbledon, which has been gifted by JP McManus' son John. 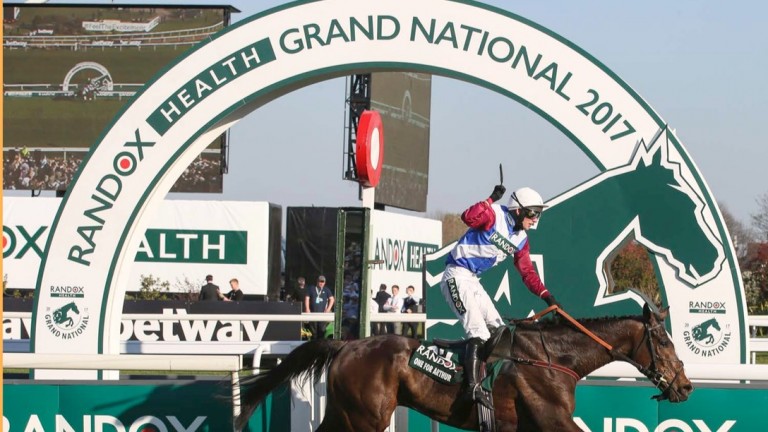 Bids are already being taken for this particular lot, with the Newbury meeting falling less than a fortnight after the lunch on December 2.

There are several unique art works on offer, with a maquette of the statue unveiled at Cheltenham of Sir Anthony McCoy and a Philip Blacker bronze of O'Sullevan's crack sprinter Be Friendly, which belonged to the legendary commentator and whose lifesize version is a fixture at Haydock. 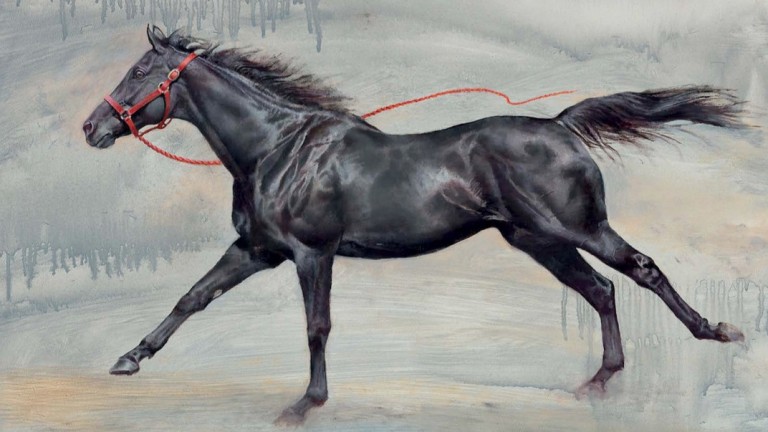 In 2016 one of the most sought after items in the auction was O'Sullevan's annotated commentary sheet from the 1974 Triumph Hurdle, won by his own horse, Attivo.

O'Sullevan was renowned for his meticulous preparation and his sheet for Aldaniti's 1981 Grand National – replete with hand-painted colours and margin notes – looks sure to be another highlight of the auction.

Aldaniti's owners, Nick and Valda Embiricos, will be among nearly 500 people attending the lunch, first hosted by O'Sullevan in 1997 and which led two years later to the foundation of his charitable trust in support of six equine charities.

"Every single person who booked a table last year has re-booked, and when you consider Peter died in 2015 it's pretty remarkable," said Payne.

"When I spoke to the Dorchester recently they said that a lot of events aren’t selling this year as people cut back. There we are sitting with a full house and a waiting list, it’s amazing. It's very humbling and a mark of what people thought of the man."

The continued success of the awards lunch, along with a sizeable bequest from O'Sullevan himself, have greatly enlarged the trust's financial resources, allowing the board to consider applications from outside the original six beneficiaries.

Payne said: "We've two very simple criteria: one, would Peter have liked this, and two, can we get some sort of legacy to his name. We want him to be remembered."

It is in this spirit O'Sullevan has been commemorated in a variety of projects, from a community hub for disabled and disadvantaged children at Aintree to a high dependency unit for sick horses at the Racehorse Sanctuary and the outdoor arena and viewing platform at Newmarket's Palace House. 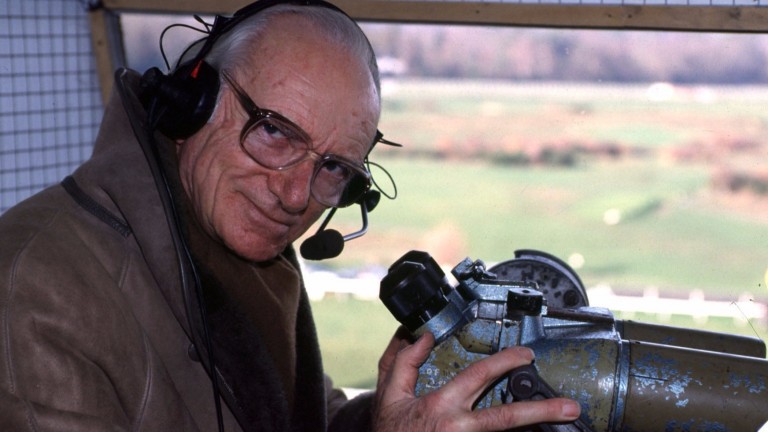 Sir Peter O’Sullevan in classic commentary pose
Unknown
Future projects include a five-year commitment to support the Lambourn Open Day, as well as sponsoring the hugely popular Retraining of Racehorses parades at the big festival meetings.

And perhaps the biggest legacy of all will be the trust's support of the Injured Jockeys Fund in building Peter O'Sullevan House – a rehabilitation centre in the mould of Oaksey House in Lambourn and the Jack Berry House in Middleham – which is due to open its doors in Newmarket in 2019.

FIRST PUBLISHED 6:36PM, NOV 8 2017
We've two very simple criteria: one, would Peter have liked this, and two, can we get some sort of legacy to his name. We want him to be remembered