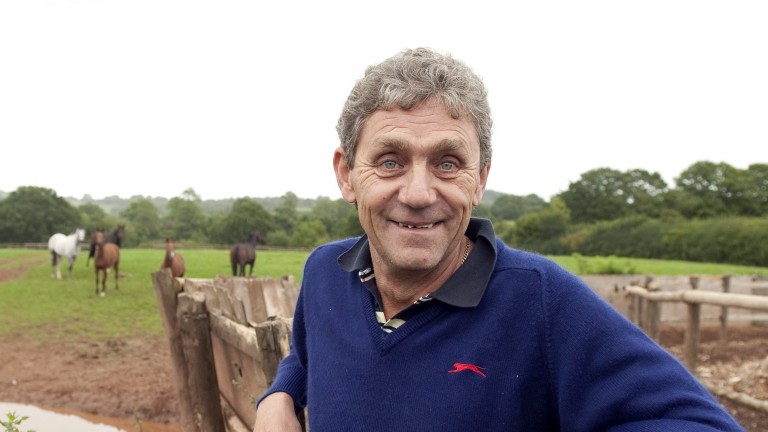 Trainer David Evans at his Ty-Derlwyn Farm stables before he was ill
Edward Whitaker
1 of 1
By Graham Dench 12:20PM, JAN 23 2018

Don't expect to see trainer David Evans celebrating in the bar if he has a winner at Wolverhampton on Monday evening.

In a sport in which alcohol tends to be involved whether one is toasting a winner or drowning one's sorrows, Evans has earned a reputation for enjoying a drink or three, even if many of the stories are no doubt apocryphal.

That, he insists, is all in the past, as he has had a wake-up call and not touched a drop for the best part of two months. He feels all the better for it too.

Explaining what prompted him to sign the pledge, the Abergavenny trainer said on Sunday: "We went to Dubai in November and had a few drinks on the plane home, then I went to Wolverhampton the day after we got back, which was the 29th.

"That night I woke up with a crippling pain in my guts, which had swelled up something rotten. I went into hospital at about 3.30am and I was in there for eight days.

"It turned out I had pancreatitis, which was no laughing matter. I went six days without food, in agony, and for a couple of weeks after I got out of hospital I was as weak as a kitten. I lost a lot of weight, but I feel great now. I'm outside all day, riding out and so on, and everything is good."

'Abstinence is not hard'

Surprisingly perhaps, Evans is not finding maintaining sobriety that difficult, but if he were to be tempted he said he has only to think of the possible consequences.

He said: "Abstinence is not hard, not at the moment anyway. I just have to think about the pain I was in and the warning the doctors gave me, which was that if I had another drink it could kill me.

"I don't mind admitting I was drinking too much. It's that sort of job, and if you aren't careful you can find yourself drinking all day. I wasn't an alcoholic, but it all mounts up.

"I'm fine now and I'm lucky to have been given a warning like that. I could have been dead."

Ironically, Evans' three runners on Monday include one who runs in the name of a pub, as Lastoneforthecraic (4.20) races for The Dukes Head. This, however, is one pub he has never visited.

Not too much is expected of Lastoneforthecraic, but the stable's other runners have possibilities.

Evans reckons Sonnetist (5.50) has a great chance and said: "I thought he was unlucky last time at Kempton and I think he can win."

He is less confident about Essenaitch (7.20), who returns from a setback and ideally wants further, but says that he is "fit enough".

FIRST PUBLISHED 5:13PM, JAN 21 2018
Abstinence is not hard, not at the moment anyway. I just have to think about the pain I was in and the warning the doctors gave me