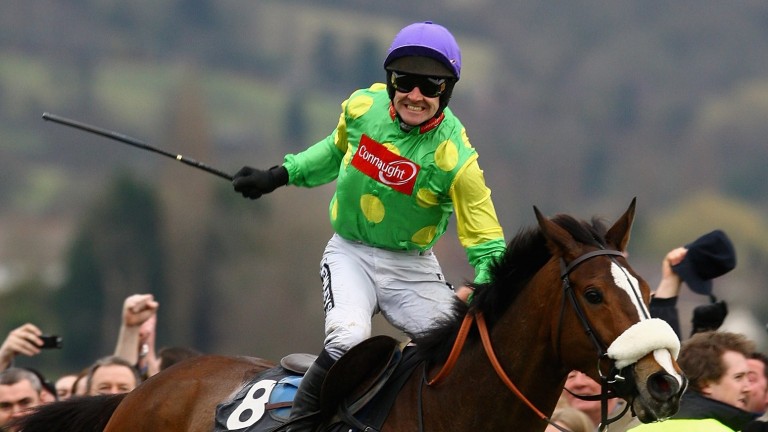 Ruby Walsh celebrates winning the Cheltenham Gold Cup for a second time on Kauto Star in 2009
Julian Finney
1 of 1
UPDATED 7:20PM, MAY 2 2019

A pairing that really doesn't need an introduction. Every top-class jockey needs a top-class horse and in Ruby Walsh's case, Kauto Star came along at the perfect time. The pair were made for each other in every way, they both oozed class and through Kauto Star, Walsh endured both ups and downs. The Paul Nicholls-trained chaser was prone to the odd shuddering mistake and his speed had to be contained over three miles, but Walsh managed him superbly. The pair garnered five King Georges, four Betfair Chases, two Gold Cups and two Tingle Creeks together and introduced racing to a whole new legion of fans.

Sam Thomas had his big moments on Denman, including his phenomenal Gold Cup success, but Walsh was in the saddle for several major wins accrued by "The Tank". Walsh partnered Denman for his ten-length RSA Chase victory and he was also in the saddle when the popular staying chaser won the Lexus at Leopardstown. However, Walsh's biggest success on Denman is unquestionably his second Hennessy Gold Cup, when gamely giving more than a stone in weight to all who dared challenge. 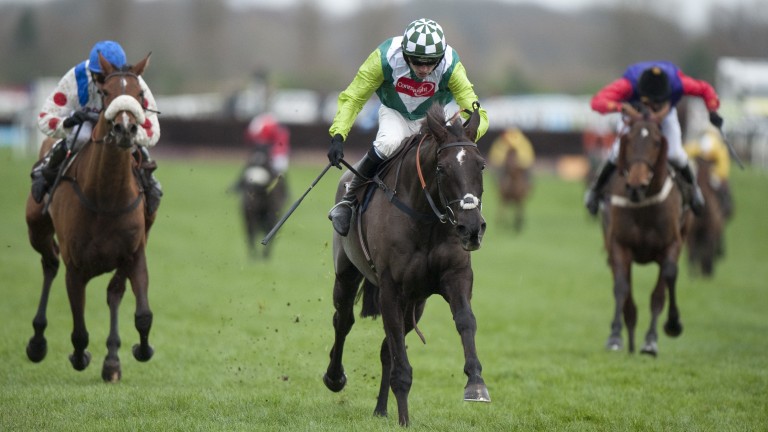 Ruby Walsh is the leading jockey in the history of the Stayers' Hurdle at Cheltenham and Big Buck's has played a huge part. Walsh partnered the strongest of staying hurdlers to four consecutive victories between 2009 and 2012, and such was the dominance of the partnership, Big Buck's was an odds-on favourite for the last three of the quartet. Even away from Cheltenham the duo were peerless, with Big Buck's racking up 18 wins in a row, a streak only surpassed by Altior recently, with Walsh on board for all but two victories in the streak. 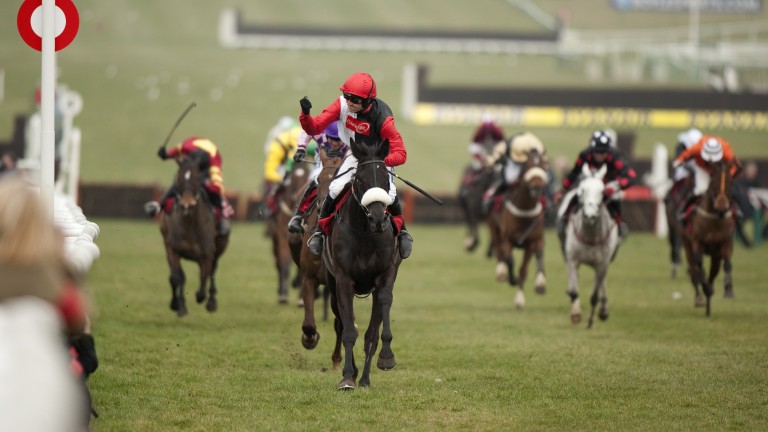 Walsh and Hurricane Fly were the dominant duo of the hurdling division for seven years, progressing from a smart novice to an unstoppable force over two-miles. A winner of the Champion Hurdle in 2011 and 2013, and a 22-time Grade 1 champion, he was undoubtedly one of the best in history.

Trained by his father, Ted, Papillon rocketed Walsh into the public consciousness with their success in the Grand National of 2000. A very public gamble on the nine-year-old, backed into 10-1 from 25-1, was landed by a length and a quarter from Mely Moss.

His second Grand National winner at Aintree when the Willie Mullins-trained chaser won the 2005 race from Royal Auclair. Walsh only rode him to win one other race, his maiden hurdle three years earlier. 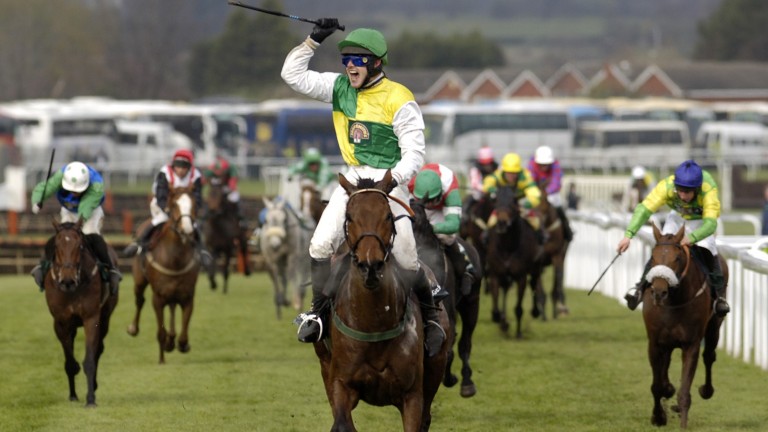 Second time's a charm... Hedgehunter and Ruby Walsh power away from their rivals at the end of the 2005 Grand National
Edward Whitaker

The chaser who started the new millennium with a fanfare for the Walsh family. The then seven-year-old elevated the young Walsh to star status in the month of April. After being brought down in the Arkle when well beaten at Cheltenham in March, Commanche Court won the Irish Grand National the following month just 16 days after Walsh had won the Grand National at Aintree on Papillon. Nine days later Walsh added the Grade 1 Punchestown Gold Cup on Commanche Court, just 11 days before his 21st birthday. They went on to finish second to Best Mate in the 2002 Cheltenham Gold Cup.

Quevega had everything you would ever want in a racehorse. Class, consistency and a warrior-like attitude. Walsh and Quevega enjoyed six consecutive wins in the Mares' Hurdle, between 2009 and 2014, in a career which saw her win 16 times from 24 starts. She was the ultimate mare. 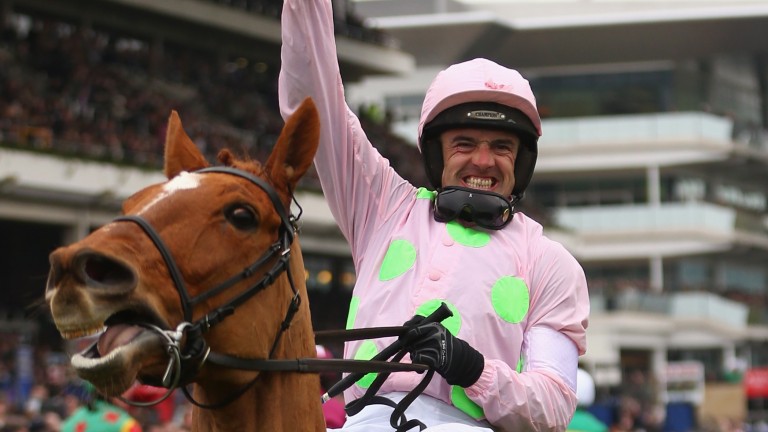 She might be best remembered for 'that fall' in the 2015, but Annie Power was one of the greatest mares of recent years. After departing with Walsh in the Mares' Hurdle when well clear of the field, she returned to the scene of the fall with an emotional win in the 2016 Champion Hurdle at Cheltenham. She followed up at Aintree, destroying a quality field by 18 lengths before beginning a new career as a broodmare.

Ruby Walsh's first Grade 1 winner and the first of his 59 Cheltenham Festival winners. Success in the 1998 Champion Bumper came when Walsh was still an amateur rider and they went on to win the Royal Bond the following season giving his rider a first Grade 1 in his professional career. Walsh said: "I was so young back then but you never forget your first and he was a wonderful horse for my career." 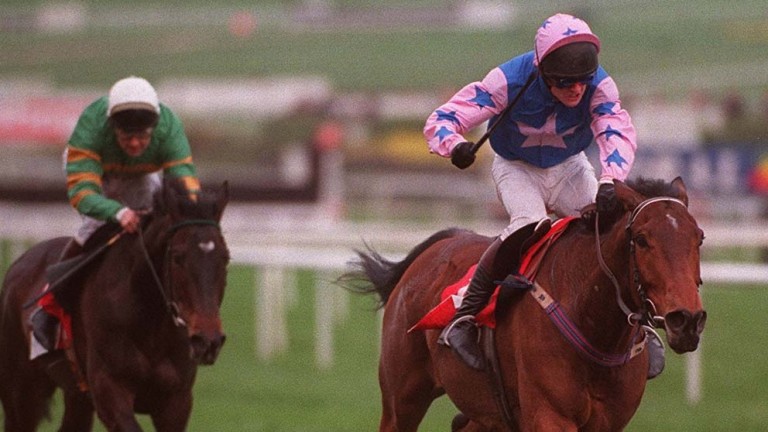 Another horse trained by his father around the start of the 21st century and who helped Ruby establish himself and showcase his talents with a success in Britain. They won seven races together, including the Pillar Property Chase at Cheltenham's January meeting in 2002. Their most prestigious win came in Grade 1 Power Gold Cup at Fairyhouse in 1999 but also included one of the two Ericsson Chases Rince Ri won when beaten Dorans Pride in 2000.

When Walsh took the job with the ambitious Paul Nicholls to cross the Irish Sea in 2002, this two-mile champion chaser helped make it a success from the start. They won their first four chases together, culminating in the 2003 Arkle at Cheltenham. They went on to win the Champion Chase the following year as well as two Game Spirits and a Haldon Gold Cup.

FIRST PUBLISHED 7:29PM, MAY 1 2019
Every top-class jockey needs a top-class horse and in Ruby Walsh's case, Kauto Star came along at the perfect time