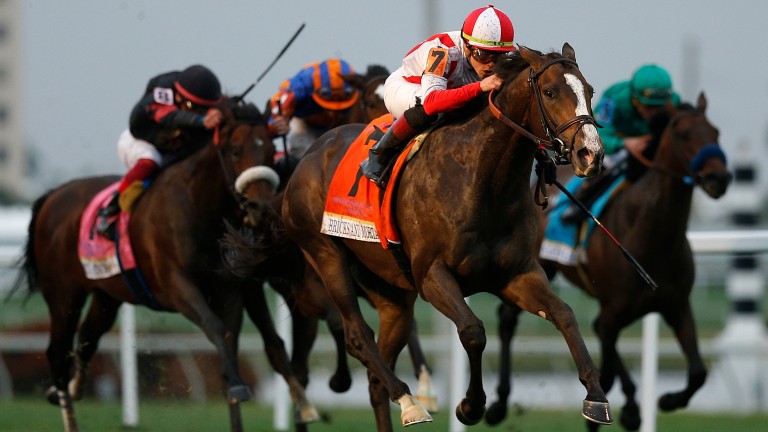 Bricks And Mortar leads them home in the 2019 Pegasus World Cup Turf race, in which the Aidan O'Brien-trained Magic Wand (orange and blue cap) was second
Getty Images/ Michael Reaves
1 of 1
By Andrew Scutts UPDATED 11:02AM, SEP 6 2019

The 2020 Super Bowl will have the field to itself in Miami after it was revealed that the Pegasus World Cup would not be moved back a week to create a spectacular sporting weekend.

It also revealed that there would, as this year, be a dirt race worth $9 million and a turf contest worth $7m.

Next year will see the fourth running of the Pegasus World Cup dirt race and the second renewal of the turf contest.

The dirt race was worth $12m in its inaugural year, while last year it was the richest race on the planet when run for $16m. However, the Dubai World Cup regained the richest race crown this year when the organisers of the Gulfstream Park event opted to add a turf race and split the prize-money.

The new Saudi Cup, at $20m, is set to become the world's most valuable prize when run for the first time in Riyadh in February.

The Aidan O'Brien-trained Magic Wand finished a close second to Bricks And Mortar in the inaugural Pegasus World Cup turf race this year, the winner being a possible opponent for Enable in the Breeders' Cup Turf at Santa Anita in November.

Bricks And Mortar, however, is also vying for favouritism in the Mile with the O'Brien-trained Circus Maximus.

FIRST PUBLISHED 10:48AM, SEP 6 2019
Holding the Pegasus World Cup on Saturday, February 1, the day before the Super Bowl, had been under consideration