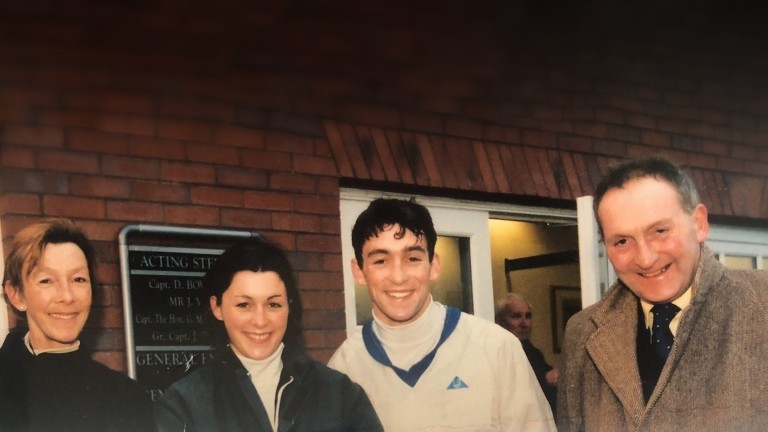 Johnny Bradburne, one of Scotland's most popular amateur riders who rode up to the age of 49, has died aged 74.

He ended a long career as an amateur jockey in 1995, having ridden more than 100 winners on the racecourse and in point-to-points. He made regular appearances at Scottish racecourses when taking days off from his job as a chartered surveyor.

Bradburne enjoyed many big days at Ayr with General Chandos and rode 200-1 shot Off The Bru to finish third in the 1992 Scottish National.

He played a key role in training with his wife Sue, who took out her licence in 1988. She died at the age of 70 last year.

Bradburne's passion for racing has been passed down a generation with his two children both having successful careers in the sport. His daughter Lorna Fowler is a trainer in Ireland while Mark Bradburne enjoyed a successful career as a jockey. The Cheltenham Festival winner no longer rides but remains involved in the sport as a jockey coach.

'He was always the most incredible optimist'

Fowler said: "My father was the epitome of corinthian spirit. He enjoyed his best riding days in his 40s, which is extraordinary, and he and my mother [Sue] were an amazing team – with her training and him riding.

"He was always the most incredible optimist. He'd set himself ambitious tasks but he'd do everything to achieve them. He defied the odds on so many things and that was him all over.

"As a family with the horses we enjoyed some amazing times, especially from General Chandos when it all started. He rode Interim Lib in the Grand National which never was [1993]. When he stopped riding he was fully involved at the yard.

"We were very close as a family and had the interest in racing which really binded us. It's testament to him and Mum that Mark and I work in racing. We were very lucky as a family.

"He loved his racing, he was at his best commentating on the jockeys riding in races. A few of them would get it in the neck."

Fowler also recalled a race from 1994 where three of the Bradburne family competed against each other. It was Johnny who defeated his two children in an amateur riders' race at Ayr, all runners trained by Sue Bradburne.

She added: "My father, Mark and I once rode in a bumper at Ayr – I think it was the only time we all rode against each other. There were only six in the race and we finished in the last three, but Dad got the better of us."

FIRST PUBLISHED 2:34PM, MAY 2 2020
He'd set himself ambitious tasks but he'd do everything to achieve them. He defied the odds on so many things and that was him all over