One last time: Luca Cumani sends out his final runner on Thursday 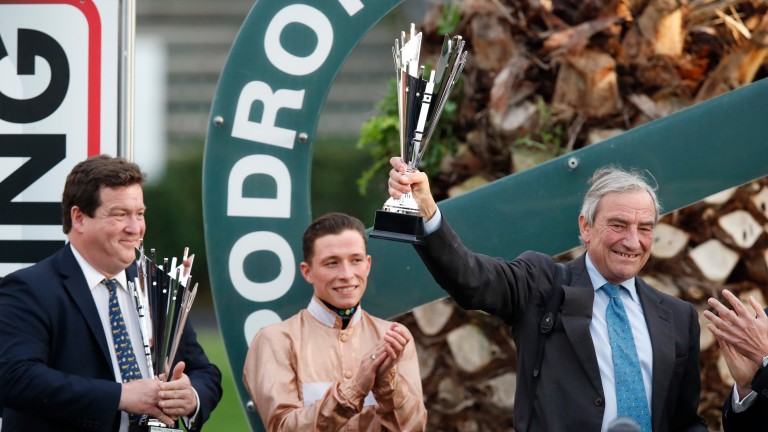 Legendary trainer Luca Cumani will saddle the final runner of his illustrious career on Thursday when Swansdown makes her handicap debut in the 1m1½f nursery handicap (5.30) at Wolverhampton.

Cumani, who announced his intention to end his 43-year training career last month, said on Wednesday: "I'm stepping down on December 1 so this will be my final runner."

He added: "It’s difficult to really tell exactly what sort of chance Swansdown has got. It's her first run in a handicap and it looks an easier race than running those novices she ran in, but all we’ve learned about her up until this point is that she’s not good enough to win one of those."

Cumani played down suggestions he had planned to go out on a high, joking: "I have had had over 2,000 winners in my career and although a winner tomorrow would be lovely, I’m not sure one more will make an awful lot of difference."

The 69-year-old has trained 45 Group 1 winners, with his most recent win at the top level coming this month when God Given recorded a memorable victory in the Premio Lydia Tesio Sisal Matchpoint at Capannelle in his native Italy.

"The win in Italy three weeks ago was a fantastic result, everyone in the yard was very emotional – there were tears all round," Cumani added.

"We won our first Group 1 with Old Country in the 1982 Italian Derby, so to win at Capannelle with God Given means we have created some sort of strange symmetry between those two victories."

Celebrated as one of the finest trainers of his generation, Cumani is proud of Bedford House, his Newmarket stable, and of the staff that have assisted him throughout his career.

He said: "Everything in the yard has remained excellent right up to the end. As far as I’m concerned the staff I have here are second to none and that’s been shown by how keen other trainers have been to employ them and how easy it’s been for more or less all of them to find jobs after I step down."

He added: "There’s been a lot of interest in the stable. It’s a trophy asset in that it’s arguably the best in Newmarket from a geographical and architectural point of view."

Expert view: Cumani has a good chance of farewell success

How great would it be for legendary trainer Luca Cumani to end his career with a winner?

Swansdown, who runs in the opening 1m1f nursery at Wolverhampton on Thursday, is set to be his last runner before he hands over his licence.

An expensive Dubawi filly, Swansdown has been given a typically gentle introduction by Cumani, competing in three maidens over an inadequate 7f (twice) and a mile. It's unsurprising she was unable to get involved at the business end in those contests, but she should rate a different proposition now stepped up in trip and in nursery company.

Not only that, but she has been awarded an opening handicap mark of 63, which could see her extremely well treated – a theory that is backed up by her pedigree (half-sister to 98 and 94-rated runners, also trained by Cumani).

It looks far from the best nursery you will ever see, he booking of Oisin Murphy is interesting and providing Swansdown can get some cover from stall nine, Cumani could go out on a high note.
Tom Collins

FIRST PUBLISHED 5:10PM, NOV 21 2018
The win in Italy three weeks ago was a fantastic result, everyone in the yard was very emotional