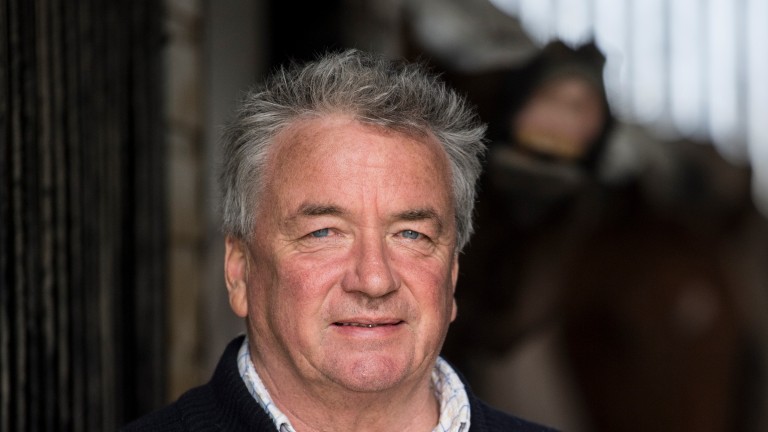 Nigel Twiston-Davies: "They get sick, but not that sick ? just a snotty nose and temperature"
Edward Whitaker
1 of 1
By Graham Dench UPDATED 9:40AM, FEB 9 2019

Nigel Twiston-Davies believes the rigorous measures put in place by the BHA to contain equine influenza are "a massive overreaction".

The Grand National- and Gold Cup-winning trainer, who had a runner at Ludlow on Wednesday and so is among those who has had to have all his horses tested, described the BHA mandate as "a total knee-jerk reaction" and suggested the authority may find it has "opened a can of worms".

He said: "It's a massive overreaction. All horses are vaccinated, and so when they do get it, it's not really anything to worry about. They get sick, but not that sick – just a snotty nose and temperature.

"I should think every trainer in the country has a horse with a snotty nose, and what you do is take blood tests, take tracheal washes and take their temperature, and if they're clear they're all right.

"Flu is endemic in the whole horse population and what I think the BHA will find is that they've opened a can of worms and that every trainer has two or three.

"We all have bugs and treat them as they come. It's rife everywhere, but not fatal. It's not like herpes or strangles, which are a disaster. This is far from a disaster because we're all vaccinated. It's a total knee-jerk reaction."

While the majority in the racing industry have so far supported the BHA's swift and firm handling of the situation, prominent Newmarket equine vet Pete Ramzan is another who believes its measures are disproportionate to the threat the disease poses and reckons that if a new strain of flu is out there, then it will happen regardless, but that it will pass, as it has in previous instances.

Ramzan, a partner in the Rossdales veterinary practice and awarded Fellowship of the Royal College of Veterinary Surgeons last year, said: "I think it’s fair to say that for the time being vets and trainers are happy to go along with these measures, but I can't quite see where they're leading. To some degree it looks an overreaction and isn't necessarily justified by the circumstances, given flu is endemic in the UK.

"The BHA takes advice from experts, but as a clinician at the coalface, dealing with respiratory disease on a daily basis in racing yards, it seems as if the measures put in place do not match the threat to British racehorses or racing.

"If a new strain of flu is going to break through the excellent vaccination protocols already in use in most yards, history tells us it will happen regardless of these measures, as flu is far less containable than other more serious diseases like strangles or neurological herpes virus."

Ramzan, whose book 'The Racehorse: A Veterinary Manual' is said to be the first comprehensive textbook wholly dedicated to veterinary management of the racehorse, added: "The UK thoroughbred population is probably one of the best vaccinated group of animals on the planet, but just as in people we should expect ‘bad’ flu years from time to time, and we're probably overdue one. Perhaps we're on the cusp of just such a year, although this is by no means certain at this early stage.

"If so, we can expect some poor-performing yards and more respiratory disease than usual, but as with previous episodes it will pass, vaccines will get updated and we’ll then have another extended period of relative health in the population.

"I can understand a degree of nervousness on the part of the regulator, who have to be seen to be doing the right thing, and it's understandable it wishes to find out more, but this can be achieved through surveillance swabbing without mandating a shutdown of racing or of individual yards.

"Trainers by and large use their common sense and nobody chooses to send sick horses to the races."

Responding to the comments, BHA head of media Robin Mounsey said: "Equine influenza is a highly infectious disease. It's the most potentially damaging of the respiratory viruses that occur in UK equines.

"The decision to suspend racing has been supported by government, the National Trainers Federation and Animal Health Trust, and has the unanimous support of the BHA’s industry veterinary committee."

A tweet by the NTF read: "Today's news shows @BHAPressOffice policy was the right initial response, which we support. No point in taking risks with the health of the horse population before the full picture is understood."

Some have questioned why a lockdown has been ordered in this instance when racing was allowed to continue in 2003 despite 1,300 horses in the Newmarket area contracting equine influenza.

Mounsey said: "Our understanding is that it was the fact it was confined to one specific region that meant racing could continue."

FIRST PUBLISHED 6:48PM, FEB 8 2019
It's not like herpes or strangles, which are a disaster. This is far from a disaster because we are all vaccinated