Gold Cup hero Sizing John will not travel to Kempton 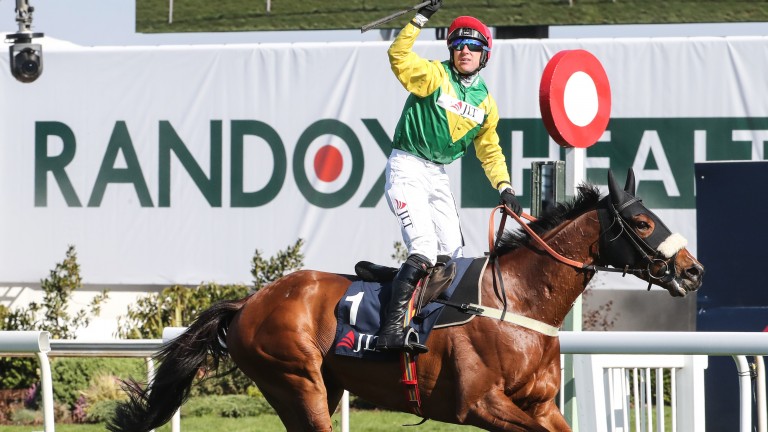 Team Tizzard, who have won the last two runnings of the King George VI Chase with Cue Card and Thistlecrack, are set to launch the popular pair at the Christmas showpiece – and it is a serious possibility stablemate Fox Norton will join them after Sizing John was on Tuesday ruled out.

The Cheltenham Gold Cup hero could, however, run in the Leopardstown Christmas Chase.

The general 5-1 third-favourite for the Kempton highlight, Sizing John was discounted for the 32Red-sponsored contest by trainer Jessica Harrington on Tuesday when it emerged the Colin Tizzard-trained Fox Norton, a staying-on second in Saturday's Tingle Creek at Sandown, could carry the Sizing John colours of late owner Alan Potts.

Successful in the Melling Chase over two and a half miles and over two miles in Punchestown's Champion Chase in the spring, Fox Norton is now vying with Thistlecrack to be the yard's principal King George hope.

Tizzard's son and assistant Joe said: "It was the wish of Alan's to keep Sizing John and Fox Norton apart, but that was when they were going to have a crack at the £1 million bonus with Sizing John.

"Now that's changed Fox Norton will be left in at the five-day stage. He's come out of the Tingle Creek very well and his best form last year was probably over two and a half miles, so I think the King George would have been a target had Sizing John not been owned by the same person. It's a big possibility he'll be there."

Fox Norton is a general 7-1 for the King George with last year's winner Thistlecrack available at 6-1.

Thistlecrack failed to fire in the Long Distance Hurdle at Newbury on his comeback from a tendon injury this month, but connections are convinced improvement will be forthcoming.

"Thistlecrack is good," Tizzard added. "He's come out of his run at Newbury really well. He ran on the Friday and was back galloping Monday morning.

"We think it was just down to lack of fitness. We found the injury mid-February and he was in his box for two months, in the field for four months, walked for two months, cantered for two and galloped for a month, so although I put my neck on the line and said he was fit I don't think he was.

"He looks a lot tighter at home and I'm sure he's fitter. We're confident you'll see a fitter horse at Kempton.

"It's not a few years ago, it was 12 months ago [that he was brilliant in the King George].

Last, but not least in the public's affections, comes Cue Card, the 2015 King George hero who is a 33-1 chance, having suffered a heavy defeat in the Betfair Chase at Haydock on his most recent appearance.

Tizzard, who joked "if you throw enough mud some might stick", said: "We made an entry this morning for the rearranged Peterborough Chase, but I'm not sure two miles five around Taunton would be ideal for him; whether he'd be quick enough for it.

"I think Mrs [Jean] Bishop is keen to go for another crack at the King George, he's in good form and I think it's most likely he'll turn up in it.

"Two of them have won it before, and if Thistlecrack gets back to his form from last year he'd be very exciting, but there wouldn't be much between him and Fox Norton."

Even though Sizing John will not undertake a trip to Britain this month, Harrington said: "He seems fresh in himself. If he runs anywhere over Christmas it will be at Leopardstown in what was the Lexus Chase.

"It's only 16 days from his last run until the King George. With the travelling and everything else, I'd rather like to leave taking on the home horses on their own territory until March.

"I'm just going to wait and see how he is. He was grand this morning, but we'll probably make a decision next week as to whether he runs at Christmas. At least I get a couple of days extra and we don't have to travel; that's a plus."

'I couldn't back disappointing Thistlecrack for anything'

FIRST PUBLISHED 1:27PM, DEC 12 2017
Fox Norton will be left in at the five-day stage. He's come out of the Tingle Creek very well. It's a big possibility he'll be there