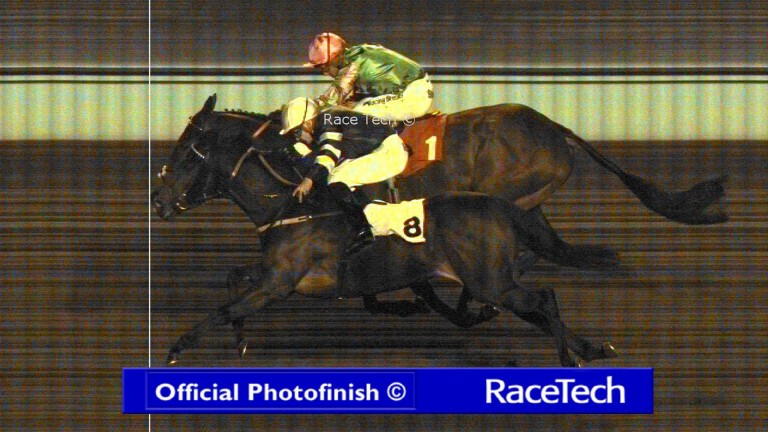 Oregon Gift (far side) was incorrectly called the runner-up in a photo-finish. He has since been awarded the race
RaceTech
1 of 1
By Richard Birch UPDATED 8:10PM, MAR 28 2018

Punters have been left out of pocket after an odds-on winner at Kempton last Friday night was mistakenly called a loser in another episode that shows racing in a poor light.

Oregon Gift, sent off a heavily backed 10-11 favourite for division one of the Racing UK Profits Returned To Racing Handicap, officially went down by a nose to 8-1 shot Bird For Life after hitting an in-running low of 1.1 on Betfair.

However, the places were amended on Wednesday following further consideration of the photo-finish by the judge Felix Wheeler.

The British Horseracing Authority has pledged to take steps to minimise the chance of a recurrence, but that will come as little consolation to those who backed Oregon Gift or to the connections of Bird For Life.

Oregon Gift, who was carrying a 6lb penalty after winning easily at Wolverhampton 24 hours earlier, would have been a banker for many punters in multiples as well as single bets. However, as per the Tattersalls rules of betting, the original result stands.

Paul Binfield, spokesman for Paddy Power, said: “It’s very unfortunate that in 2018 with all the technology available to the authorities this sort of thing is still happening.”

Mark Usher, who trains Bird For Life, said: “It’s very disappointing. The judge seems to have made a mistake and we accept that. A judge is a human being and we can all make mistakes.

“There is nothing we can do about it. Unfortunately, Bird For Life went up 4lb for winning, whereas I'm sure she would only have gone up 1lb for being beaten a nose. That means, in the short term at least, she will be 3lb ‘wrong’ in future races.

“I’m disappointed with the way it’s all been handled by the BHA – it’s been a case of like it or lump it as far as they are concerned – but we’ve got to move on.”

The handicapper subsequently reassessed Bird For Life's mark so she is now 3lb higher than at Kempton.

Mark Usher: “I’m disappointed with the way it’s all been handled by the BHA"
Martin Lynch

Charlie Mann, who now has an extra winner owing to Oregon Gift’s promotion, said: “When the BHA rang me I thought I was in trouble again! I was delighted it was good news.

“We didn’t complain at the time. I don’t like taking races off other people – and Mark is a good friend of mine – but it’s nice for Oregon Gift and his owners.”

The BHA will provide further support for judges by ensuring that all photo-finish decisions are available for review by a BHA official before the ‘weighed in’ is announced, meaning there is a second check before betting is settled. This will be implemented upon confirmation that the required technical aspects are in place to facilitate the process of a cross check.

Brant Dunshea, director of integrity and raceday operations for the BHA, said: “Clearly the whole team is disappointed to have to correct any race result after the day. It's important that these results are called accurately.

“While it's appropriate that our processes allow us to put this right financially by the owner of the winning horse, we're aware that the betting public are significantly affected by issues such as this owing to the fact that the rules of betting mean the result called on the day stands for betting purposes. We apologise to everyone affected.

“Tight photo-finish calls can often be misleading at first glance and present a challenge on racedays when there is a time pressure. Our judges do a fantastic job, using all of their experience to call the results of these difficult photos accurately and in a timely manner an overwhelming majority of the time.

“However, in order to ensure that our judges are getting all of the support they need, I'm determined that we take positive steps, both in the short term and through the stewarding review, to ensure there are extra checks and balances as part of this process before the ‘weighed in’ announcement is made and bets are settled.”

Bookmakers divided on whether to pay out on Lingfield judge's error

FIRST PUBLISHED 4:28PM, MAR 28 2018
We're aware the betting public are significantly affected because the rules of betting mean the result called on the day stands for betting purposes