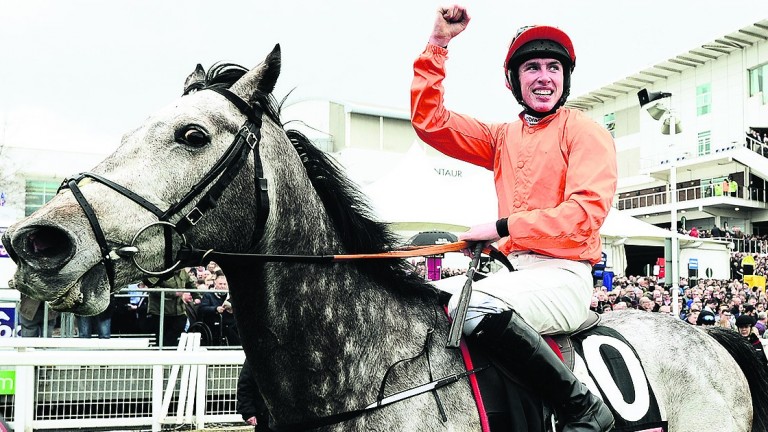 Jack Kennedy celebrates on Labaik after winning the Supreme Novices' Hurdle at Cheltenham
Harry Trump
1 of 1
By Richard Forristal 7:18AM, JUN 17 2017

The recalcitrant Supreme Novices’ Hurdle winner Labaik is the subject of a High Court order as a result of an application by the Criminal Assets Bureau under the proceeds of crime act to seize valuable possessions belonging to convicted drug dealer John Boylan.

Gordon Elliott’s Cheltenham Festival winner has been sidelined since sustaining a leg injury at the Punchestown festival and the County Meath handler has indicated he will not be fit to return to the track until 2018 at the earliest.

However, official confirmation that one of Labaik’s connections is suspected of having links with an organised crime gang whose activities involve drug trafficking makes the six-year-old’s future even more uncertain.

Boylan is not, and has never been, formally registered as one of Labaik’s owners, but he was pictured celebrating with the winning team at Cheltenham and was also previously photographed with connections after Labaik won a charity race at Leopardstown last autumn.

There is no suggestion anyone else linked with the horse is involved in criminality of any form, but Boylan, a native of Lucan in County Dublin, who is also known as John Power, is suspected of being a member of a west Dublin gang.

His CAB case last came up for mention in the High Court on May 22, when his legal counsel pledged to provide an affidavit as to his means of purchasing Labaik, who was acquired at Goffs UK August sale last year for £25,000.

It follows an April 2 CAB raid, which was backed up by a number of garda units, on a dozen properties in which a €30,000 Mercedes, financial documentation and computers were seized, along with a small quantity of drugs and drugs paraphernalia.

The operation is codenamed Lapphund, and Labaik’s passport was also handed over as part of the investigation. Boylan’s case is again up for mention in the High Court on Monday.

The grey last ran when finishing fourth in Punchestown’s Grade 1 Champion Hurdle, having resorted to old habits when effectively refusing to race in the novices’ equivalent three days earlier.

Before that he had enjoyed his finest hour at Cheltenham, landing some sizeable bets in recording a surprise 25-1 win in the festival’s curtain-raiser. He was subsequently entered for Goffs Aintree sale but was withdrawn.

FIRST PUBLISHED 7:18AM, JUN 17 2017
There is no suggestion that anyone else linked with the horse is involved in criminality of any form, but Boylan is suspected of being a gang member