Warning: contains a graphic image some readers may find upsetting 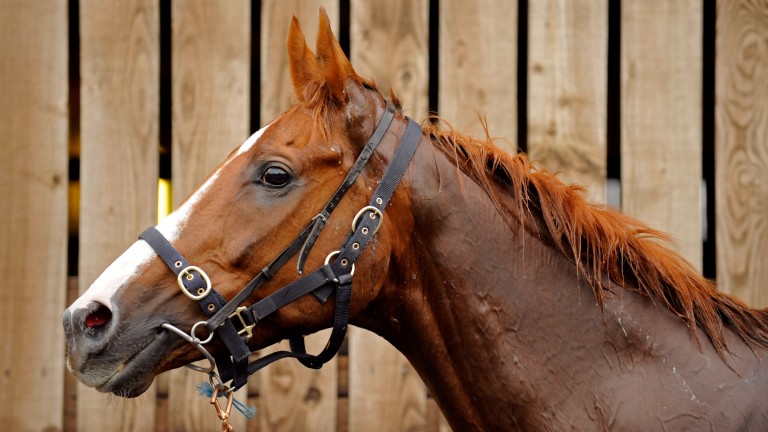 The stable that fairytale Welsh Grand National winner Dream Alliance grew up in has been burnt to the ground in an apparent arson attack, killing a two-year-old and badly burning a mare on Sunday morning.

The stable at Cefn Fforest, Blackwood in south Wales, owned by Brian and Jan Vokes, who bred Dream Alliance, was set alight around 6.30am on Sunday morning.

The fire brigade, called by neighbours within minutes, found two-year-old Impossible Dream burnt to death in the stable but the mare, Juwireya, had broken out of the back.

Jan Vokes said: "She was found in the village, badly burned on her head, neck, back and sides with her eye swollen out.

"She is with the vets now but we don't know whether she will survive and all hopes of breeding from her one last time before we retire have gone." 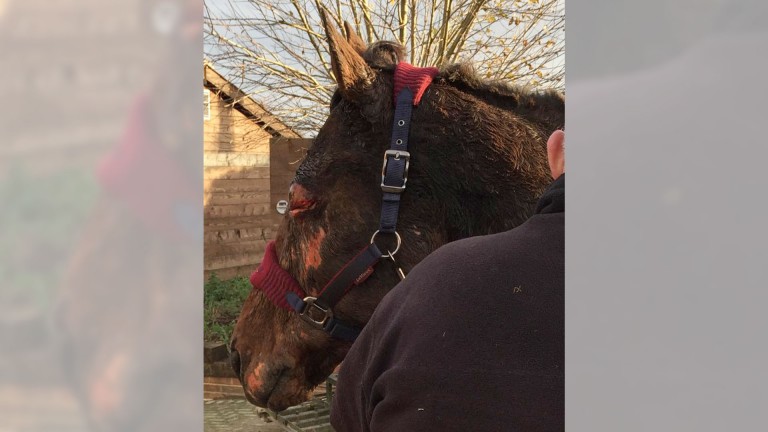 The badly burned Juwireya, who escaped the blaze

Impossible Dream, whose pet name was Rodders, was the one the Vokes hoped would be the young horse mentioned at the end of the documentary Dark Horse: The Incredible True Story of Dream Alliance.

Vokes added: "It ended with mention that the story was not finished and there could still be a Grand National winner and Impossible Dream was what we hoped would be that horse.

"It is devastating as he had just come back in from summer grass in Abergavenny and was going into pre-training and then to Philip Hobbs, who trained Dream Alliance to his big win."

Juwireya, bred by Shadwell Stud, had won a hurdle at Stratford in August 2016 after a Flat win at Southwell and Vokes had hoped to put her in foal next year.

Vokes wrote on her Facebook page: "Some scum set our stables on fire around 6.30am, killing our beautiful gelding Rodders and our beautiful mare is badly burnt. There is a cash reward for any information leading to an arrest. Contact Janet Vokes on 07934557354"

Police scene of crimes investigators attended after the fire brigade and Vokes added: "They say it was deliberate. Someone had to scale a six-foot fence and there is no electricity or hay bales at the stable."

Few racing stories have more accurately embodied the phrase 'rags to riches' than Welsh National winner Dream Alliance, who was reared on a slag-heap allotment in the poor mining village of Cefn Fforest.

Jan Vokes had no experience of racing before breeding Dream Alliance but formed a 23-strong syndicate at the local working men's club, where she worked as a barmaid, with each member paying £10 a week.

Born in 2001, Dream Alliance spent the first 12 months on Vokes's allotment before moving to Hobbs's yard aged three. He proved a hit on the track, winning three races in 2006 and finishing second behind Denman in the 2007 Hennessy.

The following year Dream Alliance ran in a hurdle race at the Grand National festival and suffered what could have been a fatal injury when a rear hoof cut through the back of a front leg and sliced a tendon.

The syndicate voted unanimously to spend £20,000 on stem-cell surgery to help the leg recover, although a return to racing was extremely unlikely regardless.

Remarkably, Dream Alliance made it back to the track and achieved his crowning glory on December 28, 2009, when he stormed to victory at odds of 20-1 in the Welsh National at Chepstow, on just his second run back from injury.

Part-owner Maldwyn Thomas summed it up best: "He was bred in Cefn Fforest and born on the top of a flattened coal tip in an old mining colliery. He came into the world overlooking the valleys and spent his first 12 months in a tin shed. Now he's won the Welsh National!"

Is the buzz merited? Our analysts give their verdict on much-hyped Samcro

100 not out: Josephine Gordon hopes milestone winner will inspire girls

Got two minutes? Take our quiz to be in with a chance of winning Newbury tickets

FIRST PUBLISHED 4:05PM, NOV 26 2017
She was found in the village, badly burned on her head, neck, back and sides with her eye swollen out