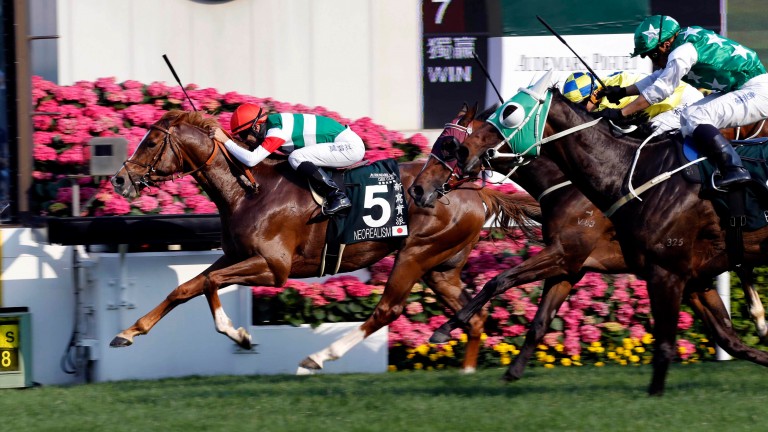 A masterclass in riding tactics by Hong Kong champion jockey Joao Moreira and Japanese grit landed Neorealism victory in the Audemars Piguet QEII Cup, banishing memories of a disappointing effort over course and distance in December.

Winning trainer Noriyuki Hori reckoned Neorealism had learned from the experience of his initial overseas foray as he sought his first win in Group 1 company, but Moreira's enterprise on his first ride aboard the six-year-old was the deciding factor.

Hooded in the parade, on his toes at the start and more slowly away from the gate than was intended, Neorealism was settled in sixth place on the rails as The United States set a pedestrian pace, before Moreira took matters into his own hands shortly after the halfway mark.

In the space of a few strides he sent Neorealism to the front and after turning into the straight two lengths clear he strode on stoutly to repel the late finish of Pakistan Star, with last year's winner Werther also staying on in the last furlong but a short head down on the runner-up at the line.

The winning time of 2min 04.59sec on good to firm ground was way short of standard and more than four seconds outside the course record.

Moreira, who was winning the race for the first time and registering his fourth victory in a five-timer on the card, said: "I'd had it in mind to lead but unfortunately he didn't jump out well, which probably worked in his favour, because I got him to relax. But down the back straight I had to make the move.

"Mr Hori gave me the freedom to work out the tactics and it worked out perfectly."

Hori, who did not commit to future plans, added: "We had talked about possible patterns of the race beforehand but Joao gave the horse the best ride. Joao rode him in the mornings, so he got to know him well."

Silvestre de Sousa praised Pakistan Star, saying: "They went just too slowly for him in the early stages but he finished off the race well."

Rupert Pritchard-Gordon, racing manager for owner Robert Ng, said: "He likes a bit of cut in the ground but it had dried out and he was hemmed in and done for toe when the pace quickened."

Eagle Way, whose farewell race in Australia last June resulted in a Group 1 win in the Queensland Derby, was a third winner in the first six races for champion jockey Joao Moreira, who took the final turn in eighth place before making his move in one of only handful of 1m4f races staged in Hong Kong.

Once Eagle Way went to the front a furlong and a half out, there was never a doubt that the even-money favourite would be caught, but Helene Charisma and Doug Whyte chased him down to get within three quarters of a length at the post.

Gold Mount, who raced as Primitivo in Britain and was sold to Hong Kong after completing a four-timer for Alan King’s yard in Royal Ascot’s King George V Handicap last summer, stayed on stoutly in the last two furlongs to be beaten a further length and three-quarters into third under Silvestre de Sousa.

FIRST PUBLISHED 11:38AM, APR 30 2017
Mr Hori gave me the freedom to work out the tactics and it worked out perfectly