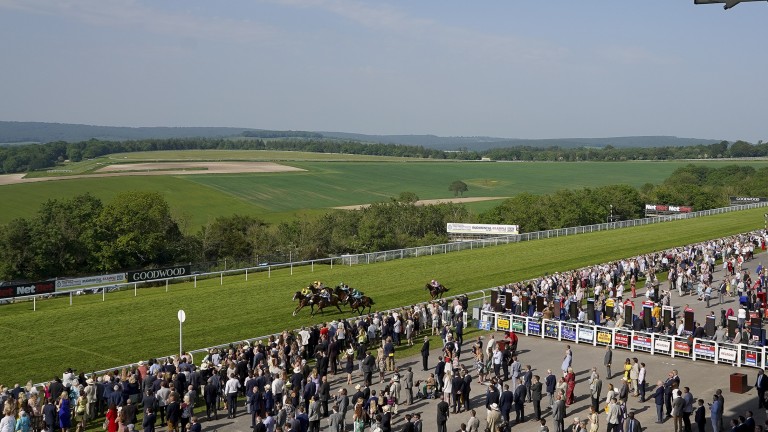 Goodwood: it's all about confidence and sticking to your plan when riding there
Alan Crowhurst
1 of 1
UPDATED 3:26PM, NOV 22 2019

If Royal Ascot is Flat racing's Cheltenham, Glorious Goodwood is our Aintree. It's a meeting I love. We go all year to the Lingfields and Windsors trying to find horses we can take to Goodwood.

What makes it special is that it's very similar to Royal Ascot but you can also ride a winner on a maiden or a 0-80 horse. You don't need a real good horse to get into the winner's enclosure. At Goodwood, you're riding at a festival but you don't need to be on a champion to win.

Goodwood can be a tricky track to ride though. The thing about the place for a jockey is that you have to believe in yourself, even when things aren't going great. You might not get a run on one horse, but you have to have the balls to ride the next race the same way.

At Goodwood, if you try to make the gaps happen, they won't come. If you let them happen, they do come. It's all about confidence and sticking to your plan. What helps is getting a winner early in the week – but that's not easy in races run over 7f and a mile.

How to deal with those 7f and mile races

[Editor's note: in 2011 there was a change to the way the stalls are numbered. It is now an advantage to be drawn low, which is towards the inside on the round course.]

In big fields, it's a huge advantage to be drawn high. So many of the races over these trips have lots of runners and you are bound to be on a few drawn low and therefore wide on the track. At the start of the week you have to make a conscious decision either to push forward or miss the kick and go up the inner.

Personally, I've tried more than enough times to break fast from an outside draw and get over to the rail. What I've learnt is that by doing that you always end up going too quick and use up too much horse too soon in the race. If you drop your horse in, you are giving the others a head start and are always in danger of being blocked in down the straight, but I think it's the chance you have to take.

The problem with a low draw is not just that you are wide. The stalls are positioned at a part of the hill that puts those on the rail higher up than those on the outside. Because of that camber, horses drawn low have to climb much more of the hill than horses drawn on the rail, who pretty much get to run level. As the stalls are, if you like, positioned sideways, a lot of horses also slip coming out of the gates.

If you do happen to try to force it, you might be able to get a breather on the bend. Generally you can't, but even if you can it's dangerous as you end up being swamped from behind. Basically, if you are going to try to make the running you have to do it with conviction, but the danger is that you will be taken on all the way up the straight, and when that happens you can be doomed.

Even in small fields, the mile track can be difficult. Think back a couple of years ago to the Sussex Stakes won by Henrythenavigator. Jimmy Fortune wanted to jump and make it on Raven's Pass, but he couldn't because Aidan O'Brien was running a pacemaker who would have come alongside and set Raven's Pass alight if Jimmy had tried to go on.

Jimmy was also drawn on the rail, so if he kept the rail and followed the pacemaker, Johnny Murtagh could have taken Henrythenavigator to the outside of Raven's Pass and trapped him against the fence. Knowing that, Jimmy had to pull back and follow Johnny, which meant he got second run and finished second.

Doing it differently: the long-distance races

People associate me with holding up horses, but I like making the running as well – I do it every Monday night at Windsor! It's the same at Goodwood in any race over 1m4f-plus when the best place to be from the start is in the first four.

To get into the first four, you have to jump well, and at Goodwood more than anywhere it's very important to jump quick. The start is vital. If you miss the kick you find that the guys who are on the ball have taken all the best positions after 100 yards.

Once you've got your position, you take so many bends at Goodwood that when you're handy you have the luxury of being able to get plenty of breathers into your horse. The first bend is very sharp, so horses pull up at that point.

After that they mosey down the hill before switching over to the other side of the track for the next climb, at the top of which they reach the top bend, around which they slow down to a hack because the corner is so sharp that you wouldn't be able to get around it otherwise.

At this point, even in 1m2f races, you don't mind kicking early if the pace has been really steady. Otherwise, you will often keep a hold of your horse until pushing on at the intersection, around three furlongs out. What you don't want is to be playing catch-up – three lengths can be a lot to find at Goodwood if you're not on a speedy horse. The last thing you want round here is a slow horse. A horse with pace is vital.

And down the straight they come! As you enter the straight, you don't want to be wide, especially in races over 7f or a mile. The home straight rides like a 50p piece. You're always going a little bit right from the moment you turn in, which means that the wider you are, the more ground you cover.

You also find that, as at most right-handed tracks, you get a run on the inside rail more easily than on a left-handed track. Ninety per cent of jockeys are happier carrying their stick in the right hand, so when they get serious and pull their stick through to it, horses, especially tired horses, inevitably shift left off the fence. The openings might come a bit late, but more often than not they will come.

There's something else about riding the Goodwood straight. If they've gone very fast up front, the leaders are going to stop, which creates the danger of you hitting them up the arse. So, if you are coming from off the pace, you are actually better off coming from right out the back.

A lot of people complain about Jamie Spencer and me sitting last, but if you sit last you can see everything that's going on. You can go left, right or straight on. If you happen to be two lengths closer, you will almost certainly be snookered. You won't be able to go left or right as you'll have a horse either side of you and you will possibly have a dud right in front as well. That's why we sit last. It makes sense.

Succeeding on the sprint track

It's very straightforward, but they do go very fast as the hill has an effect. At the bottom of the descent there's still the guts of three furlongs to run on the level. However, running downhill has often made horses race faster than they should have done, which means you tend to see the leaders stopping at the furlong pole and being swamped by runners coming from behind. It's hardest when soft It's a jockeys' nightmare when it goes soft at Goodwood.

If you are making the running, you will want to edge over to the quicker ground on the stands' rail when you swing for home. By rights, it should be you who gets the rail, but if someone kicks up your inner trying to nick it and you tighten them up, the stewards see it differently. That doesn't seem right. If you've done the donkey work and created the racing line, do you then let someone else have the rail?

Not the way I was brought up to ride you don't. It's a big deal, too. The ground at the rail might only be a bit quicker, but the real reason you want it is that it helps on a weary horse. On top of that, if you have horses attacking on either side, you've got to kill two of them off.