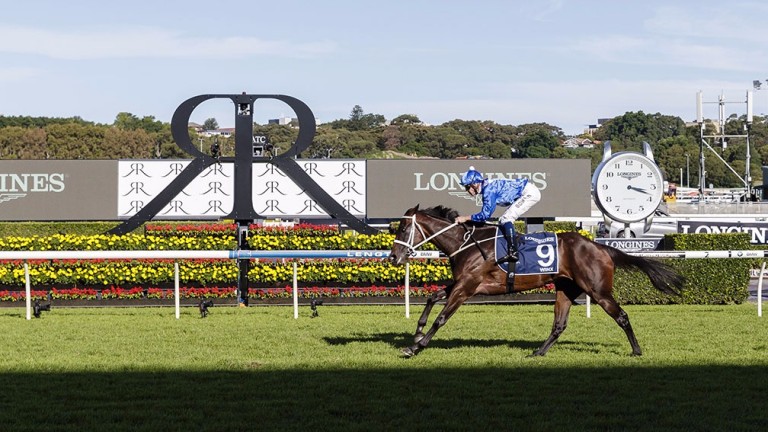 Ascot, York and Leopardstown are among the courses hoping to attract Winx
Getty Images
1 of 1
By Mark Scully UPDATED 1:59PM, SEP 21 2017

The race is on to attract Australia's wondermare to some of the biggest European contests of next summer as one major racecourse after another delivered the same cry, "We want Winx!"

At home Winx mania is reaching fever pitch after the daughter of Street Cry extended her remarkable unbeaten record to 20 races en route to a shot at a historic third Cox Plate.

In a bid to end speculation about her targets both before and after the Moonee Valley feature, trainer Chris Waller on Wednesday released a statement detailing plans, which included a potential three-start European campaign over a variety of distances.

While Waller was keen to stress a final decision on whether Winx heads to Europe will not be finalised until next March, leading figures in Britain, Ireland and France are beginning their campaigns to attract the southern hemisphere champion.

Should Winx make the trip, it seems certain she will head to Royal Ascot, either for a single outing or as the springboard to further targets, and the course's director of racing and communications Nick Smith believes such a bid would see a repeat of the huge global interest generated by Black Caviar's Diamond Jubilee Stakes win in 2012.

"I've been speaking to Chris Waller for over a year and they have long been keen on Royal Ascot," said Smith. "Whether it's the Queen Anne or Prince of Wales's has yet to be confirmed, but it's gratifying to hear the team go more public on that, which shows they're starting to formulate a firmer plan.

"I would imagine we would see a repeat of the kind of crowds we saw in Federation Square in Melbourne watching Black Caviar in the middle of the night.

"Winning at Royal Ascot took Black Caviar's career to another level and I'm sure they'll have Royal Ascot as their first stop. If they decided to carry on and race elsewhere, that would be great, too."

Smith suggested the Juddmonte International at York later in the summer would be a natural target after Royal Ascot should things go well, which is music to the ears of York's head of marketing and sponsorship James Brennan.

The £1 million Ebor festival highlight has at times in recent years been the world's highest-rated race, which makes York believe Winx would be a very appropriate runner.

"Generally, the best horses get to show their best on the Knavesmire," he said. "We're in the business of staging world-class racing for the people of Yorkshire and wider, so a superstar such as Winx would be tremendous to see.

"When Chris Waller is ready to talk, we'd love to engage with him, the other connections and other UK courses to see if a schedule could be put together that suits. It would be a mouthwatering prospect."

Sitting between Ascot and York in the calendar is Sandown's Coral-Eclipse and the sponsor's David Stevens on Wednesday declared: "The campaign to get her in the Coral-Eclipse begins here!"

Coral make Winx a 5-1 shot to win the Sandown feature and Stevens added: "So You Think's victory in 2011 was the closest we've come to an Australian winner of the Coral-Eclipse, and it would be fantastic for the race if Winx lined up at Sandown next summer. If she did, it's unlikely she'd be a 5-1 shot."

Sandown head of racing Andrew Cooper would be equally keen to see Winx head to Esher and said: "Clearly, it's the type of race that should be on their radar if they are considering a summer campaign over here.

"It would be fabulous news if she came and we'll make sure that the importance of the Coral-Eclipse is in their minds, which I'm sure it must be."

It is not only officials in Britain who are positioning themselves in the battle to attract Winx, with Horse Racing Ireland chief executive Brian Kavanagh believing Waller and the team ought to consider the Qipco Irish Champion Stakes at Leopardstown next September.

"If Winx does come to Europe, we'd love her to stop off in Ireland and run in the Irish Champion Stakes, which year after year produces terrific fields," he said.

"She's a superstar and there's nothing Irish fans appreciate more than a good horse, so we'd love to have her at Leopardstown and would be happy to work with her connections to make that happen."

Also pitching for the prize is France-Galop chief Olivier Delloye.

He said: "If the team is looking at a race at Ascot then arriving a bit earlier in Europe and getting a race into her in a Prix d'Ispahan in a completely renewed Longchamp would be a marquee moment.

"The alternative would be that she came to Deauville, where the Jacques le Marois is a mythical race and would be a great complement to the Queen Anne over Ascot's stiff mile."

Ladbrokes responded to Waller's statement by making Winx a 3-1 chance to win any race at Royal Ascot and the firm go 10-1 for her to go unbeaten in a three-race European campaign.

If you are interested in this, you should read
Waller warms to European campaign

FIRST PUBLISHED 5:32PM, SEP 20 2017
I would imagine we would see a repeat of the kind of crowds we saw in Federation Square in Melbourne watching Black Caviar in the middle of the night