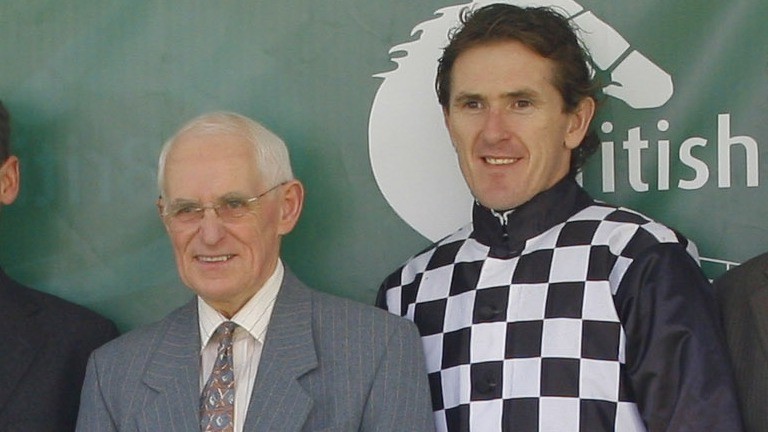 Stan Mellor alongside Sir Anthony McCoy when both were receiving Legends of the Saddle awards in 2009
MARK CRANHAM
1 of 1
By James Burn UPDATED 9:41AM, AUG 2 2020

An attitude to fitness that was arguably ahead of its time helped Stan Mellor enjoy a stellar career in the saddle, one that became a benchmark for other riders to match, two of his many admirers remembered on Saturday.

Mellor died at the age of 83 on Friday night after a long illness. He had been in hospital for two weeks, but returned home a few days prior to his death.

A superb jump jockey – the first to ride 1,000 winners – he was crowned champion three times.

His big-race victories included the Champion Chase on Sandy Abbot in 1963, while two King George VI Chases were captured on Frenchman's Cove in 1964 and five years later thanks to Titus Oates.

Legendary 20-time champion jockey Sir Anthony McCoy paid tribute, saying: "Stan set the benchmark for a lot of us. He was the first jump jockey to ride 1,000 winners and was a history maker. He was a neighbour of mine and lived down the end of my road [near Lambourn] when he finished training.

"He was a great man who set the standard and that benchmark for jockeys to ride 1,000 winners over jumps."

Titus Oates was trained by Gordon Richards, whose son Nicky took over the licence at their base in Cumbria in 1997.

He said: "Stan wasn't the biggest of riders for a National Hunt jockey. He used to wear a waistcoat with lead in it under his colours, but he was a very fit and capable jockey.

"He won the King George on Titus and he wasn't an easy ride – he was a bit of a tearaway – but Stan got a fine tune out of him, and he was an absolute gentleman, who got on great with my parents. Any time you saw him, he'd never walk past you, he was a lovely man."

Sad news regarding Stan Mellor. I used adore a picture he sent my Grandad of Stan soaring the last and Michael snr stood by it, watching on, having fallen there the circuit before. He’d written ‘The finest view in Europe’ on it. First man to ride 1000 winners and a gentleman. RIP

Richards, who recalled being beaten in an amateur Flat race at Beverley by Mellor's wife Elain, added: "He was a top-class jockey, one of the best around, it's as simple as that. As I say, he was smaller than the average jockey, but his fitness was an advantage and he was a bit of a fitness fanatic.

"He had a very good career, as being the first to ride 1,000 winners shows. He was a leader of his time. He wouldn't have ridden Titus if Father hadn't been a big fan."

Taaffe's son Tom, who trains in County Kildare, said: "Mr Mellor was always spoken of very highly in our house when I was growing up. Obviously Stalbridge Colonist in the Hennessy was a well-known event and memory."

Taaffe, who saddled Kicking King to win the Cheltenham Gold Cup in 2005 and to a brace of King Georges, added: "There was plenty of respect and admiration for him from Dad.

"The amazing thing, which people sometimes forget in racing, is that jockeys and trainers can be great friends, but when the white flag goes up it's every man for themselves and they'll fight like dogs. That's what would have happened back then when they were riding, but they would have been able to have a drink and have no issues after."

Mellor was described as the brightest jockey of his era by Brough Scott, who said in a tribute on ITV's coverage of Glorious Goodwood on Saturday: "He was an upright, doll-like figure wrapped deep around his horse and his speciality was to switch positions and attack the last fence with fantastic timing.

"No-one has ever done this better or more famously than the day he beat Arkle on Stalbridge Colonist."