Shishkin v Energumene round two could be 'even more exciting' - Henderson 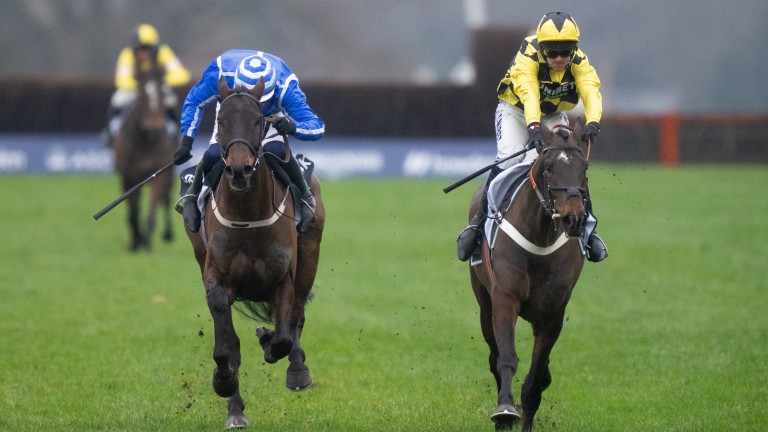 Will Energumene (left) turn the tables on Shishkin at Cheltenham?
Edward Whitaker (racingpost.com/photos)
1 of 1
By David Carr UPDATED 8:08PM, JAN 23 2022

Nicky Henderson has warned that the Betway Queen Mother Champion Chase is still open, despite Shishkin's epic defeat of big rival Energumene at Ascot – and predicted the rematch could be "even more exciting".

His unbeaten chaser was slashed in price for the two-mile championship event at Cheltenham in March and is now a best-priced 4-6 favourite.

The Willie Mullins-trained Energumene, who made the running in Saturday's Clarence House Chase and looked the winner for most of the way, only to be overhauled by Nico de Boinville's mount in the final 100 yards and beaten a length, is available at 3-1.

However, Henderson, who has won the Champion Chase a record-equalling six times, believes it is still all to play for on March 16.

The six-time champion jumps trainer, speaking at Lingfield on Sunday, said: "We can have a couple of quiet weeks and then we'll start to crank it up for the rematch. God willing they both get there in one piece and we'll try and serve it up again.

"He stays well and Cheltenham is a stiffer track, but it will be a serious rematch and they'll be wanting it as much as we do."

Referring to a previous era when he had an undisputed two-mile champion, he added: "Sprinter Sacre was so dominant whereas this time we have two."

Reflecting on what Saturday's race means for Cheltenham, Henderson said on Racing TV's Luck On Sunday: "It hasn't signed, sealed and delivered the Champion Chase. It's going to be even more exciting next time.

"When it's as close as that, there's nothing in it. Willie and I have a job to do, which is to get them there in March for round two, and that is going to be as exciting as round one was, I suspect.

"If one of them had won by ten lengths, the Champion Chase might have become a rather damped-down race." 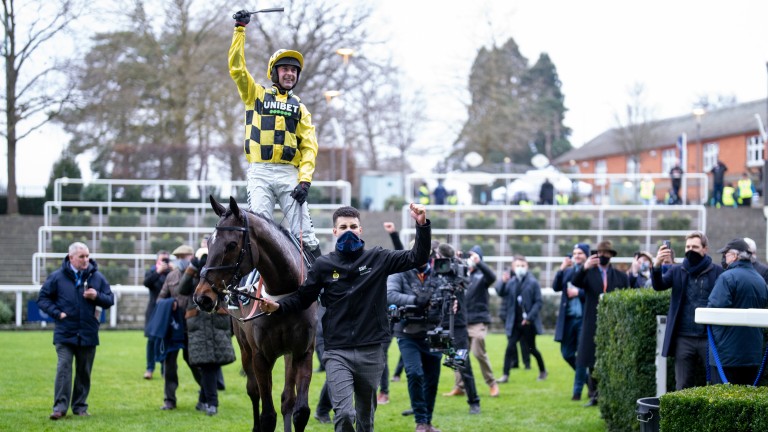 However Willie Mullins fears that Energumene faces a stiff task in trying to reverse the form at Cheltenham, and said on Sunday: "We're going to have to find a different way of trying to beat him.

"Yesterday it looked as though we had him beaten everywhere apart from the last 100 yards. Maybe going left-handed around Cheltenham might suit our fella, I don't know, but Shishkin has been there and done it so we have an uphill climb ahead of ourselves.

"It was a tremendous performance from both horses and both riders. Our fella arrived back this morning sound and well as far as we could see. We live to fight another day."

Jockey Paul Townend said: "Where we're going to find a couple of lengths, I'm not sure, but on a different day at a different track you might get a different result. But, credit to the two horses, they tried their heart out. It was a proper showdown and it was nice to be a part of it. It was just disappointing to be beaten."

Mullins heaped praise on the Ascot crowd for adding to the occasion, and said: "Energumene got a huge welcome back into the enclosures afterwards – it showed the crowd appreciated it.

"A lot of people at Ascot were saying to me they had never seen such a welcome back into the winner's enclosure for a horse who had finished second, as well as the winner. I think everyone appreciated it."

Reliving Saturday's encounter, Henderson said: "The only sad part of it is there didn't deserve to be a loser. That was the only bit that seemed unfair. But it lived up to the billing and it was an epic. On its own, that was one of the best races we'll never forget."

The trainer also hinted at a potential third clash between Shishkin and Energumene at the Punchestown festival in April.

Outlining plans beyond Cheltenham, Henderson said: "If he's up for either Aintree or the Celebration Chase [at Sandown], which is a race we've always enjoyed with Sprinter and Altior, or Punchestown – maybe I'd be stupid enough to go and take Willie on in his home game!

"Whether I'm brave enough for that, I'm not sure. That would be the ultimate clash, to have an away game."

De Boinville admitted to being "amazed" by Shishkin, a horse he has ridden in every one of his 12 races under rules.

The jockey said at Lingfield on Sunday: "Turning in was the only time I thought 'we're cooked here and we're going to have to pull out something special' and he duly did, which I was quite amazed by.

"It was like being at the football and fabulous to be taking part. It takes two to make such a race like that and all credit to Energumene and the connections for coming over and serving it up to us.

"We all ran our race and it created such an atmosphere. The crowd really responded to it and the whole place was rocking and rolling. It was a special place to be."

A race for the ages: watch Shishkin win a thrilling Clarence House

What does the Shishkin v Energumene thriller mean for their Cheltenham chances?

Racing Post Ratings: How high is he? Shishkin the best since Altior as he ascends two-mile ladder (Members' Club)