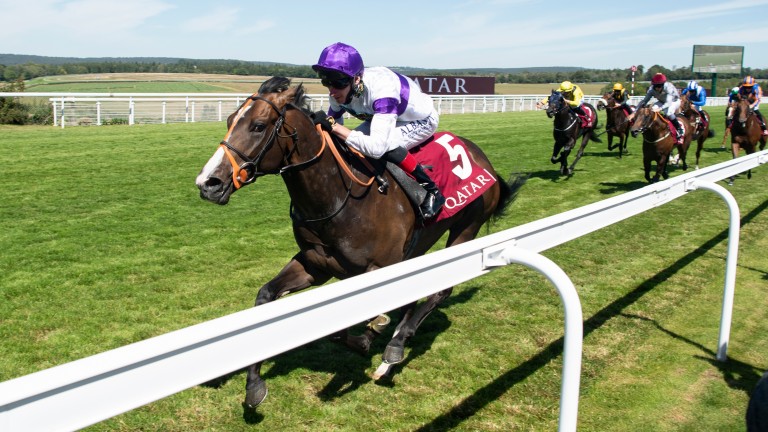 Clive Cox has left star juveniles Supremacy and Nando Parrado in Saturday's Juddmonte Middle Park Stakes with the trainer happy to let going conditions determine which of his Group 2 winners will contest the 6f Group 1.

Four-length Richmond Stakes winner Supremacy is Cox's preferred runner, but with an unsettled forecast the trainer opted to leave Coventry winner and Prix Morny runner-up Nando Parrado in the field, in case the going gets too testing for Supremacy.

"We confirmed them both this morning for the Middle Park, and I'm hoping that's going to be fine for Supremacy," said Cox on Monday. "We have Nando Parrado in there just in case as we're not sure what will come with the rain situation.

"He's also in the Dewhurst and Lagardere and we'll run him where the rain comes, and if it rains a lot this week the weekend comes into consideration."

Whichever horse Cox chooses to run may face Phoenix Stakes winner Lucky Vega, who could bid to get back on track at Newmarket.

Lucky Vega suffered bad interference at the Curragh behind winner Thunder Moon in the National Stakes and could renew rivalry with third-placed St Mark's Basilica, trained by Aidan O'Brien, at Newmarket.

The Jessica Harrington-trained colt features alongside impressive Group 2 winner Minzaal as ten horses stood their ground at the five-day stage.

Nando Parrado's fellow Royal Ascot scorers The Lir Jet and Tactical are possibles, with the unbeaten Method also in the mix.

O'Brien is also responsible for Lipizzaner, while further Irish interest is provided by the John Joseph Murphy-trained Charterhouse.

Dandalla, unbeaten in three runs and winner of the Group 2 Duchess of Cambridge Stakes on her last start in July, is the star name in a 12-strong entry for the Group 1 Juddmonte Cheveley Park Stakes on the same card.

Leading fancies Sinjaari, Tempus, Montatham and Top Rank feature among 40 entries to go forward for the bet365 Cambridgeshire at Newmarket on Saturday. Laser Show, a general 12-1 shot for Saeed bin Suroor, was a notable absentee.

Cox has Friday's Shadwell Rockfel Stakes lined up for Isabella Giles - should the rain come. On the seven-length Group 3 Prestige Stakes winner he added: "Isabella Giles ran well on soft ground, winning the Prestige. I'd prefer a slower rather than quicker surface for her and she has other entries if the ground for the Rockfel is too lively, but she's in great nick and we'd love to run her if the ground's okay."

FIRST PUBLISHED 2:07PM, SEP 21 2020
We'll run him where the rain comes, and if it rains a lot this week the weekend comes into consideration