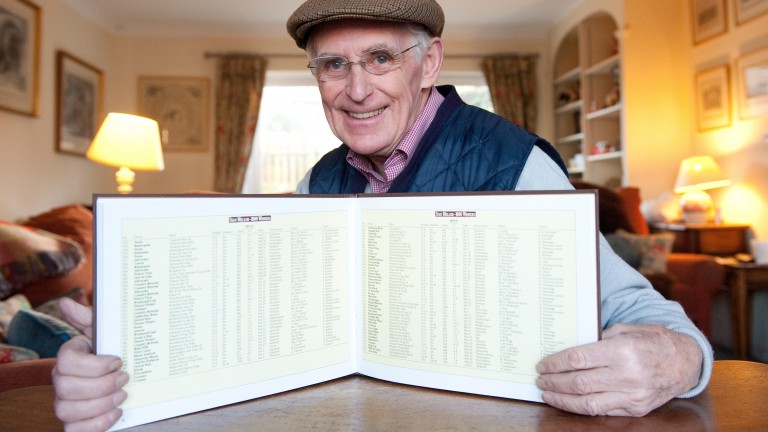 First published in the Racing Post on Sunday, April 29, 2018

Originally I wanted to be a professional show-jumper but my dad encouraged me to go into racing instead. He had a timber yard in Salford, near Manchester racecourse, and from there I could hear the commentaries on the public address speakers.

In 1948 when I was ten he took me to the New Year’s Day meeting and I saw Freebooter win the Victory Chase ridden by Tim Molony. He and Fred Winter became my idols. Apart from being great riders they knew how to roll brilliantly when they fell; something you don’t see modern day jockeys do very often.

Little was I to know that 13 years later I would win the race myself. It was on the best horse George Owen ever trained, Sandy Abbot. That season was the second of my three successive wins in the jump jockeys’ championship.

I went over to ride in the following race, the French Triumph Hurdle – Fred Winter had rides in both big races though.

In the Grand Steeplechase he was on Mandarin. Watching from the stands it soon became apparent that something was seriously amiss. It turned out to be a broken bit and Fred was facing nearly four miles without steering. It was unbelievable. The French jockeys were wonderful; they helped guide him round. But it was Fred’s own skills that were supreme and he won by a head. In a Racing Post poll it was voted the ride of all time.

I made my way back to the weighing room to get ready for my ride and in comes Fred. He is absolutely knackered not only because of all the energy he’d used up but because he’d also been wasting to do 9st 11lb on his other ride. He was so exhausted that I and a couple of others had to help him on to the scales. After weighing in he couldn’t make it up the stairs to prepare for the next. There was no chair for him to sit on so I propped him up against the wall to wait for the valet to come down with the colours.

I made sure I was at his side when he tottered back to the paddock. They got him up on to Beaver II and, amazingly, a few minutes later he was returning once again to the winner’s enclosure.

Fred was fairly unambitious. By that stage of his career he was wanting to give up riding over jumps. Indeed there were three courses he refused to ride at. Wetherby was one where the fences were very stiff. His plan was to waste a bit more and earn a living riding on the Flat and wait for a vacancy for a starter’s role to come up. How different National Hunt history would have been if one had arisen.

In that ‘ride of all time’ poll, I was at number 21 with my win on Stalbridge Colonist when we beat Arkle in the 1966 Hennessy.

Four years earlier at Kempton I had used the same tactics on King’s Nephew to get the better of Arkle’s old rival, Mill House. Because it was on a weekday the race wasn’t on TV so only those there saw it. This should have been Mill House’s race. He was odds-on.

We’ve started to round the home bend and I was in fourth tracking Josh Gifford who was rowing along. I shouted to Josh in a sort of loud whisper “Josh, Josh, let me through”. I wanted him to hear but not Willie Robinson on Mill House who was about four lengths clear and cruising. Josh then moved off the rail and waved me past just like a cyclist would signal to a car when it’s safe to overtake. I slipped up the inner but still didn’t want to get too close to Mill House because it was important that he and Willie continued to feel they were winning. It was vital I didn’t alert them.

Like Stalbridge Colonist, King’s Nephew had one burst of speed which you had to conserve. What you can’t do with horses like these is to switch them to the outside early because they’ll then go and use up that one bit of speed too soon.

In those days there were only two fences in the home straight and, though not that big, in common with all of them at Kempton they were built like brick walls.

Coming to the last I’d now crept closer and that was my cue to use the burst of acceleration I’d been saving up. We landed in full flight and won by half-a-length.

Although there is no film of the race I’ve got a photo in my ‘Fast At The Last’ collection.

I rode King’s Nephew in the following season’s Cheltenham Gold Cup but, like the other two runners, he was no match for Arkle. A young Mark Prescott led him up that day.

Sandy Abbot was a sweet horse and this was his day. The hot favourite Scottish Memories was one of the Irish bankers at the festival and but for a bit of interference in running he would have won.

I jumped the last about four lengths clear but Sandy Abbot was dog tired and weakened rapidly up the hill on very soft going. A stride after the post Scottish Memories was in front.

As always, I used the whip sparingly. I’ve found the most effective way of getting the best out of a horse is to connect to their body and to their brain. You can connect to the horse’s lower body by giving it a good squeeze with your legs and to its brain by using your hands via the reins. I’ve never seen a picture of me when I’m not riding with a straight rein. Jeff King said I was the hardest jockey to beat. And I found him my toughest opponent.

Watch television nowadays and you’ll see plenty of jump jockeys with big sloppy reins; not so much Flat jockeys. It’s more like shooing a dog out of your house than riding.

I was thrilled to win the Champion Chase for George Owen. He never gave me riding instructions. Instead he’d chat about the horse, the going and what sort of race it might be. That’s the best way to talk to jockeys. I did the same when I became a trainer.

In contrast, during my early days riding for Tom Jones he would give me orders. I would always jump off obeying them but if it became apparent they weren’t suiting the horse then I would immediately do my own thing. So if you wanted to avoid getting in trouble with a trainer you always set off as instructed and not be seen to be ignoring the orders too early.

When I moved south from Cheshire it was to be up against the best jockeys and be on the best horses. One of the very best was Stalbridge Colonist, a grey who Ken Cundell trained to win 11 races in the 1965-66 season including six chases on the bounce in the space of 43 days. I was on him for five of those six. His owner was a bit of a sore loser, a football club chairman, but he didn’t have much to complain about around that time.

Stalbridge should have won the Gold Cup the next season. That day there was frost and to ease the slipperiness on the walk from the paddock to the track they put down scalpings (the mixture used for the base of driveways and patios).

Ken noticed before the earlier races that these scalpings were clogging up in the horses’ hooves. So being a bit of a perfectionist he had a lad down at the end of the walkway to pick his feet out. Unfortunately during the process the off-fore shoe got loosened, leaving the lad no option but to pull it off completely. So I had to canter down holding it. The blacksmith at the start did his best but unfortunately when the lad wrenched the shoe off it made the holes for the nails bigger; so not ideal for the blacksmith to work round.

Anyway, off we go but at about the third fence he stumbles and I think it was then that the shoe came off again. It took the gloss off him. He still ran a grand race and we were beaten less than a length by Woodland Venture. But he didn’t finish in the way that Stalbridge Colonist did best. I never spoke publicly about this. It would have been unkind to Ken. He didn’t deserve it.

FIRST PUBLISHED 3:02PM, AUG 1 2020
That was my cue to use the burst of acceleration I'd been saving up. We landed in full flight and won by half-a-length

Frankel: an imaginative retelling of the legendary story 'He'd try and chew your arm off! He wanted everything on his terms' Ed Vaughan: 'I just don't see the future in training horses here' Megan Nicholls: 'I'm an independent person - I was keen to see different things' Mick Easterby: 'I sold my false teeth and got £120. I'm a legend, you see' Hayley Turner: 'The ITV team are so much fun and I'd like to stay involved'