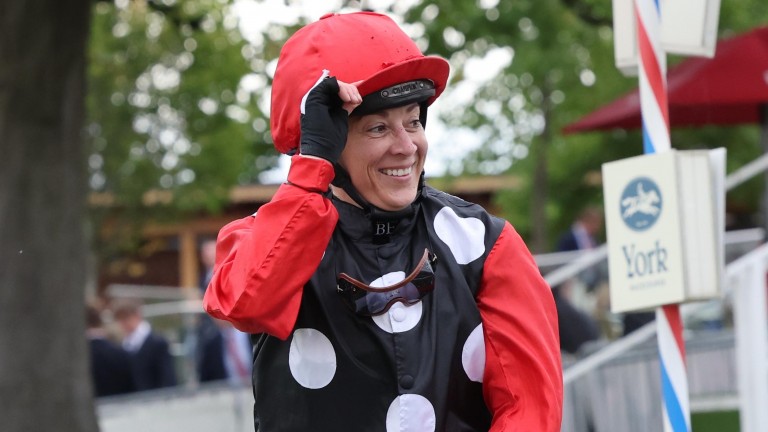 Hayley Turner salutes the crowd after riding her 900th British winner at York
John Grossick (racingpost.com/photos)
1 of 1
By Catherine Macrae UPDATED 9:59AM, SEP 25 2021

Hayley Turner turned on the style on Friday to land a milestone 900th British winner as she delivered a decisive victory on Master Milliner at York.

Turner romped home seven lengths clear of her nearest rival on the Emma Lavelle-trained runner in the 2m½f handicap on the last of three rides on the afternoon card.

The landmark win was the 42nd success of the season for the jockey, who enjoyed one of the more straightforward rides of her career as the five-year-old cruised to a ready win.

"That was a nice easy one to win, which is always nice," Turner said. "He's a lovely horse to ride and they went hard and it just really suited him.

"I'm chuffed to reach the milestone but I'd be happier if it was 1,000. To be honest it wasn't on my mind going into today but my agent messaged me to let me know and it's great to get there." 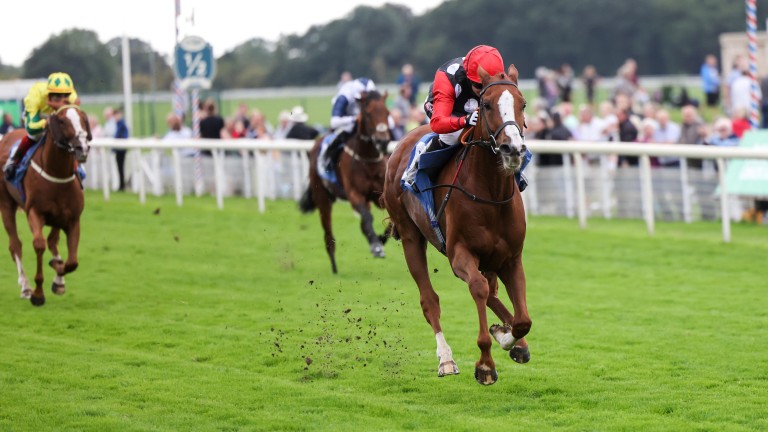 Turner made history as the first female jockey to secure a century of winners in a year in 2008 and then went on to win two Group 1s in 2011, the July Cup with Dream Ahead and the Nunthorpe on Margot Did.

Some 21 years since Turner's first success at Pontefract on the Mark Polglase-trained Generate, the 38-year-old jockey is enjoying one of her best seasons in recent years after doubling her winning tally from 2020.

Turner added: "I'm particularly pleased with how this year has gone. My agent Guy Jewell was my old agent and I didn't have him for a while. I've got him back now and I think that's made a huge difference for me.

"Andrew Balding has also been great and given me plenty of nice rides and it's just snowballed from there."

Turner, who rides at Chester on Saturday, is already looking ahead to her next century of winners.

"The plan is to keep going for that next 100 winners. I'm on the right track but still got a few to go!"

Almost €100,000 raised ahead of Coast to Curragh cycle in memory of Pat Smullen

Brian Kavanagh: how a bit of cheek at a job interview got him started