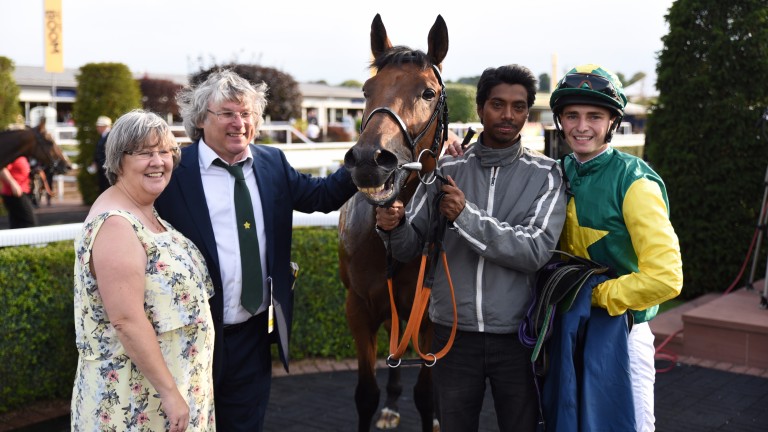 Salisbury's second race on Tuesday (1.35) marks the start of a new career for Ben James, a former amateur jockey now setting out as a trainer.

Having spent time at various stables in Britain and Australia, James has become the latest in a long line of licence-holders at Whitcombe stables in Dorset, where Toby Balding prepared Cool Ground for Gold Cup glory in the early 90s.

James is a salaried trainer to the stables' new owners, Michelle and Barry Crook, for whom he trains four horses. Vitalline, a three-year-old sprint handicapper formerly with Rod Millman, is the first of them to reach the track and was chalked up as the second-favourite in early trading to give James a flying start.

"I'm looking forward to it," the 27-year-old said on Monday. "There's that mix of excitement and nervousness but probably more excitement. I've been here a fair time now and I'd like to start paying back some of the faith Michelle and Barry have put in me."

James rode for three seasons as an amateur jockey, winning four times from 18 rides while working for trainers including William Haggas and Michael Bell. At the end of 2017, he flew to Australia in search of more experience and found plenty of it at the stables of Gai Waterhouse and Matt Cumani.

With 17 boxes licensed by the BHA and access to dozens more, James hopes to persuade new owners to send horses to the yard.

"We've got it all, we just need the horses and a bit of time to get going. We'd really like other people to get on board."

'Both my parents were teachers'

Jo Crowley, who trained from Whitcombe until 2016, still lives close by, as does her assistant, Tony Clark, and both have been helping James through the early months of his time there.

James, who had no family background in the sport, has been determined to train since his early teenage years.

"Both my parents were teachers. I was into football, rugby, tennis, but always had an interest in animals and that turned into watching racing on the telly and getting riding lessons," he said.

"When I was 15, I started doing weekends with John Harris in Melton Mowbray. I did three years there before I went to the British Racing School in 2012."

FIRST PUBLISHED 6:25PM, JUN 7 2021
There's that mix of excitement and nervousness. I've been here a fair time now and I'd like to start paying back some of the faith put in me