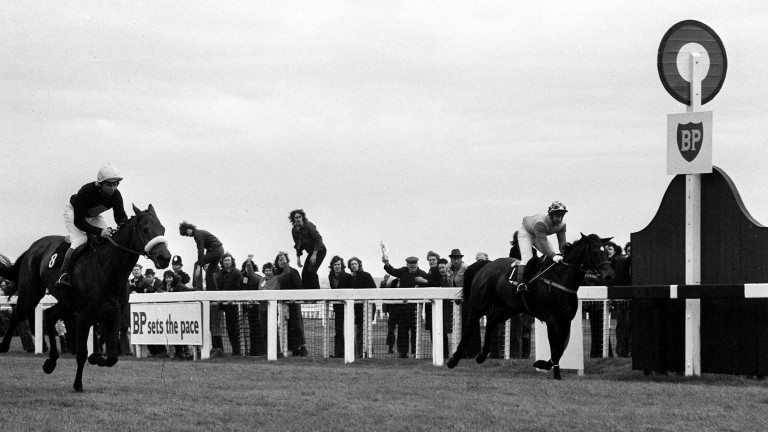 Listen to the words that nobody thought they would hear. "Crisp digs deep, comes again, wins it! Crisp has done it!"

No, it's not an April fool. One of the most famous Grand National losers, who was agonisingly caught in the final strides by Red Rum in 1973, has finally triumphed at Aintree.

Or at least he and Richard Pitman have gained a form of vindication exactly 47 years to the day, in a fantasy clash of all the unluckiest losers in National history.

47 years ago today Red Rum caught Crisp in an epic Grand National. Some of my favourites L'Escargot and Spanish Steps were behind. As Peter Bromley said in his radio commentary, " you'll never see another race like that it in a hundred years" pic.twitter.com/AMTy1uuqHu

The race was organised by Derek Thompson and called by him and ten other commentators, many of whom are usually behind the mic at the Aintree showpiece for real, with their effort posted on social media.

"It should have been Grand National week and we wanted to cheer people up in these miserable times, particularly health service workers," Thompson said.

"We thought we would try to do something different and Stewart Machin suggested why not have a National for the unlucky losers, give them another chance of winning?"

Devon Loch, who sprawled on the run-in with the race at his mercy in 1956, Honey End, who was stopped in his track in the melee at the 23rd fence in Foinavon's year, and Esha Ness, who 'won' the void race in 1993, were others given a second chance at National glory.

But the front-running Crisp, whose brave effort to hold off Red Rum when giving him 23lb has entered Aintree folklore, again jumped with the brio that characterised his 1973 effort, set up a similar lead and lasted home in front this time.

After calling the finish himself, Thompson interviewed Pitman who said: "Well Tommo, it's been a long time coming and I'm very pleased that we got there.

"I could hear them when I got to the second-last. It's agony going from the last to the elbow and up that long run-in, we were just grinding it out. What a privilege to be in a race with so many other good horses and jockeys."

Would Tiger Roll have done it? ITV to broadcast virtual 2020 Grand National

How to cope with no Grand National? Wallow in nostalgia and look forward to 2021