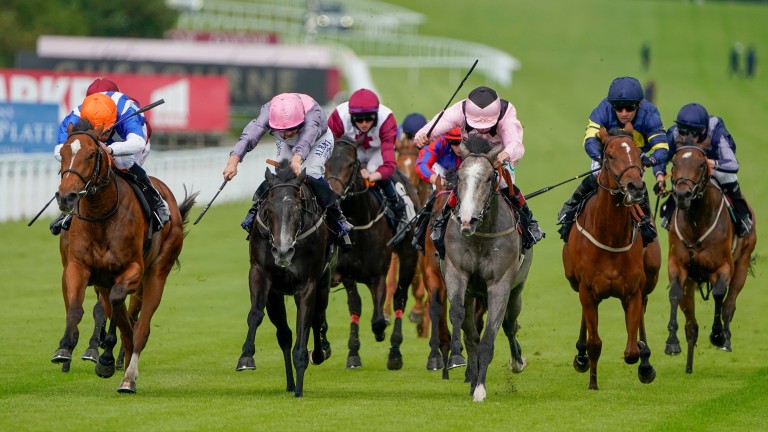 Rosa Mystica (left) wins the seller at Goodwood under William Buick before being bought back in for a record £38,000
Alan Crowhurst (Getty Images)
1 of 1
By Tom Ward UPDATED 7:59PM, JUN 8 2021

Connections went to a record-setting £38,000 to buy back their two-year-old filly Rosa Mystica after she won the 5f seller at Goodwood on Sunday with one goal in mind – to win at next month's Qatar Goodwood festival.

The price betters the £31,000 paid for the then Robert Stephens-trained Quebec, who was bought back by his trainer after winning a novice selling hurdle at Exeter in 2015. On Tuesday Weatherbys confirmed the £38,000 Rosa Mystica fetched was a new record for a selling winner in Britain.

The Richard Hughes-trained Rosa Mystica, a two-year-old daughter of Mehmas, got up by a head to win the £15,000 race from Black Hill Storm on her fourth start.

Hughes said: "If she comes in at Glorious Goodwood the decision will have been justified, if she doesn't we'll be mad as we should have taken the money.

"Richard Gallagher owns her and he told me before the race that he would rather keep her himself. There's a good fillies' nursery back at Glorious Goodwood which we'd like to aim her at next."

Hughes added: "It wasn't that low a grade of race really as it was worth 15 grand, so the lot in there were certainly a bit better than your average sellers.

"We didn't really want to lose her, but if she'd got beat we would have lost her for £15,000. I did go into the race thinking she would win."

Hughes's confidence in Rosa Mystica was matched by punters in the pre-race market, with the filly eventually going off the 100-30 second favourite having been 6-1 earlier on Sunday morning.

Following three solid efforts in novice and maiden company, she was dropped in grade by Hughes for her fourth start and was always doing enough under William Buick to record her first win.

FIRST PUBLISHED 3:00PM, JUN 8 2021
If she comes in at Glorious Goodwood the decision will have been justified