Santa Barbara, one of Ballydoyle's brightest talents, has died after a pelvic injury worsened on Wednesday night, the star filly's trainer Aidan O'Brien has revealed.

Always held in the highest regard by connections, the exciting daughter of Camelot was ruled out of a tilt at the Breeders' Cup earlier this week. The top three-year-old was being treated for a fractured pelvis but was unable to be saved after further complications arose.

O'Brien told the Racing Post on Thursday: "Santa Barbara fractured her pelvis and unfortunately the fracture displaced overnight. It's obviously a real shame for everyone. She was a very talented filly." 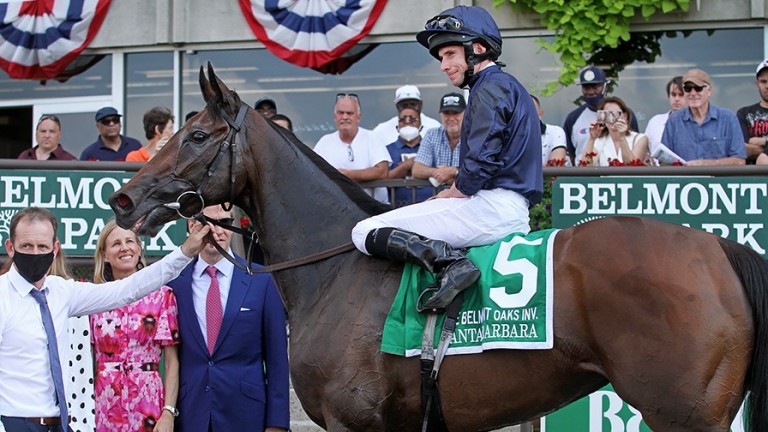 A half-sister to Breeders' Cup winners Iridessa and Order Of Australia, Santa Barbara was sent off 5-2 joint-favourite for the 1,000 Guineas after winning a Curragh maiden on her only start as a two-year-old.

In the months and weeks leading up to the Newmarket Classic O'Brien was not shy in his praise for Santa Barbara, saying she was "always at the top of the pecking order" of his two-year-old fillies and "on her homework she was always very impressive and very exceptional".

She finished fourth to stablemate Mother Earth at Newmarket before failing to stay when fifth behind Snowfall in the Oaks and then ran Thundering Nights close in the Pretty Polly Stakes at the Curragh.

That outing at the Curragh was the last time she raced in Europe as O'Brien and connections set their sights on top-level prizes further afield.

She went on to flourish in the US under Ryan Moore, winning the Grade 1 Belmont Oaks Invitational Stakes by half a length in July before returning to America to win the Beverly D Stakes at Arlington by three lengths last month.

Rated 116 at the end of her career, Santa Barbara raced for the Coolmore partners and Westerberg, the racing operation of Georg von Opel. In just six lifetime starts – of which she won three – Santa Barbara earned £534,541.

FIRST PUBLISHED 4:52PM, SEP 23 2021
Santa Barbara fractured her pelvis and unfortunately the fracture displaced overnight. It's obviously a real shame for everyone